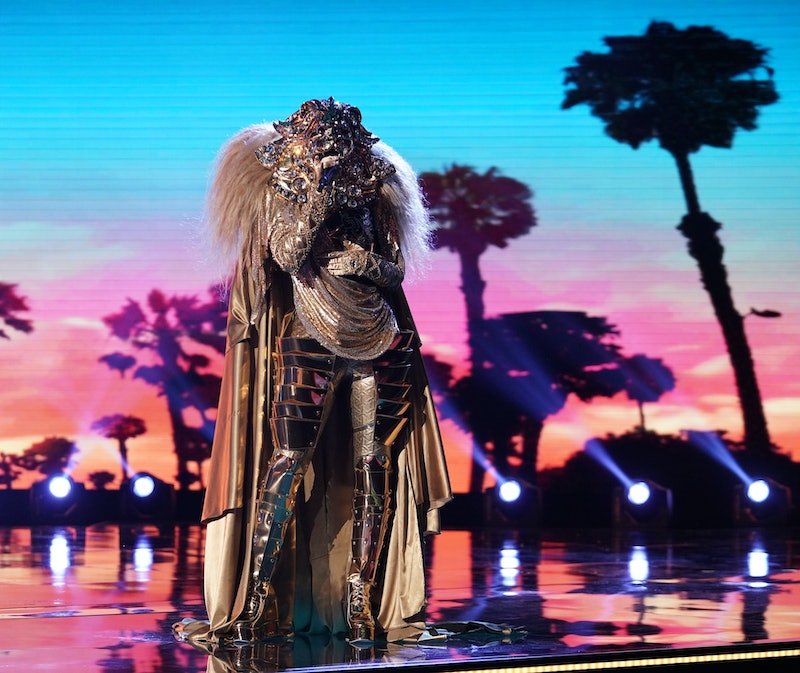 The Masked Singer has been steadily unmasking its mysterious cast of stars, but the remaining contestants have the judges panel stumped. However, folks at home seem to be better at playing this guessing game. And luckily, they have quite a few theories about who the lion is on Masked Singer.

Rumer Willis (actress, singer, daughter of Bruce Willis and Demi Moore, and a feverishly popular theory for this particular contestant) has already denied that she is the Lion — which is, of course, exactly what the Lion would say. However, it does encourage us to keep guessing until the mane and the mask come off. During the Jan. 30 episode, the lion sang Sia's arrangement of "California Dreamin'" — a song popularized by the Mamas & the Papas in the '60s. Everything from "sugar and spice" to "tick tock" and "let out my roar" were mentioned in the lion's opening clue segment. Those could be construed as references to so many musical artists, it's wild. And to make the whole thing even more confounding, the lion then brought out a scrunchie.

Some of the guesses on Twitter include scrunchie pioneer Debbie Gibson, Saved By The Bell star Tiffani Thiessen, Kesha herself, and even Mel B from the Spice Girls. Here are some of the strongest theories.

The Get Out star didn't really use her full vocal range on Girl when she was in character as Marnie, and even Peter Pan Live didn't show off all of her chops. Williams also did a cover of Kesha's "Tik Tok" that went kind of viral back in 2010.

Don't you associate scrunchies with Full House? Plus, Sweetin does have some singing talent.

While she's in a band and has sung on-screen before, Wood is more well-known for her acting than her vocal chops, and might not be the panel's first guess.

Early on, the lion said she had "a lot of women in her Pride," assumedly meaning family. Duff's singing career may be primarily linked to her sister Hilary, but she starred on Broadway as Laura Bell Bundy's replacement in Hairspray. It's possible, or in the Lion's case, paws-ible!

This was a popular pick on social media. As Diana Ross' daughter, she is Hollywood royalty. Look how shy she is in the above video, despite her natural talent! The lion mentioned The Wizard of Oz in the clues, and Diana Ross starred in The Wiz. There's also Tracee's sister Rhonda Ross, who has an incredible voice as well.

Her mother, Demi Moore, is also a scrunchie pioneer, and the lion sounds exactly like Rumer. Plus, Willis starred on Broadway as Roxie Hart in Chicago, and in the lion's previous appearance, the Hailey Times newspaper appeared, and Rumer Willis is from Hailey, Idaho. The Wizard of Oz clue could be referencing Willis' "Over The Love" Tour — like "Over The Rainbow," perhaps? Nicole Scherzinger also mentioned that the lion stood like a dancer, and Willis won Dancing With The Stars. All the clues add up! Is it possible she's just trying to throw us off the scent?

All in all, Rumer still seems like the mostly likely candidate, but for now, we'll have to take her word for it and keep on guessing.