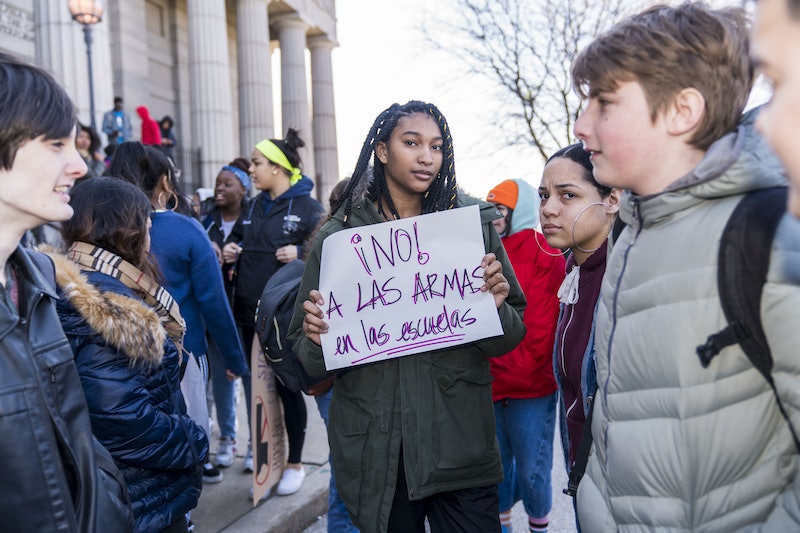 On Wednesday, students across the country walked out of school as part of the movement to end gun violence. Thousands of demonstrators participated, equipping themselves with fierce chants and poignant banners. During the event, images flooded social media of students marching out of school and brandishing protest signs for the National School Walkout.

In most places, the demonstration began at 10 a.m. and lasted for 17 minutes — one minute for every victim of last month's school shooting in Parkland, Florida. Several television channels paused their programming during that period to show support, including MTV, VH1, Comedy Central, and Nickelodeon.

Many walkouts involved speeches, marches, and other demonstrations. Students in Newton, Connecticut, where the Sandy Hook Elementary School massacre took place in 2012, chanted the names of people who have died as a result of gun violence.

Schools treated the walkouts with varying levels of tolerance. Some administrators informed students in advance that they would be disciplined for leaving class, while others said that they would not give punishments. In anticipation of the walkouts, several universities issued statements saying that students' participation in the walkout would not affect their admission decisions.

The powerful stories and images from the walkouts may motivate legislators as they continue to debate gun control measures in the coming weeks. Here are some signs from walkouts around the country.

"I Miss Feeling Safe At School"

These students are from Pittsburgh's Creative and Performing Arts School (CAPA). Last month activists at CAPA staged another walkout: They left school for 17 minutes during lunch and demonstrated in the city's Market Square. All participating students received a one-hour detention for their efforts.

These students walked out of Howard High School in Baltimore, one of at least nine schools in that county that participated in the demonstration.

Many signs honored students who have died as a result of gun violence. Here, a young student from Akron, Ohio, commemorates Meadow Pollack, an 18-year-old who was killed in the Parkland attack. Pollack was a senior and planned to attend college in the fall. She's remembered for having "a smile like sunshine."

Taking The Protest To The White House

Students in the D.C. area protested in front of the White House and then walked to the U.S. Capitol building, where they continued to demonstrate and were joined by some members of Congress.

These students are holding signs outside of Herron High School in Indianapolis. Students from the city's K-8 school walked out, too.

Many calls for gun reform in the wake of Parkland include heavy criticism of the National Rifle Association (NRA). Some argue that fear of retaliation from the NRA and its activist network has previously kept politicians from enacting gun control measures.

Elyria High School, in Elyria, Ohio (a suburb of Cleveland) created this banner for its walkout. Calling on students to sign it in the lunch room, the Twitter page for the demonstration wrote "Use your voice to help make history!"

From One High School To Another

Students at Pittsburgh's Baldwin High School held signs while standing in the snow during their walkout. They made this banner to show their support for Stoneman Douglas, the school where the Parkland shooting took place. Baldwin also gave students cards to write to politicians about gun reform.

A walkout at Rolling Meadows High School near Chicago was partially organized by a student activist organization, Mustangs Organizing for Social Transformation (M.O.S.T.). At the demonstration, students took turns standing on a platform and giving speeches to the gathered crowd.

Of course, a walkout also occurred at the school where this wave of gun control activism began: Parkland's Stoneman Douglas. Above, parents are waiting for the students to exit and carrying signs of their own.

Some students opted to put their messages on shirts instead of signs. Above, two students wear orange, the color of the gun reform movement.

The next massive gun control demonstration will be the March for Our Lives on March 24, when thousands of protestors are expected to take to the streets of Washington, D.C.