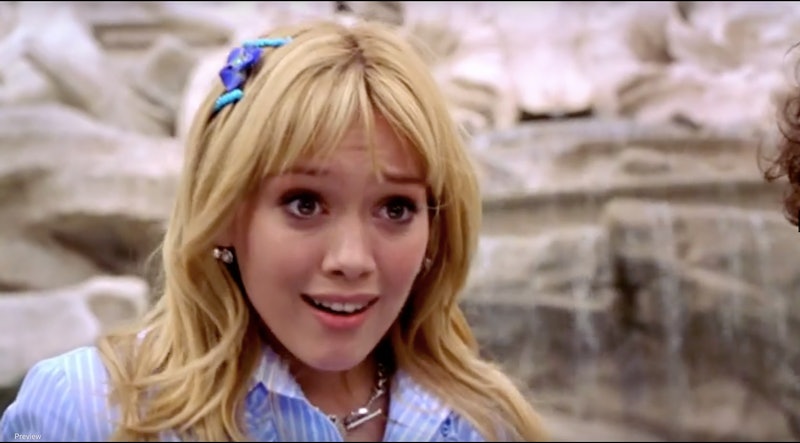 Hey now, hey now — this reboot is what dreams are made of! On Friday, Hilary Duff revealed new details about the Lizzie McGuire reboot, and fans will be so excited to hear what the beloved character is up to now. Duff discussed the iconic role on Good Morning America, assuring fans of the show that Lizzie would be just as relatable in her 30s as she was as a tween. The star — who warned that much of the reboot would be kept a secret ahead of the premiere — did offer a few details about her character's modern life, including her career, partner's job, and life in New York City.

During her GMA interview, Duff discussed Lizzie as a character, emphasizing how much she hopes reprising the role will mean to viewers. "She is everyone's best friend, and there are big hurdles to climb over when you're thirty," she said. "If she can be there for all the women that are going through what she's going through, I'm so happy to step into the shoes again."

Duff teased a few preliminary details about Lizzie's life as an adult, though much of the plot must be kept a secret. The actor said: "Right now, her life is framed pretty perfectly. She has her dream job — she's an apprentice to an interior designer who is a pretty big deal, she has a gorgeous fiancé who is a chef at this cool SoHo restaurant, she has a cute little apartment in Brooklyn, and everything is going her way."

The Younger star went on to reveal that the show will open during Lizzie's 30th birthday celebration, and that the the character quickly meets new obstacles. "Obviously nothing is going to go all that perfectly the whole series," Duff said. "She gets some pretty big news at the end of the first episode."

Of course, the actor couldn't reveal whether or not the gorgeous fiancé was Lizzie's longtime best friend and love interest, Gordo. When fans last saw Lizzie, she was kissing Gordo on a rooftop in Rome in The Lizzie McGuire Movie. Duff wouldn't confirm the romance will be continued on the show, but she did hint that fans of the onscreen couple wouldn't be disappointed. "I have to play it coy, there's a lot of surprises in store," she said. "I think everyone's dreams are going to be fulfilled."

"SURPRISE!!! I’ve been trying to contain this excitement for a loooong time while this has been in the works! I am beyond excited to be home again, back with my girl...and into her 30’s."

On GMA, Duff revealed that her animated alter-ego would also be making a comeback on the show, though the character will not be grown-up. "You're going to get to experience the animated Lizzie which is still her 13 year-old self, and still the loud voice inside her head that's saying all of the things adult Lizzie would be saying out loud," she said. "It was really important to me to keep her at 13 because I think that's really endearing."

The new Lizzie McGuire doesn't have a show title or a release date just yet, but the project will be among many exciting shows premiering on the forthcoming the Disney+ platform. Fans can look forward to Lizzie — and her animated sidekick — being back onscreen very soon.

More like this
Hilary Duff Is “Optimistic” About A 'Lizzie McGuire' Reboot
By Alyssa Lapid
This 'Gossip Girl' Wardrobe Error Has Gone Viral On TikTok
By Alyssa Lapid
'Abbott Elementary' Fans Probably Missed This 'Parent Trap' Easter Egg
By Sam Ramsden
At 28, Debra Jo Rupp Was Living A Much Different '70s Show
By Grace Wehniainen
Get Even More From Bustle — Sign Up For The Newsletter
From hair trends to relationship advice, our daily newsletter has everything you need to sound like a person who’s on TikTok, even if you aren’t.