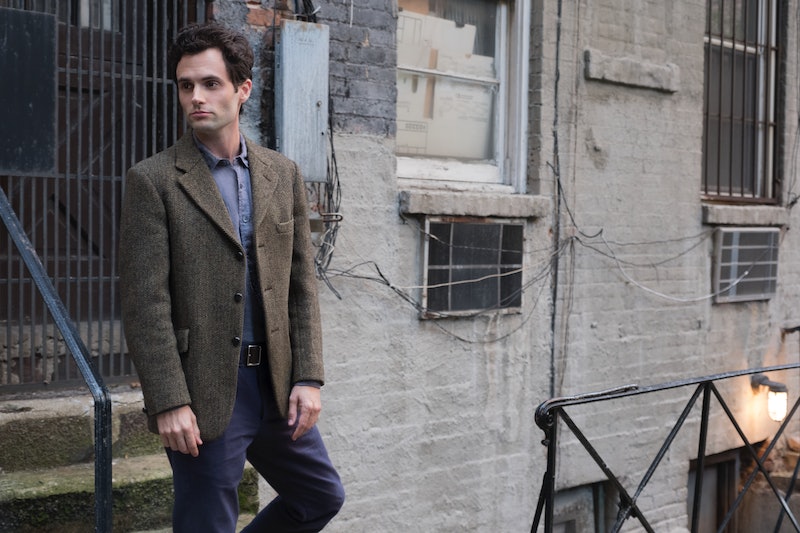 Your favorite romantic serial killer-stalker is back, and he's ready for a new obsession. Penn Badgley is returning as Joe Goldberg for the second season of Netflix hit thriller You, and, as these new photos from You Season 2 show, the professional stalker has a new fascination: Love. But, he's also got a new problem: his not-so-dead ex Candace.

In Season 2, staying true to Caroline Kepnes' novel Hidden Bodies, the sequel to the 2014 novel that inspired the hit series, Joe relocates from New York to Los Angeles, where he meets Love, an aspiring chef portrayed by Victoria Pedretti. Showrunner Sera Gamble told Entertainment Weekly in a new interview that although Joe wants to find romance again after Beck, he's taking a slightly different approach in achieving his goal. “It’s not that simple love-at-first-sight he might’ve been looking for a couple of years ago,” she said. “He’s a different guy. He’s been through more.” But don't worry, Joe's new approach still involves a lot of gazing from a distance, as seen from this new Season 2 photo.

According to Gamble, Love seems in tune with Joe's darkness and can tell that Joe has gone through loss. “The circumstances of his encounter with Love are very informed by what he went through with Beck," she remarked. Even Badgley teased in a previous interview with Digital Spy that Love brings out an unknown side of Joe. "She adds a dimension that hasn't existed yet," he said. "There's a side to Joe that we haven't seen yet because her character, in some ways, is the polar opposite of Beck."

As for the major Season 1 finale cliffhanger that saw Candace, Joe's ex-girlfriend who was presumably Joe's first victim, alive and well, that's also going to play into Season 2. Actor Ambyr Childers is returning as the character for a much bigger role in Season 2, and she's got some unfinished business with Joe, as seen in the second first look photo. “She is a survivor,” Gamble told EW. “And now she’s faced with some really difficult decisions about how she’s going to move forward.”

You's first season originally aired on Lifetime, but after reaching over 40 million viewers on Netflix, the series is now a Netflix Original. That said, don't expect the show to get an R-rated makeover. Despite switching to the streaming service, where's no time constraints and less content restrictions, Gamble said that fans can expect the same energy they loved from Season 1. “Netflix was clear they wanted us to give them a show that was like Season 1,” she said. “They basically said, ‘It’s not broke, don’t fix it.’” If this is any indication, prepare for another intense ride before You Season 2 premieres on December 26.