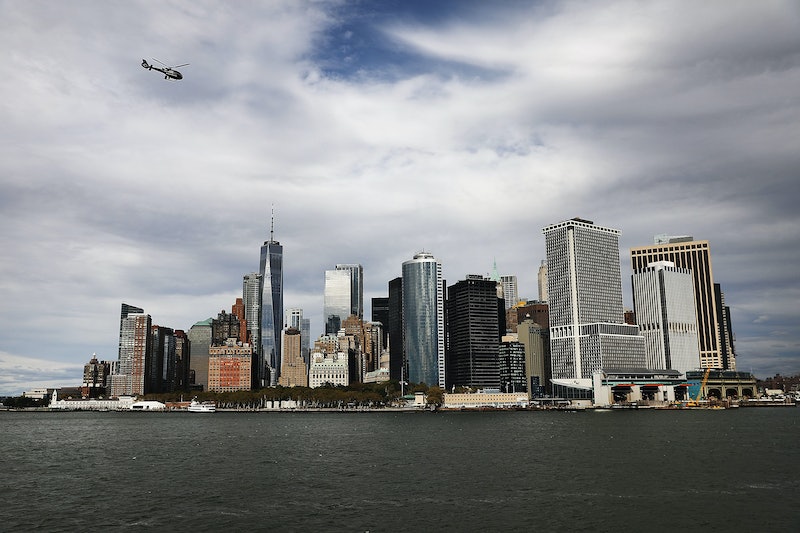 Talk about an unpredictable spring. On Tuesday afternoon, a seemingly out-of-nowhere thunderstorm hit the Northeast, including New York City. Photos of the ominous sky, the stranded commuters, and the damage it caused in some areas circulated quickly.

Weather forecast website AccuWeather reported that the winds in the Northeast could intensify into a "severe" thunderstorm and possible tornado on Tuesday night. In addition to the transit system pausing its services, city dwellers can expect power outage, hail, and even flash flooding.

AccuWeather also reported that states like New York, New Jersey, and Connecticut should prepare for powerful rain, thunderstorm, and strong winds. According to ABC News, tornado warnings have been issued for several New York counties like Sullivan, Orange, Ulster, and Dutchess. If you live in New York, New Jersey, or Connecticut, it's a good idea to track the potential movement and journey of the storm by checking AccuTrack's radar.

According to NBC News’ Storm Team 4, over 87,000 people are already without electricity in different parts of New York, Connecticut, and New Jersey. But the chaos is far from over as Team Storm 4 reported that locals in the area can expect winds to hit 70 mph later in the night

It's such strong weather that the Amtrak service between New York City and Connecticut has been temporarily suspended. The Metro-North service out of the Grand Central station has also been halted, leaving scores of commuters stranded.

Perhaps the best way to understand just how jaw-dropping the weather was for people in the tristate area on Tuesday is by looking at the photos and videos on Twitter. Here are just a few of them.

This Twitter user said that she didn't take the tornado alert on her phone seriously until this happened in her yard.

Another Twitter user juxtaposed a photo of what New York actually looked like outside of her window against a screenshot of her phone screen telling her it's a sunny day in the city.

This Brooklynite shared photos of grey and intimidating skies in his borough.

There's bad weather stalls traffic and then there's chaos apparent in the right lane of this photo.

If you ever needed visual inspiration for the cover art of your upcoming doomsday novel, remember this photo.

9. Brooklyn Under A Blanket Of Clouds

But not those fluffy, cute clouds, no. Think in terms of hell-on-earth clouds.

Maybe you're a fan of Harry Potter. If so, this photo might make you think that some soul-sucking dementors were ready to take over New York City.

Twitter user Alejandro Martinez tweeted a time lapse video of New York City from the 36th floor of the Empire State Building. It's one video that encapsulates the intimidating nature of Tuesday's weather.

12. Another Angle For The Viewers

Another Twitter user uploaded a video of the storm from New York's East Village, and it's quite something.

You might half-expect something to fall out of the sky when you look at this breathtaking photo of the storm in New York.

It's almost as if the lights went out in the city.

Look at those clouds rolling in.

Look at how they descend on the city.

You gotta love a good time lapse covering a storm.

These are only a few of the many photos to have come out on Tuesday. A simple search for "storm" and "New York" on Twitter will yield some pretty intense images and videos. If you're in New York, New Jersey, or Connecticut, remember that taking photos is fun but be sure to stay safe and dry, folks.