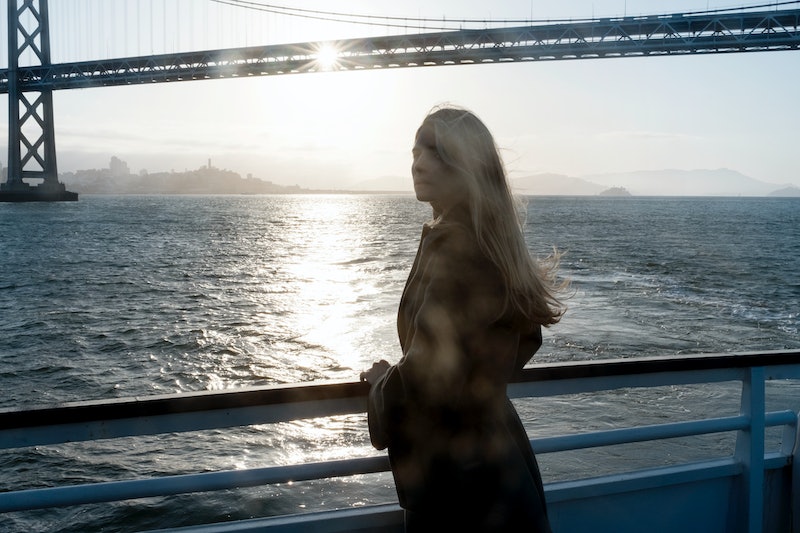 Spoilers ahead for The OA Season 2. To borrow a popular phrase, The OA did not need to go this hard, but it did. After a two year break, the Netflix series returned March 22, doubling down on its already mind-boggling twists and turns. But if you're still reeling after that meta finale, there are already a few theories about The OA Season 2 that help to maybe-explain what the heck is happening. And according to Jason Isaacs, who plays Hap, fans might be onto something.

"There are many theories," he said in a recent interview with Yahoo UK News. "We've read them, we've talked about them, but we don't want to confirm or deny any of them. But you can run them all by us. [...] Some of the craziest theories are closest to the truth, so I'm not going to say."

Not only that, but creators Brit Marling and Zal Batmanglij have absolutely been planting clues throughout the show. "Look, there are Easter eggs and clues throughout," Isaacs continued. "Unlike almost every television show, or certainly every television show I've ever been on, [Marling and Batmanglij] got the whole thing planned. They know where they're going; they know where these strands are going to overlap, what's going to come back and what's going to resonate."

Already picking apart everything that happened in Season 2? Here are some of the new theories after all that went down.

This thread, from Twitter user @RachelAzarova (clearly a fan) details how each NDE may be a clue, or a look inside, each dimension and each season of The OA. Season 1 Rachel's NDE takes place in their home dimension. Homer's took place inside the dimension where they're all patients at a mental institution, Joe Biden is president, and the house on Nob Hill is an all-consuming mystery — aka Season 2. Scott's took place in the meta dimension where they're all actors making The OA, which is presumably where Season 3 will take place. Prairie and Renata's NDEs would therefore contain details about the other two.

Since they got the movements in this order, this does seem like it explains where each season or "Part" of The OA will take place.

Could Riz Ahmed's character be the brother Old Night talked about, as this Refinery 29 theory posits? He came back swinging in Part II, with cryptic knowledge about the dimensions and a desire to help "her" and the boys.

On the other hand, OA does seem particularly drawn to Steve, and he's the one running after her in multiple dimensions. Could he be the boy who was adopted by the Johnsons instead of her in the second dimension? Or is he a more figurative brother — the one assigned to look out for her in one of the dimensions?

BBA's Glasses Are A Major Clue

A redditor pointed out that BBA, Hap, and Karim all wear the same frames. Coincidence? Not on a show as meticulous as The OA... and all three characters have the ability to sense other dimensions, too, so this theory could really hold water. Both Hap and BBA like to clear their heads by swimming. Whatever roles they have in this world are likely similar.

Elodie Knew Where To Find Hap

Redditor u/Pvdkuijt theorizes that Elodie knew where to find Hap because the version of her in the actor dimension had already performed the scenes with him that appear in Part II. So essentially, she'd already lived out those conversations, and was repeating them.

Sit down for this one. So, basically this theory says that all Netflix original series are connected — Black Mirror's "Bandersnatch," Stranger Things, The OA, Ozark, Maniac, The Crown, and so on. As outlined by the UK Express, it's based on the fact that series like Maniac, Black Mirror, Dark, and Stranger Things — the latter of which has been mentioned directly on The OA — all deal with different dimensions and dreamscapes. It's also been hinted at in other shows: in Black Mirror: Bandersnatch, there seemed to be a tiny reference to The Crown.

As Isaacs said, the show's creators have a plan, and they've already laid the groundwork for what they want to reveal later. So keep watching — and rewatching — and perhaps things will start fitting together.