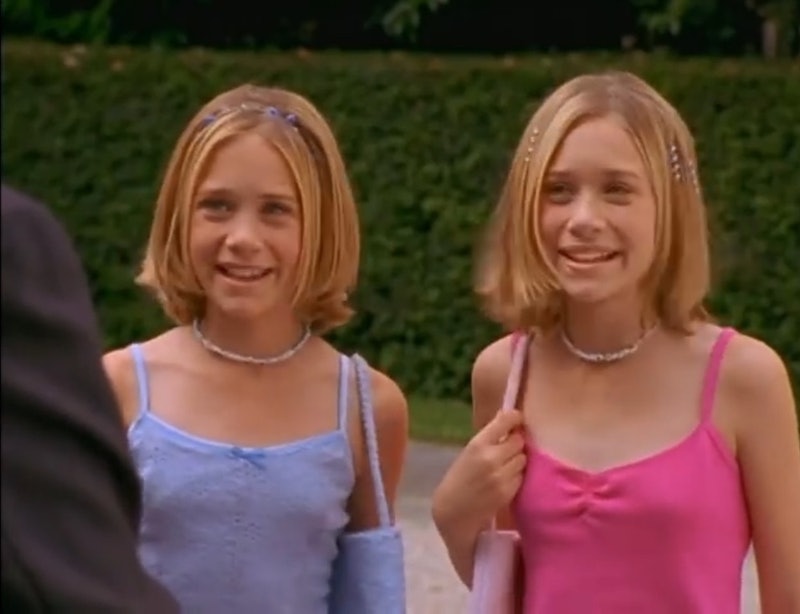 Get ready to double your fun because some of your favorite late '90s Olsen twins movies are coming to Hulu next month. Beginning on May 1, Hulu users can begin streaming 1998's Billboard Dad, as well as the back-to-back 1999 classics, Passport to Paris and Switching Goals. And just in case it's been a (New York) minute since you've seen one or all of the former Full House stars' movies, here are a few quick synopses to bring you up to speed.

In Billboard Dad, the now-32-year-old sisters played matchmakers for their widower artist father, Max (Tom Amandes), by — you guessed it — taking out a personal ad of sorts on a billboard. As Amazon describes the plot, "Although Max receives an overwhelming number of responses, magic strikes when he meets Brooke Anders (Jessica Tuck). But when Max's agent interferes, it's up to the girls to once again play cupid and reunite Brooke and their Billboard Dad."

Passport to Paris finds that teens on an overseas visit to their grandfather, and, as the voiceover in the trailer asks, "What do two all-American girls do in the City of Lights? "Shopping," the girls, o course, say in unison. Also on their itinerary: ditching their "geek" chaperone, meeting a "tres chic" supermodel, and, naturally, falling "head over heels for two French boys."

Finally, the made-for-TV Disney movie, Switching Goals, employs the typical twin stunt of covertly changing identities. In this comedy, M-K and Ashley are "soccer-playing sisters who scheme to trade teams by secretly trading places," per Amazon. "But as the plan unfolds, there's chaos on and off the field." What could ever go wrong?

By now, Olsen fans know all too well that this may be the only way they'll get to see their favorite twins on the small screen again — save for any Full House re-runs anyway. After all, the women famously retired from acting in 2012 to focus on their booming fashion careers. Not even the prospect of Tanner family fun time got them to make an apperance on Netflix's Fuller House reboot.

During a Season 1 episode of Fuller House, Bob Saget's Danny Tanner explained that the Olsens' character Michelle's absence was due to the fact that she was "busy in New York running her fashion empire.” (The cast also not-so-subtly all stared into the camera at that point. The shade.)

In 2016, Jodie Sweetin AKA Stephanie Tanner revealed to Entertainment Tonight that producers “tried everything” to get the Olsens on the show but finally got to the point where they'd “kinda given up” even asking.

"Although Ashley and Mary-Kate will not be a part of Fuller House, I know how much Full House has meant to them and they are still very much considered family. It has been exciting to see how they have built their professional careers, and I support their choice to focus on their fashion brands and various business endeavors. I appreciate their support and good wishes towards Fuller House."

Despite a TV family reunion being off the table, Mary-Kate and Ashley remain as close as ever, as evidenced during a rare joint interview with WSJ. Magazine in August.

“It’s been 32 years of learning how to communicate,” Ashley shared. “We do everything together." Added Mary-Kate, “We came out of the womb doing that.”

Soon, thanks to Hulu, fans will be able to soak up all that nostalgic sibling love all over again.