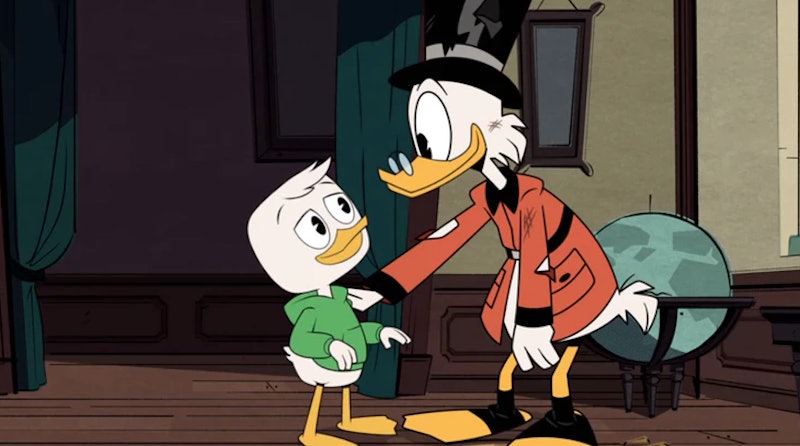 Huey, Dewey, and Louie are back for more mischief, mystery, and misadventures to share with a new generation of DuckTales fans. The beloved animated series rebooted with a one-hour special on Disney XD, leading up to a new series. While the show boasts fresh adventures and a new cast, many things about DuckTales remain unchanged from the original series, which premiered 30 years ago in 1987. When watching the DuckTales reboot premiere, I couldn't help but notice many references to the original DuckTales.

While some things have changed in Duckburg, others have stayed the same — like the DuckTales theme song. The original DuckTales intro is now performed by vocalist Felicia Barton, but much of the intro is similar to the old title's. Both the original show and the reboot's opening feature a shot of Scrooge McDuck's signature dive into his gold — something he also does in the special premiere episode.

The TV movie begins with a recognizable scene: Huey, Dewey, and Louie trying to push Uncle Donald out the door so they can cause trouble. But, what's different is that within the first few minutes, Donald Duck answers a cell phone and puts on a suit.

Donald's voice (Tony Anselmo in this version) will be familiar to Disney fans. The other voices are also notable, because the cast has some big names. Bobby Moynihan voices Louie (the triplet who wears green), Danny Pudi is Huey (in red), and Ben Schwartz plays hard-headed Dewey (the duck in blue). David Tennant completely sells the role of great-uncle and ex-adventurer Scrooge McDuck with just his voice. His talent and charm come through in every line, similar to how Robin Williams portrayed the Genie in Aladdin. Beck Bennett is on hand as pilot Launchpad McQuack, and Kate Micucci voices Webby, whose wardrobe thankfully has gotten an upgrade for 2017.

In the kickoff special, Scrooge watches the triplets while Donald goes to a job interview. At his home, the boys discover that Scrooge has an impressive past as an explorer. There are nods to the many monsters and capers featured on the original series. Fans also get reacquainted with McDuck Manor and Scrooge's love of money and treasure. While Webby shows the boys around the mansion, they discover a picture of Donald in his usual sailor garb, another reference to the beloved characters' past. Donald dons the outfit later in the episode, too.

While the adventures will be different, the technology will be a little updated, and the voices have changed, the wit and heart of the original series still comes through. There is a scene during the climax of the episode where Scrooge, being his usual gruff self, is unknowingly mentoring the especially stubborn Dewey. Scrooge tells Dewey to stop showboating and use his head. "Work smarter, not harder," he says, and the boy takes the advice. The episode also touches upon, without being heavy-handed, adults letting go and learning to trust children, as well as not shutting out family.

The jokes and the journeys are just as enjoyable as ever in Duckburg. While the show will be a blast from the past for fans of the original series, the reboot also has the immediacy to enlist a new generation of fans.

More like this
The 'Hocus Pocus' Sequel Finally Has A Release Date & It Makes Total Sense
By Shannon Barbour and Radhika Menon
Everything To Know About 'Scream 6'
By Jack Irvin and Jake Viswanath
Emma Thompson, Lashana Lynch, & Stephen Graham Lead Netflix’s 'Matilda'
By Sophie McEvoy
Vanessa Hudgens Proves She's Always A Wildcat At This 'High School Musical' Location
By Alyssa Lapid
Get Even More From Bustle — Sign Up For The Newsletter