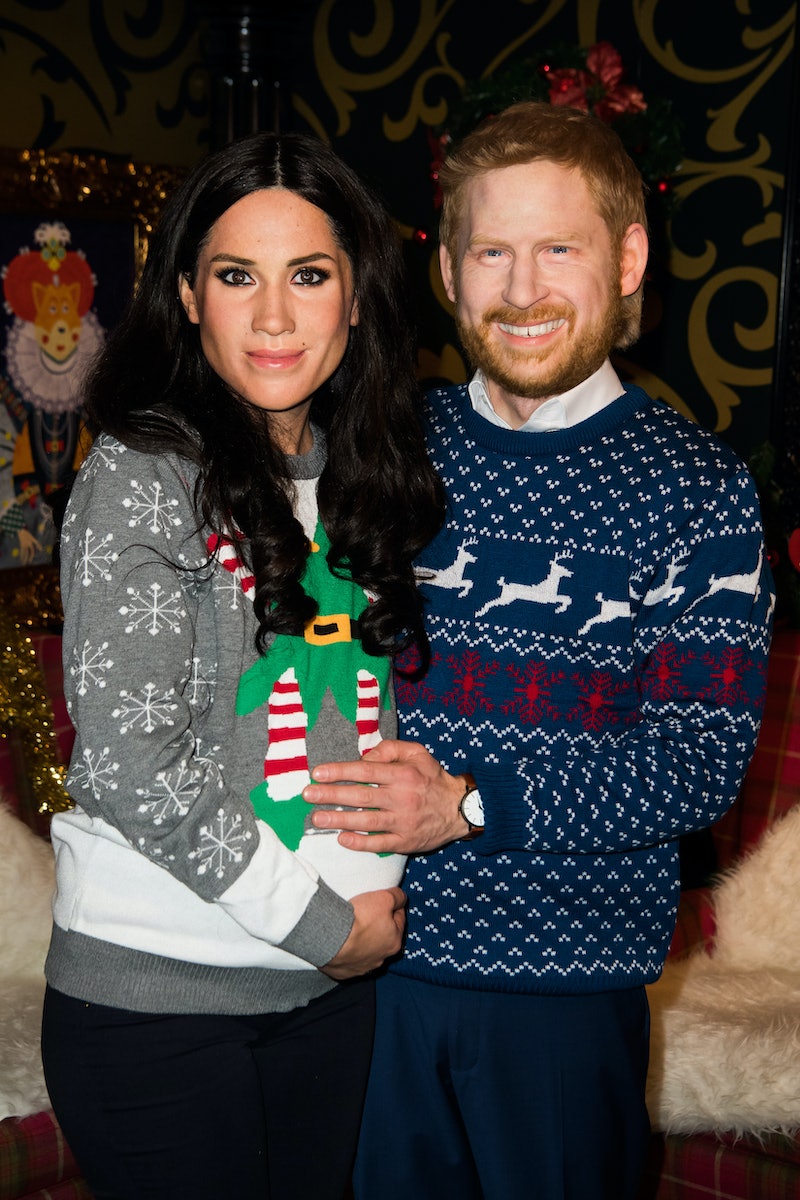 So, you've read the headline and you're now reading this, which already means that you are very brave. You should know, though, that describing the Prince Harry and Meghan Markle wax masks, per Us Weekly's report, as "terrifying," or "unnerving," or "the stuff nightmares are made of," etc., would by no means be an exaggeration. Seriously, you've been warned. Proceed with caution, friends and loved ones.

Tuesday, Dec. 11, is a day that shall henceforth live on in infamy for royal family fanatics. Because on that day, Madame Tussauds unveiled their wax mask replicas of Harry and Meghan's faces — and wow, are they memorable. According to Us Weekly, the masks debuted at the museum's Berlin location, and they're not just like, hanging on the wall for visitors to view — they're being worn by two royal impersonators. Markle's wax mask impersonator is even equipped with a burgeoning baby bump, just like the 22-weeks pregnant (as Parents predicts) duchess herself.

Such an attraction, in and of itself, must be slightly jarring to stumble upon, but here's the thing: Not only are the impersonators wearing the masks, they're actively doing things in the masks. Really weird — and at times, somewhat inexplicable — things, for that matter. Again, you've been warned.

OK, so these first two are pretty tame. Thought it'd be best to let your eyes adjust before really getting into it. The masks definitely don't do the in-real-life royal couple justice, but the impersonators' poses are standard.

In each of the photos above, "Markle" and "Harry" are all decked out for a very proper ugly sweater Christmas party. Ugly sweaters — albeit, not *that* ugly — from the waist up, proper slacks — pleated, for the prince, skinny black for his bride — and sensible shoes from the waist down. The Markle impersonator is lovingly cradling her baby bump, as one does. Sure, fine, not weird at all.

Markle's impersonator looks ... how to put this gently? Um, sort of like the shell of a human who's been put under some sort of mind-control magic spell. The way she's leaning against that tartan-covered chair, staring off into the distance, clutching the gold present ... Something just ain't right, y'all.

It's made even more so unsettling by the fact that Harry's impersonator is mischievously giggling in a way that implies that he's the one that forced her into the confusing situation to begin with.

The final scene ... honestly, somebody give the Markle lookalike a hand or something, because "Harry" sure isn't going to, if the dastardly look on his face is any indication. Markle's impersonator appears to have just malfunctioned — er, taken a spill — while holding a gift, and Harry's impersonator is straight-up loving it. He's like, "Ah, yes! Mint! She's done exactly as I'd hoped she would! I'm quite chuffed, I am, quite chuffed, indeed."

These wax face mask photos are wild, are they not? Really and truly, they are the wildest. But we're all in this thing together now, so stay strong and sweet dreams.