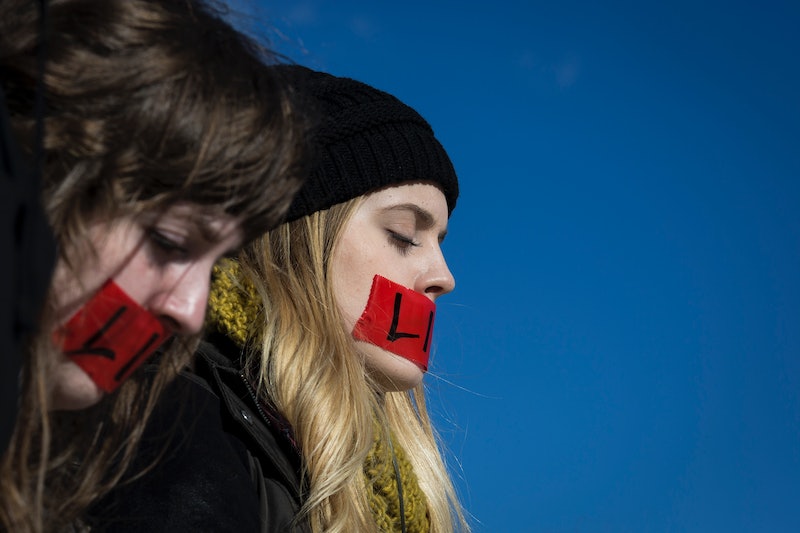 When Dr. Bhavik Kumar goes to the supermarket, he looks down at people’s waists. That’s where a gun would be, he thinks. When he walks to the front door of his office, he considers how he holds his cup of coffee, and whether it will protect him from a bullet. As an abortion provider in Texas, these are just everyday thoughts. He knows they aren’t normal.

Kumar is one of two physicians who perform abortions at the Austin, Texas Whole Woman’s Health center. (He also travels between clinics throughout the state.) The clinic sits just off a noisy major highway in-between the Texas State Rifle Association and KLBJ radio station, known as “The Rock of Austin.” This Austin branch was the first Whole Woman’s Health clinic to open in the U.S.

Two years after its 2016 victory in Whole Woman’s Health v. Hellerstedt, the clinic's founder, Amy Hagstrom Miller, and reproductive rights advocates across the country are turning their attention back to the Supreme Court for another landmark case, this time involving crisis pregnancy centers. Women's reproductive health in America is once again at stake.

What Came After The Last Abortion Fight

While the clinic is now open, this Austin branch was closed from July 2014 until April 2017, thanks to the restrictions mandated by HB2, a 2013 Texas law that caused half the state's clinics to shut down. When parts of HB2 were struck down by the Supreme Court in 2016, it was the first clinic to reopen in the state.

A woman seeking an abortion in Texas will faces hard decisions around the cost of travel, accommodation, and childcare, as well as time off work. To help women pay for these costs, private groups and Whole Woman's Health offer some funding — but many women will have to travel to a different state in order to obtain an abortion.

"For a short period of time, when HB2 was in full effect, there were just six clinics open in the state."

She adds: "The stories that are not being told are the ones who can’t make it over those barriers — who are being forced, really, as a byproduct of these laws to carry a pregnancy that they don’t feel ready for or prepared for.”

"Your Number One Concern Is To Leave Not Pregnant"

On a temperate morning in mid-March, a handful of individuals faced the clinic and prayed on the other side of a chain link fence. They are members of 40 Days For Life, an anti-abortion group. They aim to keep a constant prayer vigil from 7 a.m. to 7 p.m. every day for 40 days in March and April.

Inside the clinic, purple blankets are folded on waiting room chairs and quotes from Margaret Cho, Dolores Huerta, and former Texas Gov. Ann Richards line the walls. The clinic’s recovery room is named after Wonder Woman, where the movie Selena plays on regular rotation. Outside, the highway hums, but only if you listen closely.

Considering the daily protests, and the state and federal governments' attempts to chip away at reproductive rights, “the average person doesn’t know or care about restrictions,” says Kumar. That’s because, for patients at the clinic, Hagstrom Miller says, “[your] number one concern is to leave not pregnant anymore.”

If a woman lives outside one of Texas’ major metropolitan cities, she can expect a long drive to get to her appointment. Texas is roughly the same size as France, and rural communities are underserved when it comes to abortion care and healthcare in general, says Emily Martin of NARAL Pro-Choice Texas.

"It’s hard to estimate exactly how many Texans are using the fake women's health centers [another term used by reproductive rights advocates for crisis pregnancy centers] because there are no accountability measures," says Martin. "I wouldn’t want to say that’s where [Texan women] are ending up, but based on calls we receive in our office, there is a lack of knowledge about what the barriers are.”

Restrictions on Medicaid and the stigma around abortion are two of the biggest barriers to care in the state, say Hagstrom Miller and Kumar. And that's before the logistical hurdles.

"Maternal mortality in Texas is as bad or even worse than in some developing countries."

In 2011, Texas passed a bill that requires all women seeking abortions to have two separate visits to a clinic, with 24 hours between visits. Because of that bill, women are forced to have an ultrasound before their procedure. The law mandates that the ultrasound must be performed by the same physician who would then go on to perform the abortion.

During a first appointment and after a sonogram is performed, physicians are required by law to read a script that links abortion to breast cancer (which is a myth). In addition, the state-mandated reproductive health information booklet, Texas Woman’s Right to Know, claims that abortion is also to blame for depression and future substance problems.

Picking Up The Pieces From The Last Round

Texas is widely regarded as one of the worst states in the country for women’s reproductive health, compounded by research suggesting maternal mortality in the state is as bad or even worse than in some developing countries. That’s no accident.

HB2 was “the straw that broke the camel’s back,” she says. That law required clinics' staff to have admitting privileges at nearby hospitals, and the clinics themselves to have facilities comparable to ambulatory surgical centers. Texas clinics that didn’t meet those requirements were forced to close.

For a short period of time, when HB2 was in full effect, there were just six clinics open in the state, down from 70 — all of which were ambulatory surgical centers. Gradually, clinics began reopening after Whole Woman’s Health got an injunction against the ambulatory surgical center requirement. That saw the number of clinics increase to 18, but all still required hospital admitting privileges. In 2016, the Supreme Court found both provisions unconstitutional, and said they place an undue burden on women seeking healthcare.

“We won on paper in the summer of 2016," says Hagstrom Miller. "But rebuilding the fabric of care that existed in the state prior to that, and reopening clinics that had been closed for over three years, is an extremely difficult process."

Now, caregivers and abortion patients are looking to the end of June, when a decision is expected in National Institute of Family and Life Advocates (NIFLA) v. Becerra. The Supreme Court case, heard on March 20, stems from the 2015 Reproductive FACT Act, which requires health centers in California, including faith-based crisis pregnancy centers, to post information about pregnancy-related services, such as contraception, prenatal care and abortion.

Getting Ready For The Upcoming Fight

Crisis pregnancy centers argue that the Reproductive FACT Act violates their First Amendment right to freedom of speech. These centers, which are staunchly anti-abortion and usually affiliated with a Christian organization, say they’re being forced to advertise a procedure they don’t believe in.

Crisis pregnancy centers are not new, and there are now thousands of them across the U.S. (While the exact number is unknown, the NIFLA case states that there are 2,700 centers, while the National Abortion Federation says there are as many as 4,000.) They receive state and federal funding, and counsel women with the goal of preventing them from obtaining an abortion.

In Texas, where there are just 22 clinics providing abortion care for the state’s more than five million women of reproductive age, there are more than 200 crisis pregnancy centers. Of those, 50 receive $9.1 million in annual state funding, according to NARAL Pro-Choice Texas.

Crisis pregnancy centers in Austin did not return Bustle's request for comment. Kristen Waggoner, an attorney at Alliance Defending Freedom, a Christian legal firm that is representing the CPCs, said the centers "are focused on helping women imagine what the choice of life would be like."

"Countless women end up at crisis pregnancy centers by mistake."

“When the government decides what people should and should not say, other freedoms are sure to disappear soon after," Michael Farris, president, CEO and general counsel of Alliance Defending Freedom, said in March. "The government exists to serve its people, and not the other way around."

These centers are savvy. Often staffed by volunteers or people who lack medical licenses, the staff sometimes wear scrubs and lab coats to keep up the veneer of medical professionalism, said Nancy Northup, president and CEO of the Center for Reproductive Rights, during a press call in March. These centers are deft at using the internet, and some have paid to appear in the prime spots on Google. For these reasons, countless women end up at crisis pregnancy centers by mistake. (Google did not respond to Bustle's request for comment.)

One example of the harm caused by crisis pregnancy centers is detailed in an Amicus Brief filed by reproductive rights organizations in February. An ultrasound performed by an unlicensed staff member failed to diagnose an ectopic pregnancy (a pregnancy that develops outside of the womb). Because the patient had to wait until she received proper medical care, the delay meant that the pregnancy ruptured and the woman lost a Fallopian tube.

“If you define it as it is — an unlicensed, un-inspected, faux clinic with non-medical professionals giving medical advice that is often times inaccurate and not comprehensive — it’s inappropriate,” says Dr. Kumar.

“We have a momentum here. We have more people in support of abortion rights in this country than we’ve seen in the last 20 years,”

Today, there’s a sense that the public is wising up to the reality of crisis pregnancy centers. Activists like Emily Gray and Lexie Cooper, both Austin chapter leads at the National Organization for Women, protest outside crisis pregnancy centers in the city, using the opposition’s tactics against them. Younger physicians like Dr. Kumar take on the responsibility of care from aging abortion providers in the U.S. As Kumar navigates his life as a provider, always vigilant and deeply committed to what can often be isolating work, doctors-in-training with groups like Medical Students For Choice are organizing around their right to learn about and be trained in the procedure.

“We have a momentum here. We have more people in support of abortion rights in this country than we’ve seen in the last 20 years,” says Hagstrom Miller. “If that can be the byproduct of this awful administration, to be able to unite us and wake people up, there’s some lemonade to be made from the lemons.”