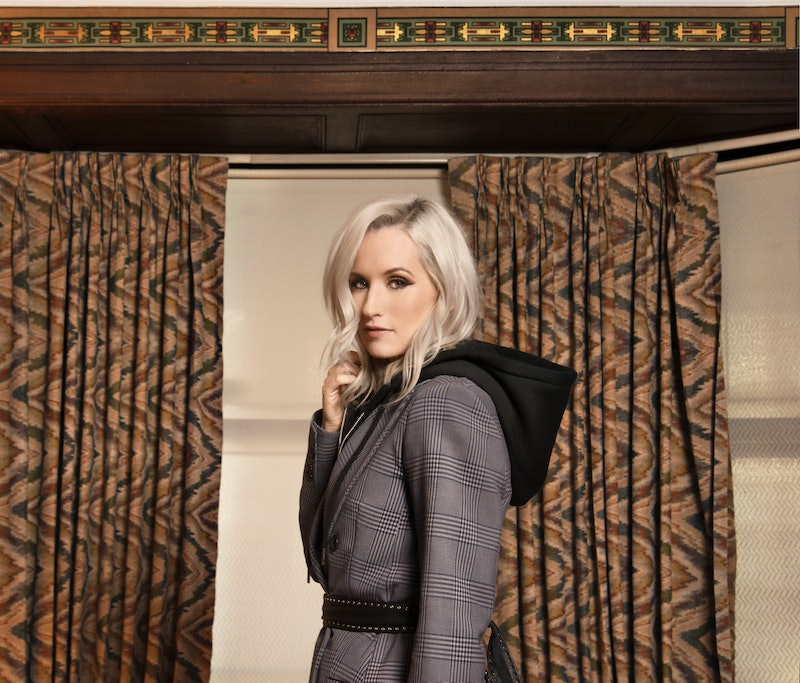 Five years after releasing "Time Machine," Ingrid Michaelson seems to have found one. To create her new Stranger Songs album, Michaelson traveled back to the '80s — but, no, the DeLorean was not the vehicle that transported her there. Instead, the native New Yorker credits the hit Netflix sci-fi series, Stranger Things, for providing all the totally tubular blasts from the past she needed to inspire an entire cassette tape of fresh material.

"I've always had a really soft spot in my heart for anything that's nostalgic because I'm just such a nostalgic person," Michaelson tells Bustle in a phone interview. "And the show itself just brings me back to a different time in my life when I was little, and it just made me feel all these feelings. It's like you're watching The Goonies or E.T. It just feels really real — except for the graphics are way better."

Music lovers who may not have seen Stranger Things won't feel like they're in the dark when they stream the tracks, however. Michaelson, who will kick off The Dramatic Tour in support of the album this fall, says that she didn't "want to alienate anybody" and kept the songs' themes fairly broad and universal. "I chose to write about things that everybody experiences in some way, and everything can be a metaphor if you look at it a certain way," she explains of the project, which she dropped on June 28.

Many of her experiences are infused throughout the record, which she describes as a "good split" between plot points from Stranger Things and her own life: "I feel like if you really just look through the lyrics, then you understand where they came from. ... You start out with your eyes focused on a certain moment, and it kind of just explodes and extrapolates into your own existence, you know?"

To help better spell it all out, Michaelson is taking a break from working on the Broadway adaptation of The Notebook to crack open some of the Stranger Things Easter eggs within Stranger Songs' not-so-coincidental 11 tracks for Bustle.

During a Stranger Things Season 1 post-makeover scene, Mike (Finn Wolfhard) adorably tells Eleven (Millie Bobby Brown) — wearing a pink dress and covering her bald head with a blonde wig — that she looks "pretty... good ... pretty good." That moment got Michaelson thinking: what does pretty really mean? "Of course, in the show, Eleven ends up with the wig off, and the dress is covered up with a blue jacket, and she's covered in dirt, and it's the opposite of what, historically, people have considered feminine. But she's such a badass and she's the strongest character on the show, and so I just thought it would be interesting to play with that descriptor."

After all, Michaelson says she could relate, so the soaring anthem — plus its "fight like a girl" lyrics — were born: "It very much mirrored a lot of things in my own existence, as a woman, and in this world, and in the music industry and how people view you in a certain way. And so it starts as being about Eleven, but then it becomes about me."

To celebrate the song's message, she also enlisted the help of some famous pals — including Meghan Trainor, Evan Rachel Wood, and Hoda Kotb — to create the "Pretty" music video. The clip, which features a fun compilation of home-video-style shots of the women lip-syncing to the track, actually came together in the, well, eleventh hour. "Everybody was really sweet because I was like I need it by tomorrow, and they were all really cool about it," jokes Michaelson.

For Stranger Songs' first single, Michaelson channeled the relationship between Nancy (Natalia Dyer) and Jonathan (Charlie Heaton). "You lay beside me in my bedroom / Never made a move, but I wanted to / You sleep and I stare at the ceiling / Counting my feelins / They were all for you," she sings on the track.

"It's like when Nancy and Jonathan are in her bed together and, you know, that's when their romance is starting to bloom but she's with this other person," she explains of the relatable theme found within the love triangle that also involved Steve (Joe Keery), of course. "It is a specific moment of the show, but it can also be something in your life."

As a Stranger Things superfan, Michaelson has high hopes for several Season 3 storylines — namely, the budding friendship between Eleven and Max (Sadie Sink). But that didn't stop her from basing "Jealous" upon their initial rivalry. (Specifically, it was the Season 2 scene where Eleven uses her powers to toss Max from a skateboard.) She describes "the old Smurfette phenomenon," where a "catfight situation" ensues after a new woman is introduced into an almost-all male group.

Adds Michaelson, "I'm looking forward to seeing the development of that friendship because I think that's a really cool and important relationship."

Eleven and Max's sisterhood isn't the only friendship Michaelson explored on the album. Her track, "Best Friend," takes a cue from a Stranger Things fan theory that Barb (Shannon Purser) may have actually had a romantic interest in Nancy.

"I feel like it's not something that everybody thinks, but it's definitely in the fandom. I thought it was kind of obvious," shares Michaelson. "So I wanted to give Barb a moment to have her feelings actually shared — or at least from my point of view." (#JusticeForBarb)

"Christmas Lights" — the first song Michaelson penned for the album — actually began as a poem. "I love the idea of communicating with somebody who's passed on through Christmas lights," she shares.

One Easter egg fans might not catch right away: The line, "Should I stay? Should I go? / I'm so lost without you," is a nod to The Clash's 1982 classic, "Should I Stay or Should I Go" — a favorite of Will (Noah Schnapp). "Little things like that, people might not really pick up on but they're there," adds Michaelson.

The desperate quest of Joyce (Winona Ryder) to save Will from the Upside Down in Season 1 also partially contributed to the message behind "Mother." Reflecting on the beauty of "the story of a mother who is going to go to the ends of the earth to find and rescue her child," Michaelson also drew inspiration from Eleven's search for her mom in Season 2. She'd also personally experienced the loss of her own mother, artist Elizabeth Egbert, who died in 2014, following a battle with cancer.

"There's a lot of mother energy and so I thought that it would be nice to write a song about that," explains Michaelson. "If I'm being literal, it's kind of Will's point of view, but it's also an amalgamation of Eleven and me and Will."

Overall, the feeling of "kind of being a little bit of an outcast" is one of the Stranger Things themes that most resonated with the singer. That's why she ultimately kicked off the album with "Freak Show," a track that she believes will also speak to many of her fans.

What Michaelson seems to have found with Stranger Songs, though, is a nostalgic album that even a demogorgon could love.

More like this
At 28, Tisha Campbell Was Newly Married & Dancing Through A Career Pivot
By Grace Wehniainen
Gabby & Rachel Reveal How That 'Bachelorette' Rose Ceremony Twist Happened
By Grace Wehniainen
Selena + Chef Season 4 Was Filmed At Hannah Montana's Old Malibu House
By Jake Viswanath
At 14, Melissa Barrera Was Planning Her Quinceañera & Falling In Love With Musical Theater
By Gabrielle Bondi
Get Even More From Bustle — Sign Up For The Newsletter