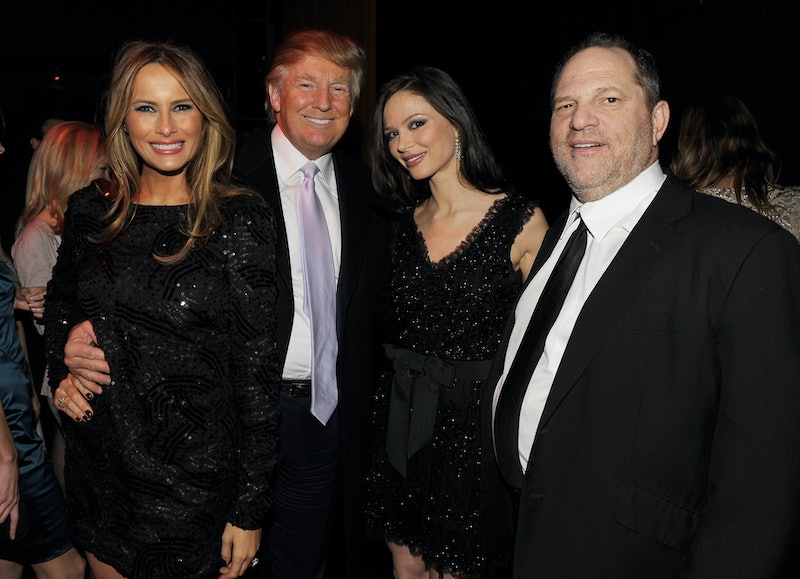 After the New York Times published a scathing report of sexual harassment accusations against film mogul Harvey Weinstein, some Trump admirers have used the report to make a case against liberals who benefitted from Weinstein's Democratic fundraisers. As the allegations against him continue to make waves and gain traction from both liberals and conservatives, one tweet highlights the hypocrisy of Trump fans deriding Weinstein.

Weinstein has maintained that some of the allegations against him are "patently false." And on Tuesday, Sallie Hofmeister, Weinstein's spokesperson, released a statement:

Any allegations of non-consensual sex are unequivocally denied by Mr. Weinstein. Mr. Weinstein has further confirmed that there were never any acts of retaliation against any women for refusing his advances.

Marina Fang, associate politics editor for The Huffington Post, simply shared two quotes: one from Weinstein and one from Trump. During a conversation that reportedly occurred between him and model Ambra Battilana Gutierrez in 2015, a voice supposedly belonging to Weinstein says, "I'm a famous guy." Similarly, during that famous 2005 Access Hollywood segment, Trump tells host Billy Bush, "When you're a star, they let you do it."

Context is key here. Weinstein's supposed line is from an incredibly queasy recorded exchange that reportedly occurred between him and the model, who was 22 at the time. While talking to Gutierrez who can be heard expressing deep discomfort towards being alone with the film producer, Weinstein propositioned her and said, "I’m not gonna do anything. I swear on my children. Please come in. On everything, I’m a famous guy."

Trump's line to Bush is equally disturbing in full context. "You know, I’m automatically attracted to beautiful — I just start kissing them. It’s like a magnet. I just kiss. I don’t even wait. And when you’re a star, they let you do it. You can do anything," Trump said. Here's the full transcript from 2005.

Trump goes on to say, "Grab them by the pussy. You can do anything." Trump apologized for the comments in 2016 but ended his apology by asking for scrutiny against Hillary Clinton.

Fang's tweet that places both quotes together, reveals a fundamental truth. Male figures of prominent status, like Trump and Weinstein, are fully cognizant of the social and financial capital they wield in front of women. They know that they can use this hierarchal position over women, pushing them into situations that psychologically and physically bruise them.

Another thing that Fang's tweet does is show us that a considerable amount of conservative outrage over Weinstein doesn't appear to be out of concern for women's safety or even a sense of commitment to exposing predatory behavior. Some conservatives are focused on Weinstein as the mogul was a major donor for Democrats. Such a status, according to a few, shielded him from criticism. But it seems like a lot of the conservative rebuke is more geared toward scoring points against liberals. For instance, counselor Kellyanne Conway's criticism and Donald Trump Jr.'s rage against Weinstein on Twitter are fine as long as they also criticize Trump for his disturbing comments from 2005. Neither figure has issued similar outrage against the president. And that's how the hypocrisy becomes a little too obvious.

The point of such highlighting sexual harassment shouldn't be about tallying scores between liberals and conservatives, and yelling "Gotcha!" when a member of either political group is exposed for questionable morals. The purpose of such reports should be about improving conditions for women in political and entertainment (and other) places while holding powerful figures accountable. After all, neither side has a monopoly on sexual harassment. Both sides could do better with addressing misogyny.

Thus, Weinstein's termination from The Weinstein Company on Sunday should offer conservatives proof that perhaps some people are actually committed to addressing sexual harassment accusations.

The same conservatives, like Conway or Trump Jr., may not have a satisfactory answer when someone ends up asking, "Now that Weinstein is fired, what do you plan to do about Trump?"