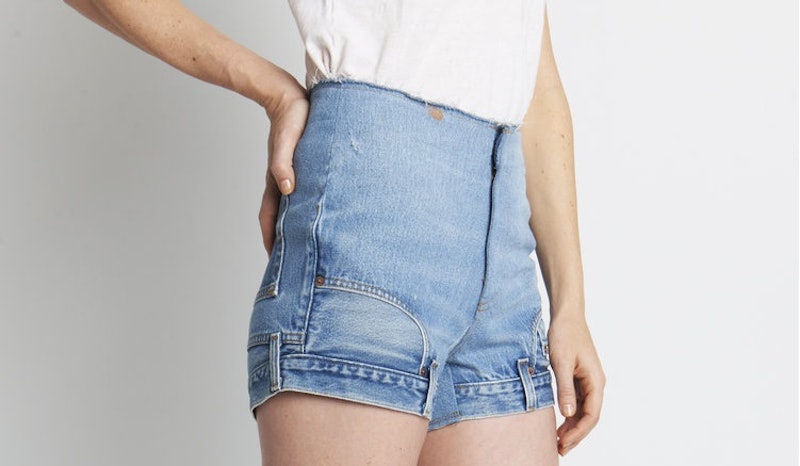 Stranger Things fans, are you ready to head into the Upside Down? Just instead of entering a portal into an alternate universe full of monsters, you will be sliding into a literal pair of upside down jeans. CIE Denim made upside down shorts inspired by the Netflix series, creating a trippy pair of high waist shorts that look like you're wearing the waistband on your cuffs, and your cuffs on your waistband. It's basically the visual representation of Mr. Clarke explaining how one would get to a different dimension if it existed — "purely theoretical, of course."

Taking a paper plate, Mr. Clarke says to imagine a flea on a tightrope — it doesn't just go forward and backward like we do, but can also go over and under. That underside is the shadowy realm of the Upside Down, and the pants seem to mimic that analogy.

CIE Denim is a New York City-based vintage shop that has a tightly curated selection of jeans that aren't your typical skinny fits and boot cuts. Instead, they like to focus on the creative and slightly weird, and their shop currently only has six pieces to choose from. And all of them are inspired by that shadowy underworld that's just on the other side of our existence.

All six jeans are named after characters on the show, and they bring the adventure of the '80s inspired series to your wardrobe. Check them out below.

If you're wondering where Dustin's version is, the brand posted a "Dustin" pant back in the beginning of 2018, where it was a loose fit, dark wash jean. One can assume that they sold out.

While maybe not your most practical pair of jeans — probably even the most relaxed of office work spaces might think wearing a pair of these on a Monday is pushing the boundaries of the dress code — you have to admit they're really creative. And if you're a Stranger Things fan with half a grand burning a hole in your pocket, it's an ingenious way to show that you're a fan of the series. Some people might go the obvious route and wear a graphic tee, but this gives you the option to be a little more subtle!