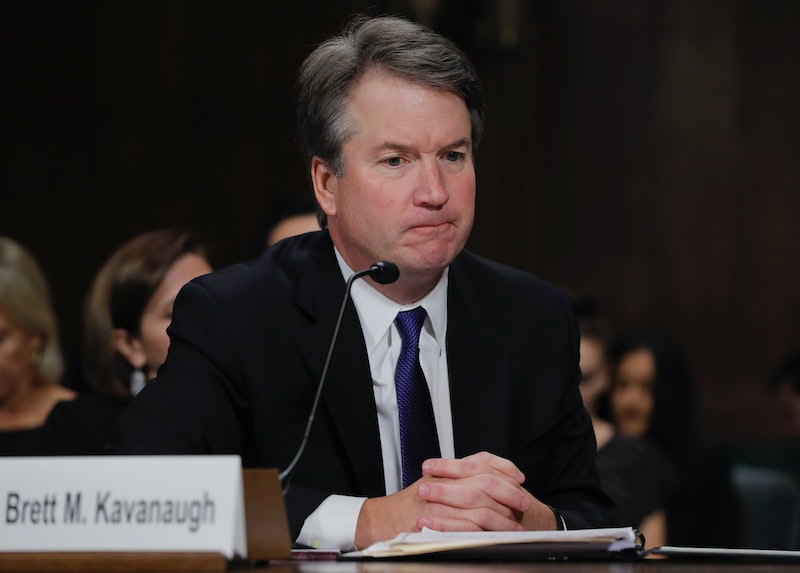 The New York Times has released a letter written by Brett Kavanaugh in 1983, during his time as a Georgetown Prep student. In the letter, which was written in the weeks leading up to "Beach Week" and largely covered the logistics of the trip ahead, Kavanaugh referenced himself as "Bart." He also referred to his group of friends as "loud, obnoxious drunks," as well as "prolific pukers."

In a statement released by his lawyers to The New York Times, Kavanaugh said of the letter, "This is a note I wrote to organize 'Beach Week' in 1983."

In the letter, Kavanaugh writes in part,

If half of Gonzaga/St. John's starts coming, we might have to give the boot or else we might get it ourselves. I think we are unanimous that any girls we can beg to stay there are welcomes with open...Anyways I think we're all set. Remember that the eight of us are in charge- we get beds and we kick people out- no one else. The danger of eviction is great and that would suck because of the money and because this week has big potential (interpret as wish).

Kavanaugh concluded the letter by signing his name with an "FFFFF" signoff, a supposed inside joke between friends that Kavanaugh has maintained has nothing to do with any sexual innuendos. Then Kavanaugh added,

P.S. It would probably be a good idea on Sat. the 18th to warn the neighbors that we're loud, obnoxious drunks with prolific pukers among us. Advise them to go about 30 miles..

The letter is cut off mid-sentence in the image released by The New York Times.

Beach Week has become a central point of speculation during the Kavanaugh hearings, especially in the wake of Julie Swetnick's allegation. In her sworn declaration released by lawyer Michael Avenatti, Swetnick wrote, "I... witnessed efforts by Mark Judge, Brett Kavanaugh, and others to cause girls to become inebriated and disoriented so they could then be ‘gang raped’ in a side room or bedroom by a ‘train’ of boys."

Kavanaugh has categorically denied the claims made by Swetnick, calling it a "farce." He has since released his calendars from his years in high school, during which a week is blocked out for Beach Week each year. What's more, in his high school yearbook page, he cites the "Beach Week Ralph Club," which he explained under oath as a joke about vomiting from drinking.

This latest piece of evidence from Kavanaugh's high school days comes a few days after Chad Ludington, a former friend and Yale classmate of Kavanaugh's, stepped out to accuse Kavanaugh of lying under oath regarding his drinking habits. In a statement to reporters on Sunday, Ludington said, "Brett was a frequent drinker, and a heavy drinker. When Brett got drunk, he was often belligerent and aggressive."

Ludington claims that he is working with the FBI regarding this claim. Kavanaugh has not made any public comments in response to Ludington, but has denied ever acting violently while drinking.