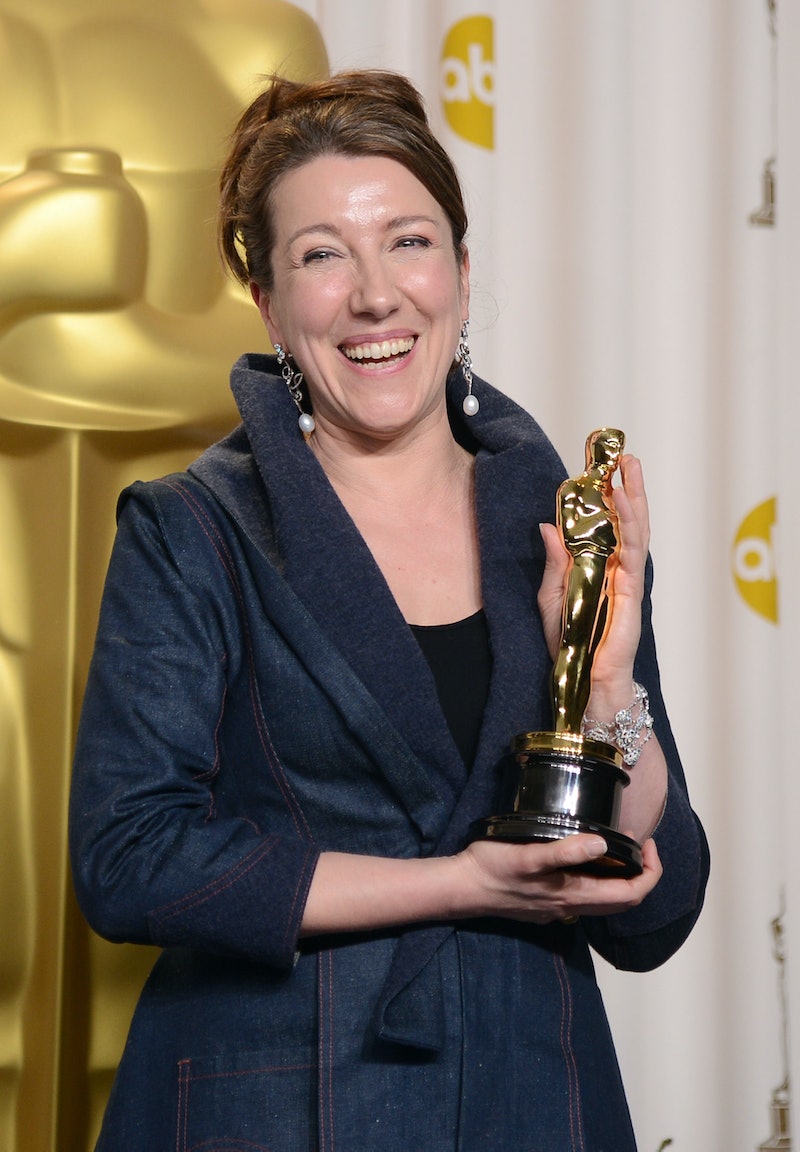 You've probably seen (and quite likely swooned at) Jacqueline Durran's work before. The Oscar-winning costume designer has brought some of cinema's most memorable outfits to the big screen, including the Green Dress from Atonement, the gorgeous Dior New Look twists on Anna Karenina's classic outfits, and most recently, Belle's iconic ballgown from Beauty And The Beast, taken from two dimensions to three. This year, Durran's been nominated for two Best Costume Design Oscars, for Beauty and the Beast and Darkest Hour. But despite Durran being an example of the many talented women who work hard behind the scenes, there are still far too few of them in the director's chair, something that greatly frustrates this designer.

"Maybe we automatically think that directors are men, or cinematographers are men," says Durran, speaking to me over the phone. "And it may be a fact; the truth is even more literal that we automatically think. But I certainly hope that the great female directors and cinematographers are coming up. It’ll mean that we stop the chain of this automatic mindset we have with gender roles."

Filmmaking is still thought of as a male-dominated industry, and the reason why is a vicious cycle; not enough women are encouraged to be or hired as directors, because not enough women are already directors, making those decisions. While Durran says she hasn't experienced any overt gender discrimination on the job, she very much believes it exists. "I think that in your general day-to-day life, you’re treated differently because of your gender. And I’m sure that’s the case on film sets, without a doubt," the designer says.

Perception, she adds, often factors into discrimination. "I don’t think I’ve not got a job because I’m female, because I work in a department where it’s very likely I’d be found in my role," Durran says. "There are definitely departments which have more female people working in them. I’m hoping that it’s changing, but Costume’s one, Makeup’s one, Production Design as well has quite a few female heads of departments. But obviously there’s not so many female directors, not so many directors of photography. I’m starting to meet more women that are following those paths, and I’m hoping it changes."

As for changes in her own work, Durran says she wouldn't mind taking a break from working on the historical worlds she's best known for. "I don’t think I’d like to work on a complete fantasy, but… when you work on a sci fi movie or a movie that takes place in another kind of world, the director always has some kind of core idea that you’ll be relating design to," she explains. "You’re never really working with something that’s never been seen before. You’re always taking elements and manipulating them or changing them or recombining them to create the image for the director’s purpose. That’s one of the things I’d like to do in the next few years."

Durran's two Oscar nominations in 2018 reflect her work balance between reality and fantasy. The romantic fantasy Beauty And The Beast and the historical biopic Darkest Hour, Durran notes, were "so totally different as projects in size and number of costumes that needed to be created. One was totally made up, and one was trying to replicate real life." And yet the two films had something in common, in that they both featured iconic, well-known figures that played outsize roles in peoples' lives. "In some way, in some very deep way, there is actually a similarity, because it’s about how you approach, interpret, and reinvent an iconic figure," explains Durran.

Yet it was just that that made Beauty And The Beast a little more challenging, the designer adds. With Darkest Hour, available now on Digital and Blu-Ray, Durran had plenty of photo documentation and footage of Churchill to work from. But "in the case of Beauty and the Beast you have to reinvent what was there, because it wasn’t a fully fleshed, live, village," she recalls. "You have to add to it and round it, so it becomes something that works in live action."

When you're watching a movie, swept away in the moment, it's easy to forget behind each memorable image is an army of people involved in bringing it to the big screen. But Durran's outstanding costume design is just one of the many examples of women doing amazing behind-the-scenes work in Hollywood.