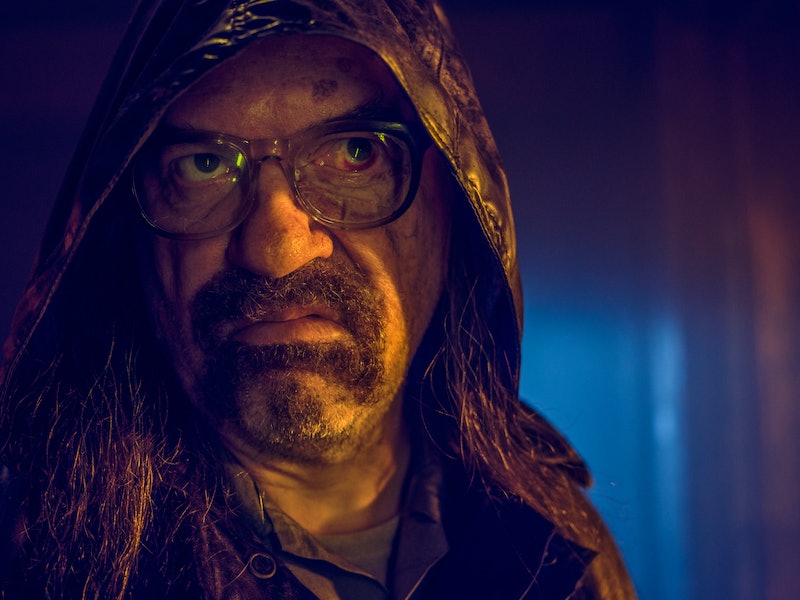 John Carroll Lynch is used to playing the villain on American Horror Story. In Season 4's Freak Show and Season 7's Cult, he played the nightmarish Twisty the Clown, and in Season 5's Hotel, he portrayed real-life serial killer John Wayne Gacy. Unlike in Hotel, his AHS: 1984 character Mr. Jingles isn't based on a real person, but he should feel familiar to fans of '70s and '80s slasher films.

We first learned of Mr. Jingles from Rita (Angelica Ross), who explained in the premiere that janitor Benjamin Richter murdered nine people at Camp Redwood in 1970. Richter fought in Vietnam, but was dishonorably discharged after he started wearing the ears of his victims around his neck. After returning home, he hungered for the violence of warfare and eventually began killing again; he became known as Mr. Jingles because of his large ring key, which jingles before and after he murders his victims.

And that's not the only horror trope AHS coyly utilizes: the white, male serial killer with a tragic backstory is perhaps the most ubiquitous of all horror cliches. Just recall the aforementioned Jason Voorhees from Friday the 13th, who was bullied by the other kids at camp and left to drown in Crystal Lake. And much like with Mr. Jingles, the inciting incident for John Carpenter's Halloween was Michael Myers' escape from the psychiatric ward. Granted, Michael never had a conscience to begin with, but his first victim was his older sister, who was getting it on with her boyfriend, so there are some similarities there, too.

Nightmare on Elm Street's Freddy Krueger also had a sad childhood. Not only did his mother get pregnant with him after being raped, but once he was born, she put him up for adoption. To add insult to injury, he grew up with an abusive stepfather, who he eventually murdered.

AHS fans have yet to learn what made Mr. Jingles the way he is, but if his trajectory is anything like Lynch's Twisty the Clown, it's bound to be a doozy. At least we can sleep easy knowing he's not real; if only the same could be said for the Night Stalker.