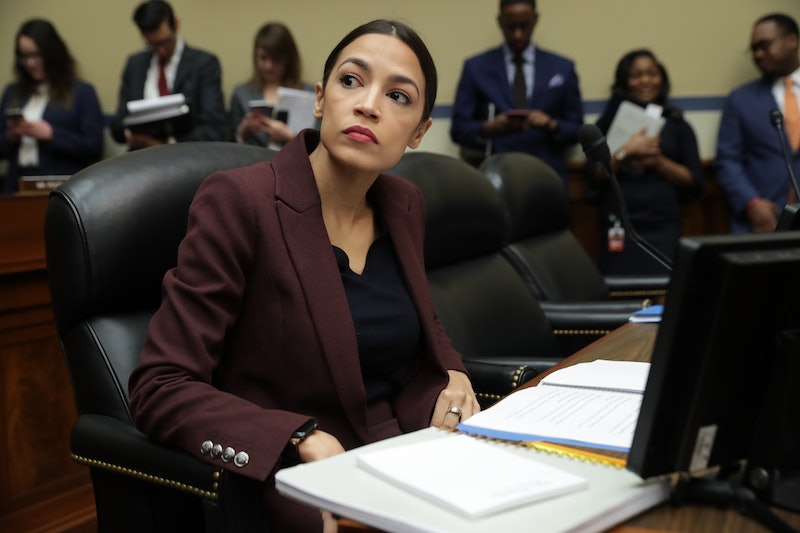 Rep. Alexandria Ocasio-Cortez is not one to bite her tongue. In a Sunday interview with The New Yorker, Democrat from New York spoke frankly about the vitriol she's gotten from some conservatives. And one particular quote from Ocasio-Cortez about "powerful" men in the interview may resonate with women in power everywhere.

New Yorker journalist David Remnick brought up the online criticism against Ocasio-Cortez and read a piece about women in politics from Jezebel's Ashley Reese. "In politics, women are often either characterized as hideous harpies like Hillary Clinton or pretty idiots whose 'craziness' is bound up with their sex appeal," Reese wrote in her article. "To her critics, Ocasio-Cortez is firmly in the pretty idiot category."

Online, Ocasio-Cortez's detractors have constantly tried to criticize the progressive political figure on everything from her policy positions to her appearance and demeanor. One example of this took place in early January, when an anonymous account shared a clip of a younger Ocasio-Cortez dancing to "Lisztomania" by Phoenix.

The caption from the now-deleted account was: "Here is America’s favorite commie know-it-all acting like the clueless nitwit she is." In spite of the derisive caption, the video went viral. Ocasio-Cortez, however, has known to respond with biting tweets of her own to her critics on Twitter.

In February, Ocasio-Cortez brushed off President Trump's attempt to mock her co-sponsored Green New Deal legislation, which would address the issue of climate change as well as economic inequality in America. The Hill reported that Trump called the legislation a "high school term paper that got a low mark."

Undeterred by the president's mockery, Ocasio-Cortez took to Twitter and responded, "Ah yes, a man who can’t even read briefings written in full sentences is providing literary criticism of a House Resolution."

In her interview with The New Yorker, Ocasio-Cortez told Remnick that she thought Trump was perturbed by her political success. "I can see Trump being enormously upset that a 29-year-old Latina, who is the daughter of a domestic worker, is helping to build the case to get his financial records," she told the publication. "I think that adds insult to injury to him."

Calling Trump a "small, mediocre person," Ocasio-Cortez told The New Yorker about the ideals she grew up with in her own home and how attending the State of the Union this year left her "underwhelmed."

The Democrat said that as a first-generation household, her parents sacrificed a lot to provide for her. "To be there on the floor of the House was beyond anything my parents would have ever dreamed of," Ocasio-Cortez told The New Yorker. "But the person behind the podium [Trump] was so unskilled. It was kind of sad."