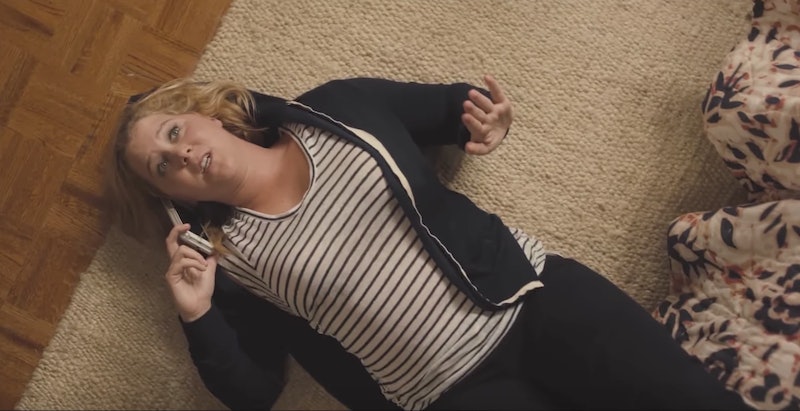 Amy Schumer's humor is often at its best when it consists of her making the audience nod and say "I've been there" (while also snorting water out of their noses from laughing so hard). In her most recent film, Snatched, Schumer teamed up with Goldie Hawn to make the best mother-daughter movie since Freaky Friday — and by the way, a Schumer/Hawn Freaky Friday remake should probably be made soon. Snatched premiered in May, and although it's centered around the characters' mother-daughter trip to South America, it turns out that Schumer's character, Emily, had invited a few other people before her mom. Sorry, moms, it might be hard to hear, but when your daughters are planning wild post-break up trips to foreign countries, you're usually not the go-to choice for travel companions.

In this deleted scene from Snatched, which is out on Digital HD and on DVD Aug. 8, Schumer's character is oh-so relatable when she's scrolling through her contacts to find somebody — anybody— who is down to go with her to South America in the next week. Glass of wine in hand, she slowly regresses into the fetal position with each decline she receives. Sound familiar?

One of her friends explains she can't go because she has a baby to take care of and Schumer is left saying, "No I didn't understand how breastfeeding worked, can you tell me about it but on my machine?" before hanging up. It's equal parts funny and sad, because let's face it, we've all been there. Once you're in your 20s and 30s, finding friends who are willing to partake in the irresponsible shenanigans they might have once agreed to is an unwelcome reminder that everyone around you is growing up and being "real adults."

Even when you're not suggesting some wild spur-of-the-moment excursion, having nobody to join you in executing an awesome idea because they're busy (or just weirded out because you haven't spoken since biology class) is rough. So it's no surprise that at the end of the clip, Schumer makes the call of surrender to order food, accepting her fate of watching Netflix on the couch alone. Been there, girl. Luckily, her character is able to convince her mom to go with her to South America, and thank goodness that happens, because it makes for a very entertaining movie.