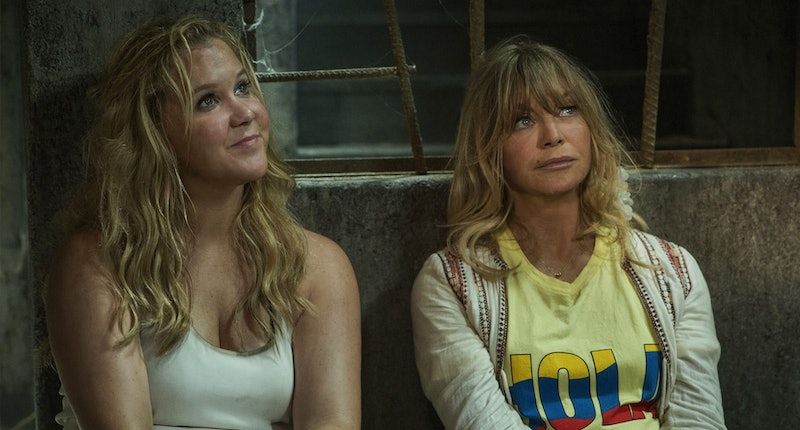 This Mother's Day, Hollywood is giving the mothers of the world the gift of Snatched. The new comedy, about a mother-daughter pair, Emily and Linda, who get kidnapped while on a tropical vacation, hits theaters on Mother's Day weekend, and stars Amy Schumer and Goldie Hawn have been busy promoting the film. Seeing the pair of funny ladies together, it's easy to think that they're really family, but are Amy Schumer and Goldie Hawn related?

They're not actually connected in that way, but that doesn't mean Schumer and Hawn weren't destined to play mother and daughter. And not just because the Snatched stars are both blonde, hilarious, and their chemistry just screams of family, but because Schumer wouldn't do the movie without Hawn. "There's no one better," Schumer said in an interview with The LA Times. Shockingly, however, not everyone saw the duo's comedic chemistry at first. "In the beginning the studio didn't see the two of us together, which I thought was pretty amazing," Hawn told The Sydney Morning Herald. Thankfully, the studio came around to what audiences are finally getting a chance to see: Schumer and Hawn are one of the most well-matched mother-daughter pairs to ever grace the big screen. And that's despite the fact that the two are not related, and had never met prior to starting work on Snatched.

Just because the two aren't family in real life doesn't mean they haven't thought about it, though. "As I look at Amy, and I watch her, she could have been my daughter," Hawn said during an appearance on The Graham Norton Show. "It would have been a troubled daughter. It would have been someone I would have had to deal with," she joked. "I would have loved to come out of you," Schumer responded. In fact, Hawn already has one famous daughter, actor Kate Hudson, as well as two actor sons, Oliver Hudson and Wyatt Russell. But, they seem pretty happy to add a new sister to their clan. Hudson and Schumer recently met up at the Met Gala, where they took a picture for Hawn. Hawn later posted the photo on Instagram using the hashtag "#familyforever."

Hawn has also earned a spot in the Schumer family, particularly in the heart of Schumer's father, Gordon Schumer, a huge Hawn fan. In fact, when Gordon and Hawn first met over FaceTime, he told her she was "the love of my life." Hawn and Schumer might not be blood, but this is one Hollywood family that looks like they're going to stick together, even after the press tour stops. We can only hope that this means we'll get to see more Hawn-Schumer collaborations in the future.