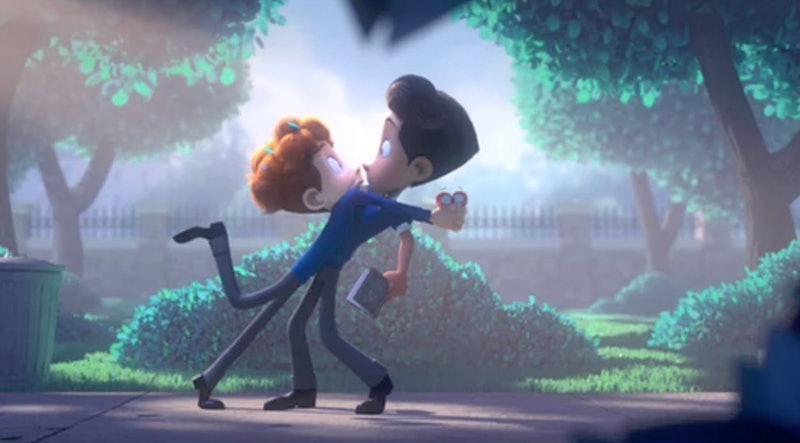 In a Heartbeat Animated Short Film/YouTube

The internet is not always a terrific place. In fact, it is often a terrible place full of trolls and mean-spiritedness and hate. Today, however, the internet is great. It is magnificent. And it’s all thanks to “In a Heartbeat,” an animated short film about two boys falling in love that will make you feel all the feels in the worst way. And by “worst,” I mean “best.”

“In a Heartbeat” was created by Beth David and Esteban Bravo, who, at the time production began on the short, were both senior Computer Animation majors at Ringling College of Art and Design. The short was their thesis project, which they described in a Kickstarter campaign they launched in November of 2016 as “not only a culmination of our four years of education and hard work… but also an expression of a subject that has not been explored in computer animation.” And they’re right; there haven’t been a lot of animated films or TV shows with LGBTQ characters at their centers — they’re often peripheral or secondary characters — let alone with LGBTQ love stories forming the focus. As Damian Alexander, writing for Pacific Standard, noted in December of 2015, it wasn’t until 2013 — just four years ago— that Steven Universe “became the first mainstream American children’s cartoon on a broadcast network to feature a recurring, openly gay character.”

David and Bravo’s Kickstarter campaign was aimed at funding some of the pricier elements of production — namely, the score, which is of the utmost importance in a film with no dialogue. Originally, they’d only intended to raise $3,000 to cover the composer fee ($2,200) and sound designer fee($800); their stretch goal (an additional $2,000, for a total of $5,000) was meant to go towards the cost of a live studio ensemble.

Guess how much they ultimately raised?

$14,191, thanks to 416 backers — almost three times their stretch goal amount. What’s more, they reached their original goal within three hours of launching the campaign.

Consider this proof that anyone who tries to convince you that no one’s interested in watching LGBTQ love stories is wrong.

After the campaign finished in December, they detailed what they planned to do with the funds:

“With the funds we've raised, we are more than well equipped to produce a unique, high quality musical score for the film, and we couldn't have done it without you! Our next steps are to finalize the film with fully rendered animation and high quality music and sound design, begin assembling rewards for the backers of this project, create social media pages for the film as we get closer to the release date, and finally share the final product online for everyone to see!”

And now, the final product is finally here! It starts innocently enough, with our main character observing the object of his affection from afar in the morning before school:

His heart, however, has other plans, and soon literally bursts out of his chest (in a cute way, not a gross one), rushing towards his crush with the aim of bringing the two of them together:

The fella, panicking, runs out to try to retrieve his heart before his crush notices:

He eventually extracts himself, and the crush walks into school — but the heart isn’t giving up yet. Watch the full short here — it’s about four minutes in length and worth every second:

I believe the words I’m looking for are, “I’M NOT CRYING, YOU’RE CRYING.”

The thing is — as is always the case — representation matters. And it matters that kids in particular see characters representative of who they are themselves on their screens — which is why films like “In a Heartbeat” matter.

A study from Common Sense Media released in June of this year examined how gender stereotypes in the media kids consume affects their development and found not only that movies and TV shows meant for kids routinely reinforce the ideas that traits and behaviors our culture codes as “masculine” are more valued than those we code as “feminine,” but also that “boys who consume these media messages are more likely to exhibit masculine behaviors and beliefs.” These beliefs are often examples of toxic masculinity; as the study notes, they often “constrain how boys view gender, steering them away from values such as nurturance and compassion.”

In his 2015 piece for Pacific Standard on Steven Universe, Damian Alexander pointed to more studies that demonstrate how film, television, and other media are failing LGBTQ kids. A 2012 study out of the University of Wisconsin-Madison, for example, found negative stereotypes and prejudice to be “a high contributor to bullying, harassment, depression, and suicide”; and another 2012 study, this one out of Indiana University, observed that more TV time correlating with declining self-esteem levels for all kids who weren’t white boys — possibly as a result of non-white, male kids seeing the negative gender and racial stereotypes rife in the television they watch and basing their self-esteem off of them. “The upshot? When children watch entertainment that tells them that people like themselves are non-heroic, marginal, or villainous, they begin to feel that maybe the TV's right,” wrote Alexander.

It’s true that in an ideal world, this love story wouldn’t be remarkable; it would just be the norm. We’re not there yet — but I have hope that one day, we will be. And as the support for “In a Heartbeat” — as well as the fact that it simply exists — demonstrates, I’m pretty sure we’re capable of getting there. Now we just need to make sure it happens sooner, rather than later.

More like this
Footballer Jake Daniels Shared His Thoughts On A World Cup Boycott
By Sam Ramsden
10 Thanksgiving Alternatives You Can Celebrate This Month
By Katie Mitchell
Iran Has Issued A Death Sentence Over Mahsa Amini Protests
By Catharina Cheung, Darshita Goyal and Maxine Harrison
Wimbledon Alters All-White Kit Rule Amid Candid Period Discussions
By Catharina Cheung and Rachel Mantock
Get Even More From Bustle — Sign Up For The Newsletter