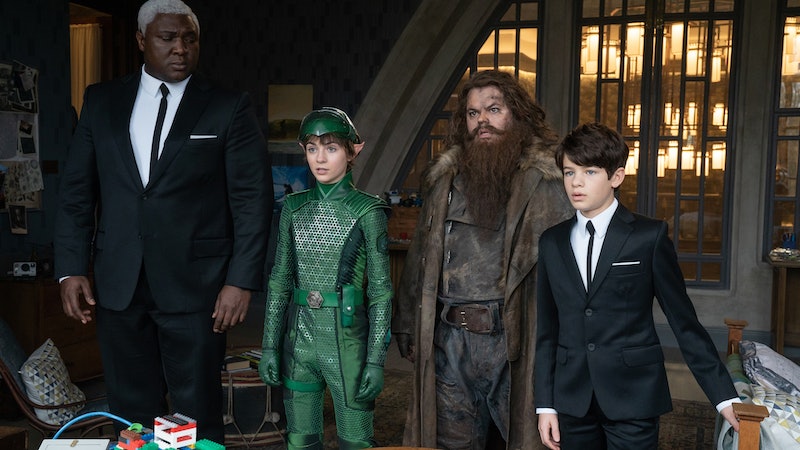 The time has finally come for Artemis Fowl to make its way onto the screen. Disney's adaptation of the 2001 YA novel from Eoin Colfer is hitting Disney+ on June 12, and the newest Artemis Fowl sneak peek shows just how the movie intends to bring the book's sci-fi spy games to life. It also gives fans a close-up look at Ferdia Shaw, who makes his film debut as young Artemis himself.

In the clip, Artemis is looking for his missing father's journal, which he eventually finds after opening a specific sequence of drawers. It's a simple trick, but one that teases the kind of spy games that are in store and shows off a fraction of the detail put in to recreating Fowl Manor, where most of the action in Artemis Fowl takes place.

How does one go about building the house of a famous family of thieves? Well, you don't do it on a sound stage, that's for sure. On a set visit in April of 2018, reporters were taken on a tour of the Fowl Manor, which was built in its entirety and functions almost like a real house — just with better lighting and a lot less plumbing. "When you're sitting in any of those rooms, you really feel as if you're in a house, you're not on a film set," production designer Jim Clay as he explains the team decided to build an entire house, versus sets of individual rooms. "And I think that was a particular advantage to a young cast who have not done a lot of this before."

Shaw is, in fact, brand new to the world of Hollywood — Artemis Fowl is his first and only credit listed on IMDB. But even the most demanding fans of Colfer's book won't be able to deny that Shaw makes a pretty good Artemis. As producer Judy Hofflund tells reporters, Shaw was found in an exhaustive search to find the perfect young actor. "He was chosen as one of [1,200] kids who were auditioned in Ireland," she says, adding, "Our casting team literally auditioned every single boy in Ireland who wanted to audition."

Director Kenneth Branagh adds that, while they did open auditions to kids "absolutely from all over the world," the Irish accent necessitated by the part made it impossible not to cast an Irish actor in the leading role. "A tough one was people from other cultures or background doing an Irish accent," he admitted. But, in the end, Shaw was the best choice. "He just kept getting better, better, better and rising to the top of the list," Hofflund says. "And here he is, this 13 year old boy Artemis Fowl — star of the next Disney franchise."

More like this
Anne Hathaway Shared A "Thrilling" 'Princess Diaries 3' Update
By Darshita Goyal
The 'Scream 6' Trailer Shows Off Hayden Panettiere's Return & Ghostface In NYC
By Jack Irvin and Jake Viswanath
'Friends' Star Maggie Wheeler Offers Support To Matthew Perry After Reading His Memoir
By Alyssa Lapid
Hilary Duff Is “Optimistic” About A 'Lizzie McGuire' Reboot
By Alyssa Lapid
Get Even More From Bustle — Sign Up For The Newsletter
From hair trends to relationship advice, our daily newsletter has everything you need to sound like a person who’s on TikTok, even if you aren’t.