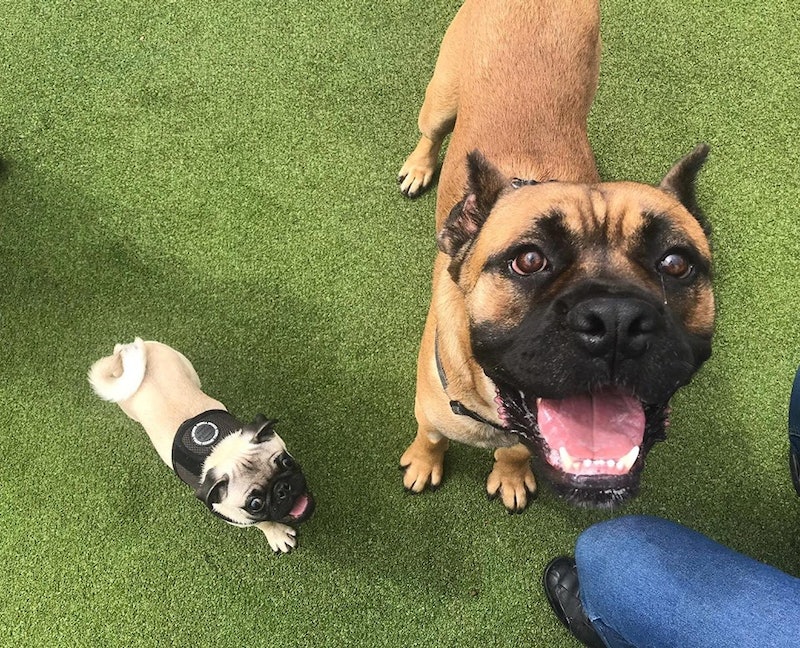 London's famous Battersea Dogs & Cats Home has been looking after animals since 1806. That's over 200 years. And, with that much experience, they are the people to go to if you're looking to find out new and innovative ways to care for creatures that have faced mistreatment. Breathe, guys. This is going to be emotional. But I promise it comes with a very happy ending. Because I've just been informed that one Battersea dog has found own emotional support Pug called Pancake who has helped him with his confidence and bravery.

Pause for overwhelming but beautiful feelings of joy.

Fraser, a resident of Battersea Dogs & Cats home, is a large one-year-old dog who has been through a whole lot in his little life. According to a statement sent through from Battersea, his ears have been cropped and his tail has been docked. Both procedures are illegal in the UK as they are utterly unnecessary.

Some might look at Fraser and think of him as an intimidating dog but, as can often happen, looks are entirely deceiving. Owing perhaps to his experiences thus far, the good boy was actually scared as opposed to scary when he arrived at Battersea. So much so that the wonderful staff and volunteers at his shelter couldn't even persuade him out of his kennel for walkies. And, as we know, all dogs love walkies.

The kind folks at Battersea put their heads together and powowed about the best course of action to ensure that Fraser gained the confidence to leave his kennel. To have the happy pooch life he deserves. This is where Pancake comes in.

Pancake is a tiny, adorable, six-month-old Pug who had been adopted from the dog's home by one of the charity's expert canine behaviourists. Elizabeth Kidd, Pancake's mum, and the staff thought that maybe getting the help of another more confident dog might help Fraser grow in confidence. Yes guys, a sassy little Pug coming through to help emotionally support a big boy. Is there anything more pure in this world?

Speaking about the unlikely match, that's clearly made in heaven, Kidd explained that Pancake helped Fraser become his best self. In a statement sent to Bustle UK, Kidd said:

"Although Pancake and Fraser didn't appear to be the most likely pairing, it was heart-warming to see how well they got along. Little Pancake really taught Fraser how to be a brave dog and be more confident in himself. Fraser really thrived in his friendship with Pancake; helping him to come out of his shell."

Since the pairing, Fraser has become confident not only in leaving his kennel but in making loads of dog mates and playing with them all. Happy as a clam and confident as a contestant on The Apprentice.

So, is this something that is often used in order to help dogs live their best lives? A sort of doggy life coaching from another dog? Do they use Pug hype men on the regular? Well, seemingly, it's actually a thing. As Kidd explains:

"Some nervous dogs in a kennel environment may find a friend beneficial. Where appropriate we pair less confident dogs up with those who are more resilient and cope well with new environments, like our kennels. Alongside other tailored behavioural and training support this can be an additional way to help them feel comfortable whilst with us."

And all of this has led to not only a happier dog, but one who is ready for and in need of a loving, caring, kind family. If you think you could give Fraser the home he truly deserves, please visit the Battersea website.

This article was originally published on Aug. 14, 2019