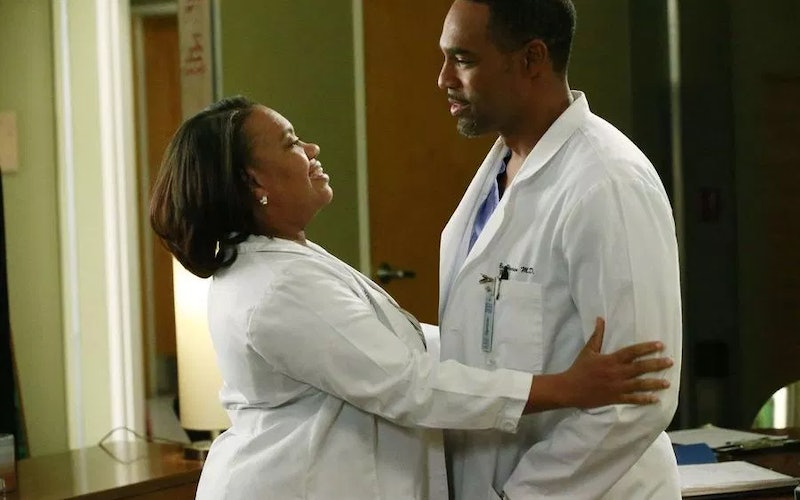 Season 15 of ABC's long-running medical procedure may have been billed as the "season of love" — but for fans of Miranda Bailey and Ben Warren, that moniker has been a bit of a misnomer. A timeline of the Bailey and Ben relationship on Grey's Anatomy shows that the couple has been heading for a major reckoning for a while now. But it's especially hard to watch the fan-favorite couple go through such a tough time while so many of Grey Sloan's other doctors are finding love and coupling up.

Promos for the season's twelfth episode, "Girlfriend In A Coma," position it as the Meredith/DeLuca/Link love triangle hour. But the episode's official synopsis reveals that the upcoming installment could bring some major developments for the former Chief of Surgery and her firefighter husband. "The strain on Bailey and Ben's marriage comes to a head," the press release teases ominously.

Is this the end for the long-running couple? If so, how did they arrive at this point after all this time? A quick look back at the history of their relationship reveals that, while there's undoubtedly a lot of love between the couple, it hasn't always been smooth sailing. In fact, their relationship has been rocked by trauma so often that it's something of a miracle they've even made it this far.

Did Cupid's arrow fly the instant that the Seattle Grace surgeon and the Mercy West anesthesiologist met? Not quite. Their first surgery together was a nightmare when the patient woke up on the table. Bailey chewed Ben out, but it turned out to not be his fault: the patient had a bizarre condition that caused her to metabolize the anesthesia too quickly.

After their first fraught encounter, Bailey and Ben did grow closer and start dating — but that all ended when a shooter ended the lives of many of Bailey's colleagues, including Charles, who died in her arms. Ben missed the shooting, having been out golfing that day. Bailey broke up with him in the Season 7 premiere, so broken by the experience that she couldn't imagine dating anyone who wasn't as broken as she was.

While Bailey had a dalliance with handsome nurse Eli throughout Season 7, that wasn't a lasting relationship. When Ben came back on the scene in Season 8, Bailey quickly found herself falling for him again. He confessed that he had been waiting for her to be ready, and although she insisted she didn't break up with Eli for him, things quickly rekindled between them.

After dating for most of the season, Ben got inexplicably upset when Bailey got pulled into an emergency surgery and couldn't finish the morning crossword puzzle with him. That's because he'd had the puzzle designed with a very special clue: "My question to you." The answer? "Will you marry me." Just when Bailey was on the verge of saying yes, Ben also announced that he had been accepted into a surgical residence at UCLA.

Although they were continuing their relationship long-distance while Ben was studying in California, Ben and Bailey didn't want to put off getting married. The ceremony was almost derailed when Adele was admitted to the hospital and Bailey had to operate. But the couple did get to tie the knot — and jump the broom — while Adele quietly passed away from a heart attack post-surgery.

After Bailey developed OCD late in Season 9 — after accidentally infecting three patients with MRSA, leading to their deaths — Ben came running home to keep his wife company. Not wanting to be apart from his family anymore, Ben quit the program at UCLA. Rather than being pleased by this, however, Bailey was resentful that her husband was a quitter.

Thankfully, Ben was able to become an intern at Grey Sloan and continue his surgical education. However, that progress came to a screeching halt when Ben performed an emergency surgery on a psych patient using the sharp edge of a clipboard. Unable to endorse her husband's actions, Bailey had no choice but to suspend Ben — and essentially suspended their own relationship in the process.

In the Season 13 finale, the hospital caught fire after an explosion and — after assisting the first responders in rescuing patients from the flames — Ben found yet another new passion. And so his career path zagged again, from anesthesia to surgery, and now from surgery to firefighting.

Ben tried hiding his new passion from Bailey as long as he could, but eventually he had to tell his wife the truth. Both enraged by her husband's "commitment issues" and scared for his life, Bailey didn't take it well and told Ben he could drive himself home in the firetruck.

So stressed by her husband's new occupation, it wasn't long before that tension took its toll on Bailey's body. The Chief had a heart attack, but her life was saved thanks to Maggie's intervention. While this health scare led to a reconciliation between the couple, that reprieve was short-lived.

Although Bailey went on sabbatical from her position as Chief in order to alleviate herself of stress, that didn't lift the greatest source of stress in her life: her fear over the well-being of her husband. Although the couple officially decided to undertake a trail separation in a crossover episode of the spinoff Station 19, Grey's viewers didn't find out until the mid-season finale of that show, "Blowin' In The Wind."

Will Ben and Bailey survive their separation? Or are they headed for divorce like so many long-term Grey's couples before them? If there's one silver-lining of all the hard times they've been through, it's that Miranda Bailey and Benjamin Warren have proven they can weather many a storm. Surely they can ride out one more.