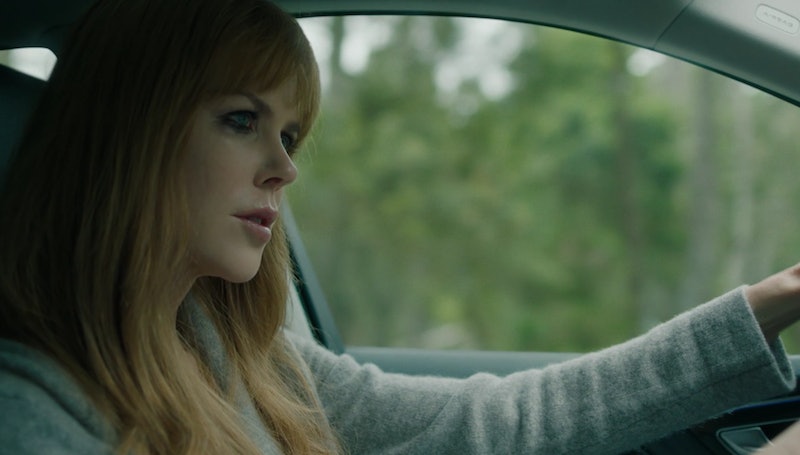 Spoilers ahead for Big Little Lies Season 2, Episode 2. In the aftermath of Perry’s death, the effects of his abusive behavior still lingers ⁠— and this Big Little Lies theory about Celeste has fans very concerned. "Tell-Tale Hearts," the second episode of Season 2 that aired on Sunday, June 16, opened with Celeste (Nicole Kidman) driving her car in a distracted daze before she veers off the road. Later, when Madeline (Reese Witherspoon) gives her a ride home after the accident, Celeste explains that she took an Ambien the night prior and had no recollection of even getting into her car in the first place. As viewers will recall, Celeste is confronted with some interesting sex flashbacks right before she loses control of her vehicle. While these visions could initially be construed as Perry flashbacks, one Reddit user is offering another premise that puts the lasting tolls of abuse in perspective.

Following Sunday's episode, Reddit user fingertoes135 posited in a discussion thread that Celeste may be resorting back to old ways in an effort to cope with Perry's death. The user wrote, "[Is] Celeste having … sex with strangers now? While driving before her accident she had a flashback to having sex with a man with an awful back tattoo and then she was in the kitchen rubbing a bruise on her wrist. Thinking she lied about taking a pill and is out trying to recreate the ‘love’ between her and Perry."

Following the initial vision, Celeste experiences another flashback after her airbag deploys. In it, she's having sex in what appears to be a car (her car?) with an unidentified man with a large back tattoo. Later, Celeste exposes a bruised wrist while she's preparing sandwiches for her sons. Now, fans are suggesting that Celeste may be engaging in aggressive sexual trysts in an effort to hold on to what she had with Perry. (Side note: the theory also references Celeste's heavy eye makeup, a departure from her usual neutral look throughout the first season). If this particular subplot is, in fact, true, it would be a powerful one, as it dissects the complicated, nuanced tolls of abuse not often explored on TV.

As the National Domestic Violence Hotline reports, it's customary for victims of abuse to want to revisit better times. It's also not uncommon for victims to continue to miss and love their abusers in the aftermath of relationships that have come to a close.

During the episode, these complicated emotions are explored in a poignant way. In the episode, Celeste confesses to her therapist that she still very much misses and loves Perry. During their session, it's made abundantly clear that Celeste also still contends with self-blame for the actions of her husband. This emboldens her therapist to instruct her to put a close friend, Madeline, in her own shoes as a victim of abuse in a powerful scene that leaves Celeste reeling in anger and tears. So, if this Celeste theory is, in fact, true, it certainly offers an unflinching perspective on the complicated effects of abuse endured by survivors.