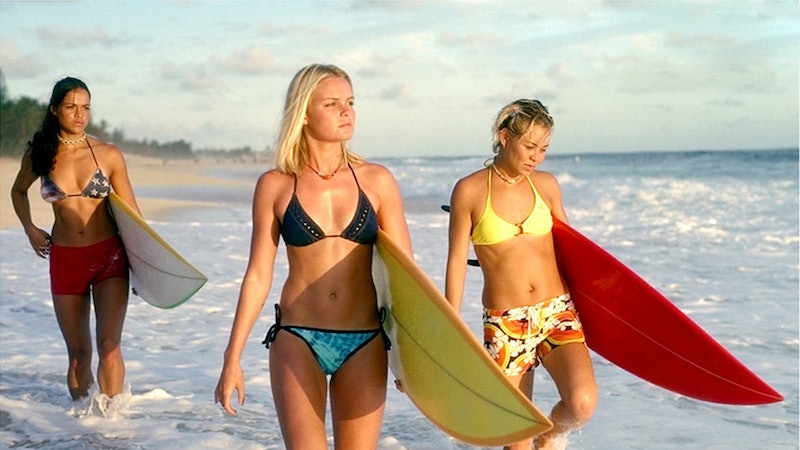 Released in 2002, Blue Crush was one of those VHS tapes that I absolutely wore out in high school. Even though I am not at all aquatically inclined, I imagined myself as a surfer girl, ripping waves with Kate Bosworth (this movie was our introduction to this actress-cum-fashion icon, also) and generally having a grand old time. For those of you who haven’t seen the flick, (where were you in 2002?!) I’ll break it down for you. Ann Marie Chadwick is a badass surfer gal who is scarred from competing because she almost drowned once. Her friends are helping her train to get back on top and get a sponsorship and be a badass famous surfer gal, but in the process Ann Marie meets Matt the Quarterback (not his real name but what I’m calling him), an NFL player with a heart of gold. Will she choose love or will she choose glory?

Now that I’m a lot older and just a tad wiser, I know a few things about what my life in Hawaii would be like: sunburns, jellyfish stings, and a belly full of water — and probably some seriously frizzy hair due to the humidity. But that doesn’t mean that I can’t revisit Blue Crush to relive my imagined glory days. Here’s what I noticed when I watched the movie as a grown up.

1. Penny Is Way Too Young To Be Partying

Penny, Ann Marie’s little sister, is a little bit of a bad egg. What is she? Like 14? How old is Ann Marie? 20? It can’t be that big a difference between them. In one scene, Ann Marie figures out that her cornrowed sister is out drinking and smoking weed with the island burnouts (who are, natch, much older than she is), and Ann Marie goes to the party to get her. I am clutching my pearls at how creepy it is that all of these older dudes want to hang with a 14 year old. This could get dark, fast.

2. People Are Gross In Hotel Rooms

Puke everywhere. Poop overflowing the toilet bowls. Used condoms in the sheets. That’s what Ann Marie and her friends (who are hotel maids) find when they go to clean one of the rooms of the NFL players staying in town for the Pro Bowl. I realize this is a fictional tale, but I can only imagine that actually does happen in real life. Clean up after yourselves, people! I know maids clean your room in a hotel but they do not need to touch your party puke.

Bosworth has heterochromia iridium, which means that her eyes are different colors: One is bluish, and the other is hazelish. It’s the first shot of the movie, give or take, and it’s still awesome. It’s perfect for people who can’t make decisions: Blue eyes? Brown eyes? Why not both?

Between Legally Blonde, Blue Crush, Pearl Harbor, and a few other films, Matthew Davis, who plays Matt the Quarterback, filled what was apparently a very big niche in early aughts films: The hot guy. Though his douchiness varied from movie to movie, this was his wheelhouse. Today, he’s on The Vampire Diaries, so it’s good that he switched it up.

After she spends the night with Matt the Quarterback, Ann Marie fights her conscience and then decides to order room service for breakfast. Her choice? Blueberry waffles? And she’s so excited about it, as is her pal Lena. Could these ladies love waffles more than Leslie?

Obviously I’ve already told you that I’m not a surfer, but that water is just too terrifying to even think about going into. When Ann Marie is getting the beach report, she hears that the waves are double overhead, which means that they are double the height of an average person. Um, no. I’ll stick to the kiddie pool, thanks.

7. There Is An Obvious Body Double During The Chin Up Scene

Kate Bosworth did learn to surf for this movie, and she was pretty muscular, so I’m surprised that she could not do a chin up. Not that I can do a chin up (not hating), but the body double they used is so obvious. Does not even look like her.

8. Football Player Leslie Is The Manager From Elf

Matt the Quarterback’s teammate, Leslie — the one who wears “nut huggers,” as Penny calls them — is played by actor Faizon Love. Love also starred in the role of the mean store manager in the best Christmas movie ever, Elf. Santa’s got a brand new bag.

Anyone else inspired by Blue Crush to try out surfing? I think I’ll just stick to staring at my tropical screensaver.