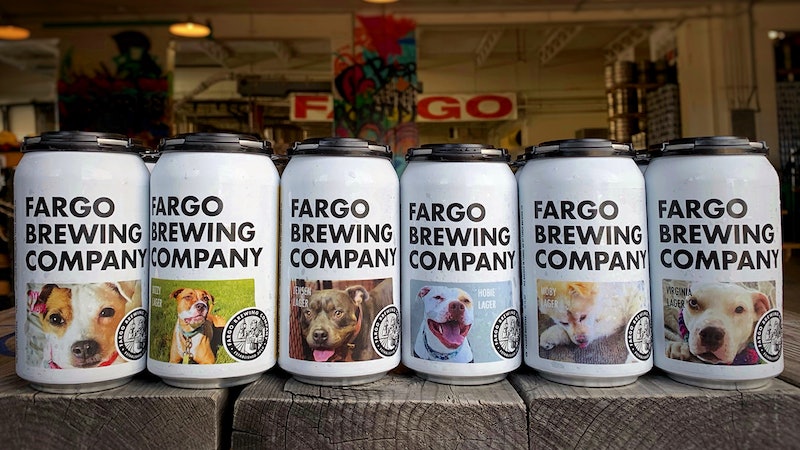 If you love beer, dogs, or any combination of the two, this is just the news you need today: a brewery launched a six-pack of limited-edition beer cans featuring the faces of adoptable dogs. North Dakota’s Fargo Brewing Company swapped out their standard beer labels for cans that featured photos of pups looking for a good home. Dogs! Beer! Dogs on beer! What a time to be alive!

The six dogs featured on the cans are from Fargo’s 4 Luv of Dog Rescue animal shelter. Their names are Nyx, Bizzy, Jensen, Hobie, Moby, and Virginia, and all except one are dubbed “one-der dogs” (pronounced “wonder dogs”) they as will do best in homes without children or other pets. The idea to bring the dog’s faces together with beer came from Jerad Ryan, a volunteer for 4 Luv of Dog Rescue. “The harder to adopt dogs, sometimes labeled as ‘One-der dogs’, have always had a special place in my heart,” Ryan said in an emailed statement. Ryan talked about spending extra time with these dogs at the shelter, eventually fostering a “one-der dog” named Bizzy. While trying to of ways to get more people interested in adopted dogs like Bizza, Ryan came up with the idea to feature dogs on the beer can labels from a local brewery.

In an event held Monday, Nov. 4, members of the Fargo community were invited to come to Fargo Brewing Company, sip some beer, and meet one of the six dogs available for adoption. Even if they couldn’t adopt one of the dogs, they could support the shelter by buying a six-pack of the Fargo Original Larger with the dogs’ smiling mugs, the profits of which went to support the shelter. While a limited number of cans are still available at the brewery, Fargo Brewing Company told Bustle those cans are only available at their location and unavailable to ship. So, unless you’re in Fargo, you’ll just have to settle for staring at the dog photos from afar.

“Dogs are a vital part of all our lives here at Fargo Brewing,” Zach Click, Operations Manager at Fargo Brewing, said in an emailed statement, “and we really like supporting and collaborating with a great organization like 4 Luv of Dog Rescue to ensure that dogs are receiving the love and care they deserve.”

Dog-friendly bars aren’t particularly new. However, one bar took it to the next level as. Last year, the Takeout shared good and adorable news of a Portland, Oregon-based craft beer bar with dogs you could adopt. The bar includes 40 different taps with beer, cider, and wine as well as a “day room” where you can play with dogs, sponsored by Oregon Friends Of Shelter Animals.

If you haven’t had your fix of dog-food news, you can feast your eyes on these extremely adorable, adoptable puppies named after Taco Bell menu items. You think a puppy can’t get any cuter and then you see a puppy named Fiesta Potatoes. If you’re looking for your puppies inspired by or named after food in your area, check out your local shelter. You will be amazed at the minds of some people, their ability to see a dog and go, “yep, this is the name you need.” The Kansas City Pet Project has a year-old lab named Pretzel Jack. The San Francisco SPCA has a chihuahua mix named Pumpkin Boy. The Wisconsin Humane Society has a two-month-old puppy named Science, which is not food-related but is also extremely important. It’s also a reminder that you can adopt a dog and name it literally anything you want. (If you’re stuck, may I suggest Pumpkin Boy or Science?)

More like this
Trust Me, Pickle Martinis Are The New It Drink Of The Season
By Emma Carey
Dunkin’s Pumpkin Spice Latte Is Officially Back This Week
By Mia Mercado
Lotus Biscoff Does A Biscuit-Chocolate Hybrid Now
By El Hunt
I Tried The $20 TikTok Viral Oishii Strawberries — Here's What I Thought
By Sophie Hanson
Get Even More From Bustle — Sign Up For The Newsletter