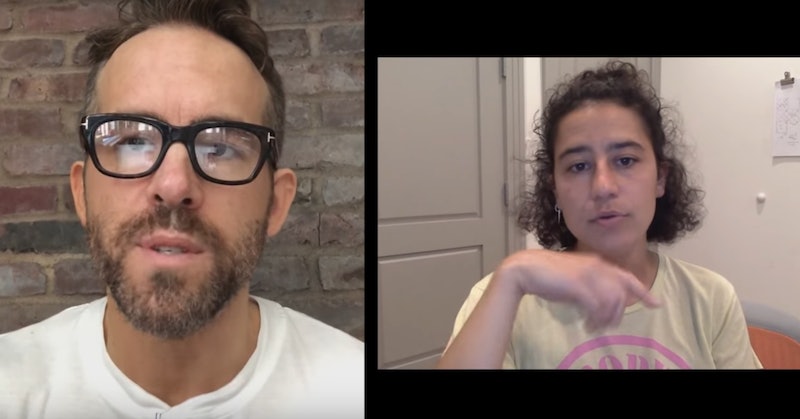 Tons — seriously, tons — of Hollywood's most famous faces are speaking out against the Trump administration's actions at the border, and the video is incredibly powerful. On July 8, stars like Chadwick Boseman, Amy Schumer, Riz Ahmed, Aubrey Plaza, Maggie and Jake Gyllenhaal, and Ryan Reynolds teamed up with the ACLU for a video where they read a statement from an immigrant named Mirian. According to the video, Mirian was separated from her 18-month-old baby while attempting to cross the border, and the celebrities' campaign is an emotional plea for action.

The statement begins, "I, Mirian, make the following declaration based on my personal knowledge, and declare under the penalty of perjury the following is true and correct." Her story is then read aloud for the duration of the video by multiple voices:

The statement (which you can watch in full in the video above) then goes on to recount how once Mirian and her son crossed the international bridge in Brownsville, Texas, she told the immigration officers that they intended to seek asylum. She gave the officers a statement about why they needed asylum, and was forced to place her son in a government vehicle shortly thereafter.

As recent news has reported, Mirian — as well as other adults attempting to cross into the U.S. — was taken to one detention center, while her son — in addition to all other underage children of immigrants — was taken and held in a separate facility. According to Mirian's statement, when she asked why she and her son were being separated, "they did not provide any reason. I had no idea I would be separated from my child for seeking help," she said.

Mirian then recounted how she was advised by another detainee to fill out a form to request information pertaining to her son's whereabouts. She spoke to a caseworker several times, who told her that her son, "has asked for me, and cried all the time during the first few days after we were separated."

Finally, several months later, Mirian was alerted that she will be able to plead her asylum case in immigration court. The outcome of her trial is currently unknown — as is the knowledge about whether or not they have since been reunited. The whole thing is incredibly sad, made even more so knowing that, as per E! News, Mirian's son had to spend his second birthday alone in the children's detention center.

E! News also reported that the video was a collaboration between Maggie Gyllenhaal and attorney Lee Gelernt — who is also the deputy director of the ACLU's Immigrants' Rights Project — but she, as well as the countless celebrities in the four-minute clip, aren't the only famous faces who have spoken out about the families being separated at the border.

On June 30, Chrissy Teigen and husband John Legend attended the "Families Belong Together" march in Los Angeles, California, where Legend performed a heart-breaking rendition of his song, "Preach," and Teigen gave a powerful speech while cradling her newborn Miles in her arms.

The outpouring of celebrity support has undoubtedly rallied due attention to the issue, but Trump has yet to address how or when families that were separated due to his original "zero tolerance" policy (which has since been overturned via an executive order, but does not immediately fix the problem at hand) will be reunited, or if families trying to cross into the U.S. will continue to be separated in the meantime.

To date, more than 2,300 children have been removed from the care of their families while attempting to enter into the United States, according to the ACLU. If you'd like to read more about the immigrant family separation crisis and how you can help, you can click on this link to the ACLU's website.