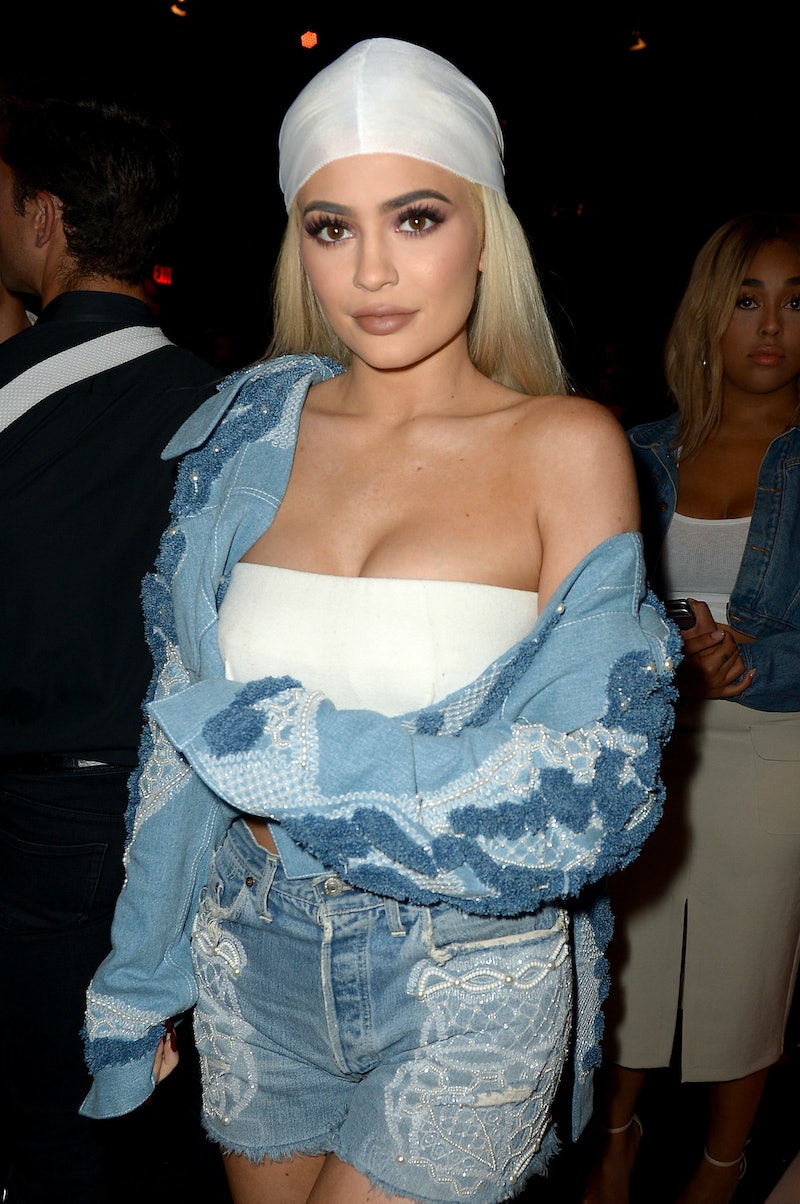 We need to give Kylie Jenner props, because she is way sneakier than any of us ever realized. For months now, we've been drudging through speculation over Jenner's rumored pregnancy — and honestly, it's been exhausting. Well, the truth has finally been revealed: Kylie Jenner named her baby Stormi. Wait, what?! If you're like me, you've taken a magnifying glass to every single post, connecting the smallest hints wildly like a pseudo-detective, trying to make sense of this super-secretive pregnancy, and you still probably didn't see this name coming.

Now, I know what you're thinking. We've been seeing non-stop butterfly themes from Jenner. Jenner and boyfriend Travis Scott got matching butterfly tattoos, she wore glittery butterfly rings in an Instagram post — heck, Scott wrote a freaking song called "Butterfly Effect." Naturally, all these hints have left Twitter fluttering with theories she'd name the baby Butterfly (or Butterfli, I guess...). Frankly, I refuse to believe that these were all just coincidences. No. This is some deep strategic-thinking at work.

So, here’s my hot take: Have you heard of the butterfly effect? No, not Scott’s song and not that creepy-looking Ashton Kutcher movie. The butterfly effect, part of chaos theory, is a concept that centers on the idea that one small change can result in a much larger outcome. One way this theory is often presented is in the idea that a butterfly flapping its wings could cause a hurricane halfway around the world. Are you tracking with me, folks? A butterfly's wings can cause — say it with me now — a STORM.

So, it's not that the fandom was wrong, per se. We were just being basic AF, taking these hints at face value, and not considering that there might be an alternative name hidden in plain sight. Honestly, I'm ashamed that I wasn't thinking outside of the box.

Of course, Jenner is still merely emerging from her brief stint out of the spotlight, and it could take time before we hear a full explanation of the name from the new mom and dad, after all, they're probably still adjusting to their new lives as happy parents.

That being said, this theory totally holds up — and it could be a clue of much bigger changes happening in Jenner's life. So, what is the butterfly effect for Jenner and Scott? This name, without question, alludes to monumental changes. Of course, having a baby would change anybody's life drastically — especially since this is their first child. I'm not ready to draw the line there, though. We need to think bigger.

After all, Jenner once told Elle U.K.,

"I would love to have a family and build a home with a farm in Malibu Canyon and just have my kids and throw away my phone, and just really, like, live my life and not do this anymore."

Hear me out, in light of these hints, is it possible that Jenner is trying to tell us something much, much bigger? Given Jenner's desire for more privacy, tiny baby Stormi could be Jenner's "butterfly-effect-opportunity" to step away from her mega role as an influencer and beauty mogul. It's definitely possible, and feeling more and more likely as I stew on it.

Still not sold? Don't forget, she is building that ridiculously giant mansion on seven acres of land. If you ask me, that sounds like a pretty nice place to start a little farm. Am I right, or am I right?

So, is Jenner trading in her lip kits for mommy blogs and farming equipment? We'll have to wait and see. Look, it's just a theory, but I think it's safe to assume we'll see some storm-sized changes coming to Kylie Jenner's life sooner than later.