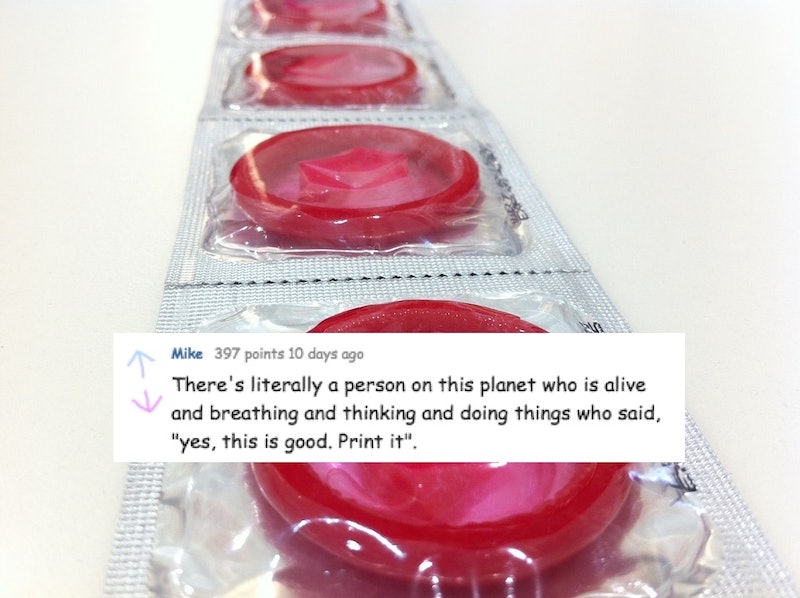 And today in Things The Internet Is Collectively Facepalming About As Hard As They Can, we have this: A donut-adorned condom wrapper meant to promote consent has gone viral due to the fact that it… uh… appears to do exactly the opposite. The condom, which was part of Say It With A Condom’s Consent Condoms line, featured an image of an illustrated donut, followed by the words “Go Further Without Consent” — a visual pun meant to read as “Donut (Do Not) Go Further Without Consent.” Alas, though, as a Redditor who posted the condom to the r/CrappyDesign subreddit earlier in September noted, the pun didn’t exactly land — and it's actually a pretty big problem.

The condom has since been removed from the Say It With A Condom online store; what’s more, the company is aiming to use this gaffe as a “teachable moment” for themselves by using it as impetus to improve their design vetting process, according to Us Weekly. So, y’know, at least there’s that — the issue has been recognized, the product has been removed from circulation, and the company is making efforts to be better moving forwards. That’s not nothing.

For the curious, here's what the condom looked like:

Oof. Yeah, that's... not great. Consider this your reminder that it is always necessary to obtain consent before going further — and that, if consent is revoked at any time, whatever activity you were engaged in needs to stop.

Originally launched in 2014 in conjunction with the creative activist collection FORCE: Upsetting Rape Culture, Say It With A Condom’s Consent Condoms aim to bring consent into every sexual encounter in a way that can’t be ignored. “The goal here is to upset rape culture by making a conversation about consent an essential, sexy part of any hook-up,” Say It With A Condom CEO and founder Benjamin Sherman told ThinkProgress when the campaign initially arrived. “We knew FORCE was the right partner for this campaign because we have the same end goals. We’re both trying to encourage consent in unique, fun ways that are just crazy enough to make a real difference.” (FORCE worked with Say It With A Condom on the Consent Condoms in 2014 only and is not involved in the campaign or the controversial donut design today.)

I would argue that not all of the designs are necessarily fun; many of them actually look quite severe, like this one:

This design (and several others like it) isn’t playful; the words are serious, and the yellow banner at the bottom of it actually reminds me of police tape, making the whole wrapper look kind of like a crime scene. This isn’t necessarily a bad thing — rape and sexual assault are, after all, serious issues — but it’s… a thing.

Many others, however, are fun, cheeky, cute, and/or sexy, like this one:

And the message of all of these designs is, of course, really, really important: It drives home the fact that consent absolutely needs to be a part of any kind of sexual activity (and a lot of non-sexual activities, too). It helps combat rape culture by building consent culture instead. That’s a more than worthy cause, and I do love that Say It With A Condom is championing it.

Alas, though, the road to hell is paved in good intentions — and that’s what appears to have happened with the donut condom design. Reminder: This is what it looked like:

The pun is difficult to understand at first glance; a lot of folks who commented on the Reddit thread it appeared in earlier this month can attest to that:

And, indeed, even finally getting the pun doesn’t really make the issue much better:

The gaffe does appear to be the result of simple human error; said Benjamin Sherman to Us Weekly, “We went through our normal checks and balances with this design. Whenever we create a new campaign we send it out to universities and domestic violence shelters for feedback and we didn’t receive any negative feedback.” Usually, said Sherman, if their designs don’t get the OK, they redesign the wrapper or pick a different tagline.

After the condom went viral, however, they realized the mistake. “We were like, ‘Wow, you know, this could really be interpreted as promoting non-consensual sex,” Sherman told Us Weekly. From here on out, the company will also begin asking its social media followers for feedback on each new design in order to prevent something like this from happening again.

So what made this design backfire so badly, given that the donut/do not substitution is so popular these days? After taking a look at a variety of visual puns involving the visual pun, I think it’s the fact that the slogan begins with the donut — that is, because of its placement, the donut looks entirely unconnected to the slogan on the wrapper. This visual pun (which is unconnected to Say It With A Condom — it is just an independent donut pun I found on Twitter) suffers from the same issue:

To me, this image doesn’t look like it’s saying “Donut judge me”; it looks like a picture of a donut, followed by the phrase, “Judge me.”

Meanwhile, these other visual pun Consent Condoms work because of where the image is placed:

In the first one, it’s sandwiched between words, while in the second, it’s placed at the end of the sentence — and because of those twostyles of placement, the donut reads as being part of the whole.

Either way, though, it’s discouraging that the donut design went all the way through what appears to be a relatively vigorous vetting process with no one catching it; every time something like this happens, all I can think is, “How did no one notice this?!” Precision matters — especially when it comes to deeply ingrained societal issues like rape culture.

At least, though, Say It With A Condom has moved swiftly to correct the issue — and, perhaps more importantly, is also being proactive about preventing oversights like this from happening again. It’s a simple formula: You mess up; you apologize; you don’t do it again; and you make a conscious effort to be better moving forward. That’s how we make positive change.