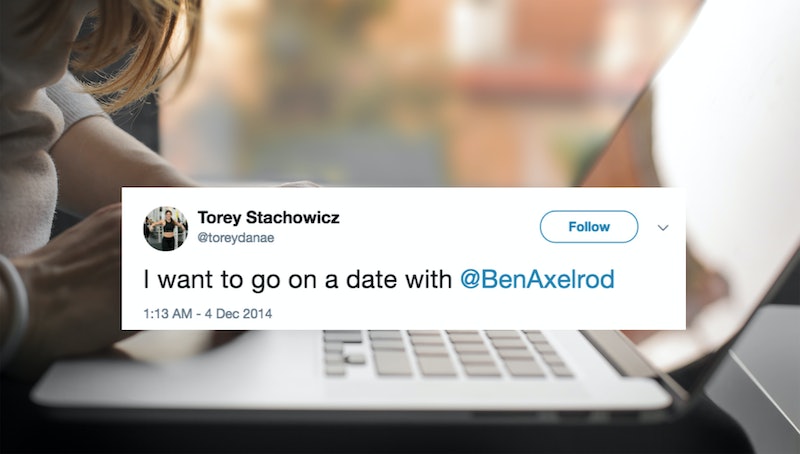 The internet has changed the game when it comes to finding luuuurve. Instead of having to, you know, talk to a person face-to-face, you can lazily swipe on a bunch of empty faces and hope one of them will end up being someone you don't hate. TBH, online dating is not great, but one happy couple managed to find Internet Love the right way — i.e., by meeting on Twitter. Four years later, they're engaged — and, appropriately, the groom-to-be popped the question in a tweet. Modern love is truly something to behold.

As Mashable reports, it all started in 2014, when Torey Stachowicz, a personal trainer in Cleveland, Ohio, tweeted that she wanted to go on a date with Ben Axelrod, a local sportswriter. It was a fairly brave move, considering she sent her request out to the world and didn't contain it in a private direct message, like I do with all my Twitter crushes (just kidding, I don't actually send any messages, I just fave all their tweets, I have no spine!). But Stachowicz's gambit worked, or at least it piqed Axelrod's interest in a potential free drink — he tweeted back, "you buying?" The rest, it seems, is Internet Dating history:

It appears Stachowicz did, indeed, find a fitting chicken fingers-replete locale for their first date, and thus began a relationship far more successful than any I've attempted through the World Wide Web. In fact, this relationship was so successful, that four years later, Axelrod tweeted this:

Then, he proposed, in a moment the Twitterverse was privy to as well:

It's a very good story, one that amplifies both the power of love, how success can happen when you ask for what you want, the potential social media has for bringing people together, and that you should always tag someone when referring to them on Twitter, or else they might not see it. I wish Axelrod and Stachowicz a lifetime of happiness and playoff wins for the Cleveland Cavaliers, and it appears the rest of the Internet is equally enthused by their love story, with other Tweetfluencers chiming in to congratulate the duo (on Twitter, obviously).

"Congrats @toreydanae @BenAxelrod !! Great story ... I hope the marriage is more Brie and Bryan than Lita and Kane," one user Tweeted, referring, I assume, to WWE star Daniel Bryan's relationship with Brie Bella. Another added, "Holy sheet. Congrats! That’s amazing! Torey, Great job bailing out Ben who clearly couldn’t ask women out himself and had to wait until someone cat called him on twitter."

Others pointed out that though one might doubt the strength of Love on Twitter, it can exist. "'Nobody falls in love over Twitter.' You may now officially be quiet," one person tweeted. And of course, there were the naysayers:

But, one quibble. I have had a Twitter account since 2009, and in the years since, I have proposed marriage to 1) Mets pitcher Noah Syndergaard, 2) Lindy West, 3) My friend Dave, 4) A writer for Newsweek who wrote something very nice about my old workplace, 5) Canadians who could give me healthcare, 6) the television program Bojack Horseman, and 7) an orange-flavored Red Bull. None of these entities have ever responded to my overtures, and I am very upset. If it could work out for Axelrod and Stachowicz, why can't it work out for me? I love you, orange Red Bull, so why won't you be mine?

Anyway, apparently finding romance on Twitter isn't even that unusual: