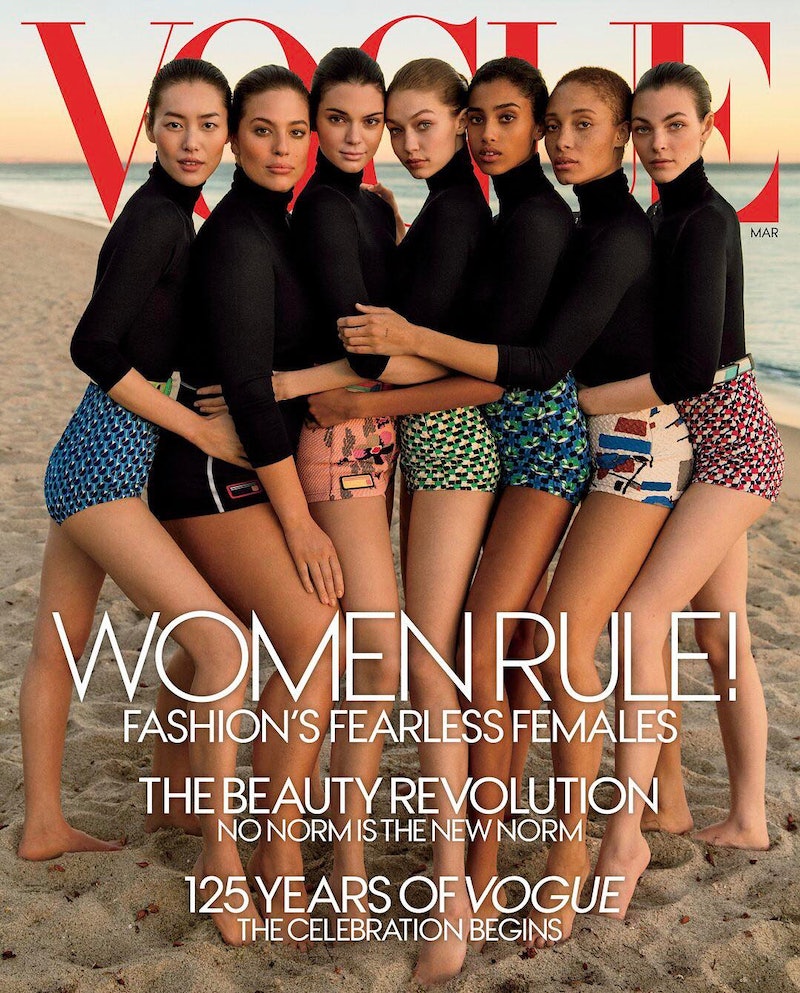 On February 8, Vogue revealed a cover that they called a "Great Beauty Shakeup." It featured a more-diverse-than-usual cast of models, including Ashley Graham, Imaan Hamman, Vittoria Ceretti, Adwoa Aboah, and Liu Wen.

"All are welcome. Anything goes," Vogue.com contributor Maya Singer declared about modern beauty ideals in the accompanying story. With this cover, the magazine sparked a much-needed conversation about diversity in the fashion industry, and how very far we still have to go.

Unfortunately, it's still rare to see dark-skinned women of color, people with disabilities, plus-size women, older women, and transgender women on the cover of fashion magazines. So much so, that any inclusion is considered worthy of celebration. However, there are still great strides that need to be made in representation, especially in fashion magazines that still perpetuate white and thin women as the pinnacle of beauty.

For example, one in five adults has a disability (that figure includes mobility limitations as well as disabilities in both thinking/memory), according to the Centers for Disease Control and Prevention. Yet, such a significant chunk of the population is rarely represented in fashion. In their annual analysis of magazine covers, The Fashion Spot found that glossies are dismal when it comes to representing people with disabilities. In fact, not a single major magazine put a model with a visible disability on a cover in 2016.

“Where are the darker-skinned black girls? And immediately after I thought, where are the disabled girls?” writer Keah Brown, who has cerebral palsy, tells Bustle about representation in magazines. “Do we not matter in terms of inclusivity?”

The exclusion of people with disabilities validates Brown's work as well as her fellow disability writers, activists, and designers.

“I always say that people with disabilities are thought about in two ways: As nuisances, inspirations/people to pity, and to be reminders that someone has it worse than you [or] we aren't thought of at all,” Brown says.

“In media it is the exact same thing. If we can't be inspirations, we are invisible.”

Similarly, it's a trend in magazines to exclude older women from their covers. The Fashion Spot found that only 34 women over the age of 50 graced magazine covers in 2016 — that's only five percent of all bookings.

A 2011 study in The Journal of Aging Studies found that the exclusion of older women from fashion magazines has a negative impact on their body image.

"It does lead to problems of negative body image," gerontologist Denise Lewis told Live Science about the study’s results. "It leads to issues that have people denying aging, so going to great lengths to continue to look like that ideal of a youthful person."

For dark-skin women, in particular, body image is a major issue. Colorism, or a system that privileges lighter skin, disadvantages darker-skinned women in myriad ways, especially in fashion. It's important to include Black women and women of color in fashion. However, proximity to whiteness — and the privilege that affords — is also worth considering.

The exclusion of darker women — or lightening their skin if they are included — feeds into a system that privileges lighter skin. Victoria’s Secret model Leomie Anderson called out the fashion industry for this in November 2015.

"I definitely feel that there has been a lot of improvement in the industry with [the] use of Black models, but I would definitely say that it has a long way to go especially with regards to shade," she told the BBC. "Lighter skinned girls get more work than darker skinned girls."

There are no official stats on how many darker-skinned models are cast for magazine covers and runways, but colorism in general has a tangible impact on black women in other ways.

Skin whitening, for example, is a multi-billion dollar business, according to sociologist Dr. Margaret Hunter, who spoke about skin bleaching in the Light Girls documentary. "Skin bleaching is a growing phenomenon around the world and it’s becoming a bigger business," she claims in the documentary.

Plus-size model Philomena Kwao told Elle Magazine that she even tried to lighten her skin because she rarely saw darker-skinned women in magazines.

"I had trouble recognizing that the depth of my skin tone is really beautiful because whenever people referred to a beautiful black-skinned woman, you'd see Beyoncé and Rihanna," she said. "So, you'd do harmful things to try and get to that color, like skin bleaching. I once tried those whitening soaps."

Though colorism is still a concern, magazines are getting better at including models of color. Of the 679 magazine covers analyzed by The Fashion Spot in 2016, 197 or 29 percent of them featured a non-white model. This is 6.2 percent more than in 2015 and an 11.6 percent increase from 2014.

When it comes to gender identity, however, fashion still has a way to go. Only 0.7 percent of models on the 2016 covers were trans models.

In a March 2015 interview and feature spread with Vogue, trans model Hari Nef, shown in the Elle cover above, addressed this exclusion of trans models. “I don't think fashion is interested in trans issues,” she said. “I can’t think of many fashion institutions or artists who have addressed 'trans issues' by name, can you? How many openly-transpeople are getting major work in the industry — models, designers, photographers? Can you count them on more than one hand? Fashion is having a moment with trans-aesthetics, not trans issues.”

Certainly, there's a lot left to be desired in the industry in general. Inclusion is a continuous journey. It won't be solved with one cover.

However, despite some of these disheartening facts, there are magazines who are meeting the challenge. For instance, Teen Vogue diversified the models chosen for their covers by including Amandla Stenberg, Yara Shahidi, and Rowan Blanchard. Viola Davis and Nyong'o graced the January covers of InStyle and Elle Magazine, respectively. Solange Knowles is on the March cover of Elle Magazine, meaning two of three of the magazine's feature stories in 2017 have focused on Black women. Rihanna is covering Harper's Bazaar's March issue. Naomi Campbell is slaying Town & Country's March issue.

Though magazines have only released two issues in 2017, it appears they're making an investment in diversifying their covers and their stories. It's a step in the right direction. As far as the future goes, magazines can continue being more inclusive by hiring people with disabilities and reaching out to marginalized communities for cover opportunities.

“Everyone who knows me knows that it is my dream to be in the cover of a mainstream magazine,” Brown says. “I think that it is all about reaching out to underrepresented and marginalized communities. I hope that they start doing the extra work to find people that will fit the theme of the magazine and to make sure those people feel as worthy of a cover as anyone else."

"Challenge the standard,” she says.