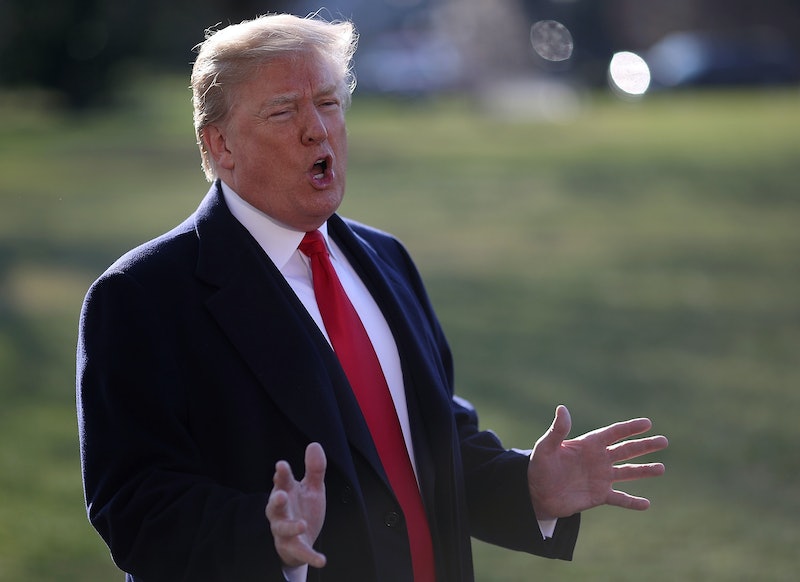 During a meeting with Congressional Democratic leaders earlier this week, President Donald Trump claimed that "tremendous amounts of wall have already been built," referring to the Southern border wall he has called for since his campaign. In a fact-check of this statement, NPR remarked that Trump has only managed to secure funding to improve existing fencing at the border, not to expand the wall. On Wednesday, however, the Department of Homeland Security released a curious border wall statement insisting that construction on the wall was proceeding rapidly.

As NPR pointed out, Trump promised during his presidential campaign that he would make Mexico pay for his border wall. When that didn't happen, he asked Congress for $25 billion — and lawmakers did not approve this particular request. But the DHS memo, titled "Walls Work," claims that this funding was, in fact, provided, and that the agency "began construction of border wall exceptionally quickly, in some locations in as little as nine months from funding to building." Many Twitter users were quick to point out that the statement contained multiple grammatical errors, such as missing articles before nouns.

"DHS is committed to building wall and building wall quickly," the statement read. "We are not replacing short, outdated and ineffective wall with similar wall. Instead, under this President we are building a wall that is 30-feet high."

The DHS memo went on to claim that it "expects to construct more than 330 miles of border wall in the U.S. Border Patrol’s highest priority locations across the Southwest border" — provided that it receives $5 billion during the 2019 fiscal year. GQ's Jay Willis, however, described this claim and the rest of the memo as "a dystopian bit of propaganda barely disguised as a hybrid of a white paper and a press release."

The agency also argued that the "newly constructed portions of the wall" — which, as Willis pointed out, seem to be taller fences rather than a wall — were "very effective" when "a violent mob of 1,000 people stormed our Southern border." The DHS appeared to be referring to an incident last month when American border officials fired tear gas at Central American migrants as they attempted to cross into the United States.

These inaccurate claims put forth in the DHS memo, coupled with its numerous grammatical errors, had many Twitter users questioning who had actually written the statement: a DHS official, or the Hulk?

Last year, The New York Times reported that the Trump administration was considering eight different border wall prototypes, with possible choices between concrete or steel, precast or filled on-site, and opaque or transparent. However, construction still has not begun on a new border wall, per The New York Times, and many obstacles still stand in Trump's way.

First of all, Trump will have to struggle to secure the funding required to build the wall he has proposed; Democrats have long been opposed, but some members of Trump's own party are also skeptical of the wall's efficiency. Secondly, the wall Trump envisions would disrupt the properties of numerous landowners — including SpaceX CEO Elon Musk, who purchased a site for his company at the border four years ago. Lastly, legal challenges to the border wall can stall construction for years, The New York Times reported, and perhaps indefinitely.