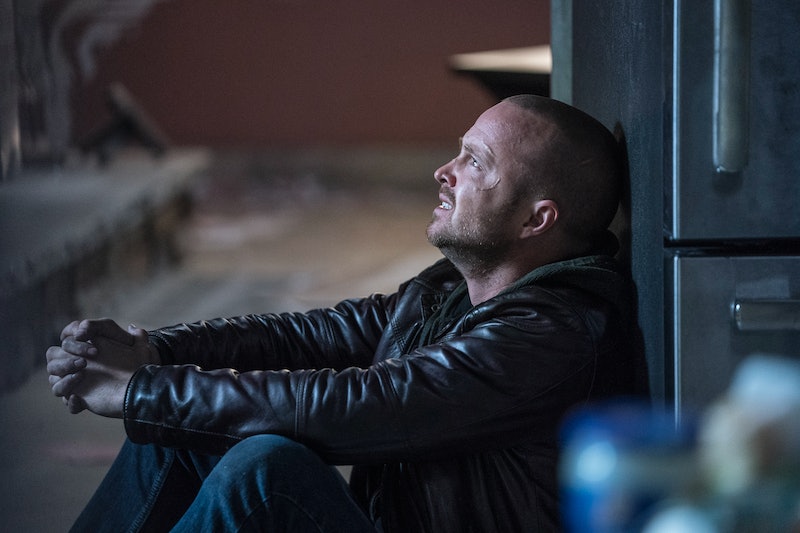 Major spoilers ahead for El Camino. It's rare that anyone in the Breaking Bad universe gets a happy ending. Which is partly why it was so surprising for fans to see Jesse finally get his in Netflix's El Camino: A Breaking Bad Movie. But, according to star Aaron Paul and the show's creator — and El Camino director — Vince Gilligan, it almost didn't happen. There was an alternate El Camino ending that was such a bummer, Gilligan knew he couldn't do that to fans.

The Breaking Bad finale ended with Jesse (Paul) driving off in the El Camino—hence the title of the new film—screaming his lungs out. After Walter White (Bryan Cranston) killed the neo-Nazis who had kept him captive, he was finally free. The ending was ambiguous, but it was also hopeful, leaving it up to the fans to decide where Jesse was headed. But, for the movie, Gilligan came up with a more definitive ending that, while plausible, probably wasn't going to win him any popularity contests with fans.

Gilligan originally wanted El Camino to end with Jesse getting arrested, according to a new interview with Entertainment Weekly. This idea stemmed from Gilligan's own questions about Jesse's fate after the Breaking Bad finale. Specifically, how did Jesse actually get away? "Because that’s no easy feat!," Gilligan explained. "And what if he didn’t get away? What if he got busted right around the next corner?”

Though Gilligan said he didn't get very far into writing that original ending, he imagined that Jesse would end up helping a young woman working as a housekeeper in a motel near the Canadian border. Jesse "goes into the process of saving her, knowing full well that he’s going to suffer for it, he’s going to get caught for it, but he does it anyway," Gilligan said. "And the last scene would be maybe him in a jail cell but at peace for the first time since the movie began."

Luckily, Gilligan's girlfriend Holly Rice helped talk him out of it. In fact, Paul himself never even knew about this possible conclusion, telling EW, “Wow…. He never said that to me." In the end, Gilligan gave Jesse a chance to find redemption in Alaska because, as he told Vulture, “sometimes you just got to give folks what they want.”

In an early flashback in El Camino, Mike (Jonathan Banks) is seen telling Jesse that he should head to Alaska, the "last frontier" to disappear for good. And that's just what Jesse does. With vacuum salesman/fixer Ed Galbraith's (Robert Forster) help, Jesse, now Mr. Driscoll, drives off to start anew. Watching Jesse drive off once again, this time unafraid of what's to come, offers fans the closure they didn't get six years ago. It's a pretty satisfying ending, but there's one thing Paul still wishes fans could see.

In the film, before Jesse drives off, he hands Ed a letter to Brock, the son of his late girlfriend Andrea (Emily Rios). Fans don't get to see what he actually wrote, but, according to Paul, there was an original scene where the contents of the letter would be revealed. "Originally the voiceover of that letter was how the movie ended," Paul told EW. Unfortunately, it ended getting cut from the film. "But Vince just thought, 'You know what? Maybe it's best left unknown,'" Paul explained.

Even though Gilligan gave Jesse a more definitive ending in El Camino, it wouldn't really be Breaking Bad if he didn't leave fans with a few questions.

More like this
'Bridgerton' S3 Teases Exciting Social Season For Penelope Featherington
By Bustle
You Definitely Know The Voice Of Shuri's AI In 'Black Panther: Wakanda Forever'
By Brad Witter
This James Bond Event At Abbey Road Studios Was A 007 Fan's Dream
By Samantha Rollins
'Avatar 2' Now Has A Teaser Trailer & Release Date
By Jack Irvin and Alyssa Lapid
Get Even More From Bustle — Sign Up For The Newsletter