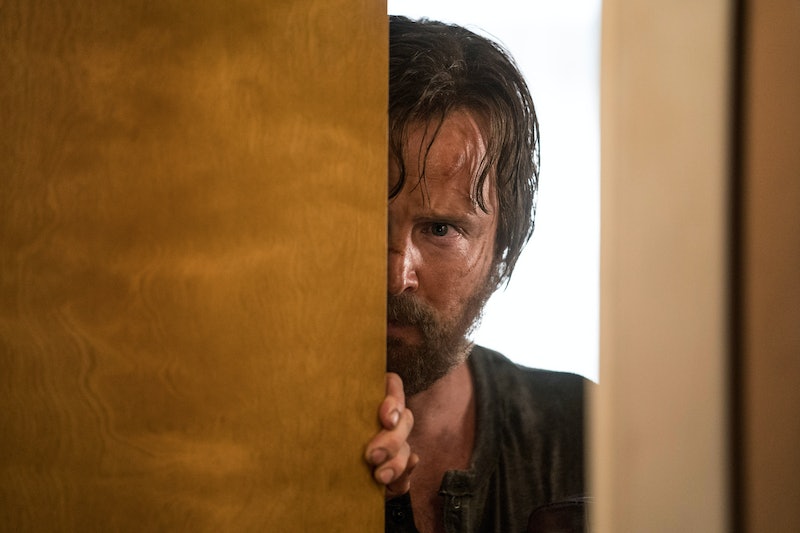 Sometimes sequels acknowledge the passage of time, and sometimes they pick up right where they left off. Netflix's highly-anticipated Breaking Bad movie is the latter sort, which opens mere seconds after the events of the series finale — even though over six years have passed in the real world. That was a very, very long time ago. So who died in the Breaking Bad finale, who survived, where exactly things left off… these details and more may be fuzzy if you haven't re-watched the series since it finished airing in 2013. Before you stream El Camino on Oct. 11, it's probably best to brush up on some of the finer points of the finale.

Naturally, fans are curious which of their favorite Breaking Bad characters will be popping up in El Camino, so it might be nice to recap which characters definitely won't be joining Jesse Pinkman since, you know, they're dead. Obviously, the list of fatalities on the AMC series is a long one — RIP Jane, Gale, Gus — and the body count was even higher than usual in the final season. That batch of episodes saw the deaths of major characters like Mike Ehrmantraut (shot by Walt), Hank and his partner Gomez (executed by Uncle Jack's gang), and Jesse's girlfriend Andrea (murdered by Todd).

Inevitably, the death toll only increased in the series finale, which ended in a bloodbath in the desert. Here's who lived, who died, and who tells their story.

After learning that Jesse is still alive from Badger and Skinny Pete, Walt buys a machine gun and heads to the headquarters of Uncle Jack's white supremacist gang, who is holding Jesse captive and forcing him to cook Blue Sky meth for them.

After getting them to bring Jesse out to prove that he's still alive, Walt tackles his former partner to the ground and remotely activates the machine gun, hidden in his trunk on a rotating turret. The ambush kills the entire gang except for Jack and his loathsome nephew Todd.

After Walt gunned down most of the brotherhood, Jesse took advantage of the chaos to finally get his revenge on Todd, the sociopath who had gunned down young Drew in the desert and assassinated Andrea to punish Jesse. Jesse wrapped his shackles around his captor's throat and broke Todd's neck.

After Todd's death, Uncle Jack was the only member of the Brotherhood left alive. He attempted to bargain for his life using the location of Walt's money, which he had dug up from the desert and hidden away. But Walt always knew this would be a one-way trip and had no use for money anymore — so he shot Jack in the head mid-sentence, earning vengeance for the murders of Hank and Gomez.

Shortly after the bloodbath, the recently dead Todd got a call on his cell phone from Lydia, the gang's methylamine provider. Walt answered it and was not surprised to find that Lydia wasn't feeling too well. He revealed to the traitorous supplier that, earlier in the episode, he had laced her Stevia, which she put in her coffee, with poisonous ricin. A smug Walt hung up on Lydia, knowing she'd be dead soon.

After Jesse speeds away from the compound in an El Camino, an injured Walt — who it's revealed was hit by a bullet during the ambush — wanders into the Brotherhood's meth lab and fondly strokes the cooking equipment. By the time police arrive on the scene, Walt is splayed out on the floor of the lab, dead, with a slight smile on his face.

So who's left standing when the credits roll on "Felina"? Obviously Jesse is still out there, as well as Badger and Skinny Pete; so are the surviving members of Walt's family, Skylar, Walt Jr, young Holly, and Marie; the Schwartzes, Gretchen and Elliott; orphaned Brock; and, of course, Saul Goodman, among others. How many of them will make an appearance in El Camino? Will Jesse successfully evade both the law and whoever rises to fill the power vacuum left behind by Uncle Jack's gang? Find out when the follow-up film debuts on Netflix on Friday, Oct. 11.

More like this
'Breaking Bad' Duo Walt & Jesse Are Back — In This Super Bowl Commercial
By Jake Viswanath
Shonda Rhimes Responded To The Surprise Exit Of A Day 1 'Grey's Anatomy' Figure
By Grace Wehniainen
Everything To Know About A Potential 'Lockwood & Co.' Season 2
By Gretchen Smail
This 'Gossip Girl' Wardrobe Error Has Gone Viral On TikTok
By Alyssa Lapid
Get Even More From Bustle — Sign Up For The Newsletter
From hair trends to relationship advice, our daily newsletter has everything you need to sound like a person who’s on TikTok, even if you aren’t.