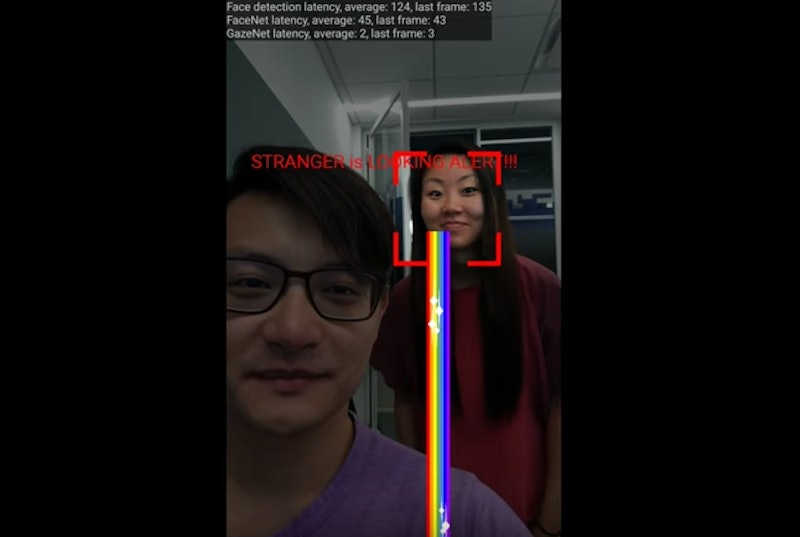 If you want to know discomfort, all you have to do is sit on the subway and look at your phone. There is no feeling quite like that of trying to respond to a text message or scroll through your camera roll without the fear of some sweaty person sitting nearby and peering down at your cell over your shoulder. Two researchers have the answer, with a new technology that tells you if people are looking at your phone over your shoulder.

Hee Jung Ryu and Florian Schroff are Google researchers; and they're about to present what's being called an "electronic screen protector" at the upcoming Neural Information Processing Systems conference, being held on December 6 in Long Beach, California. Using a Google Pixel phone, the researchers will demonstrate how the front-facing camera and eye-detecting artificial intelligence can detect when more than one person is looking at your screen, meaning you can review your selfies and sensitive conversations in peace. It sounds fairly reliable, too: the software works with different lighting and poses, and it can detect a face in just 115 milliseconds, recognize it in 47 milliseconds (per face), and recognize a gaze in a mere two milliseconds.

You can check out a quick demonstration of the screen protector in this YouTube video.

As you can see, the software has the ability to interrupt the app you're using and show a camera view of the creeper lurking. Plus, it identifies them with a Snapchatty-looking puke rainbow, which is all kinds of cool. (The red box around their head and "Stranger is looking alert!" notification don't hurt either.) Very likely, this software is able to work so rapidly because it's actually run on your phone, as opposed to be sent to cloud servers. Making this software even more special is that it is able to identify another person's gaze and face simultaneously, as well as in real time. Although face recognition has been around for a while, it's never been used in this manner — in conjunction with gaze recognition to show if someone is literally watching what you're doing.

It's a big step forward in personal security and privacy control, and it seems Google is all for it. According to Quartz, over the years, Google has made it easier for developers to use artificial intelligence on mobile devices. In fact, since 2015, their AI tools known as TensorFlow have gotten a facelift to take up less storage and computing power, now being referred to as TensorFlow Lite.

Google had already been toying with gaze detection, too. As far back as 2003, they registered a patent for being able to track a computer mouse pointer with a person's vision.

With the latest software, complete phone privacy could be possible no matter where you are or how many people are around — and could reveal unwanted spies almost immediately, stopping you from whatever private matters you're engaged in and displaying live footage of the offender.

Facial recognition has been quite a hot topic lately, what with the release of the iPhone X, which offers a new way to unlock your phone. Instead of punching in your security code, you're able to unlock your smartphone simply by showing it your face. Although there were some doubts about the accuracy and speed of this new technology — especially after pairs of twins were able to fool it — it's proven to be quick, concise, secure, and capable of learning, demonstrating that facial recognition has come a long way and is more sophisticated than ever.

While Ryu and Schroff's electronic screen protector seems promising, Google has not announced if or when it plans on implementing it or allowing other vendors to do so.