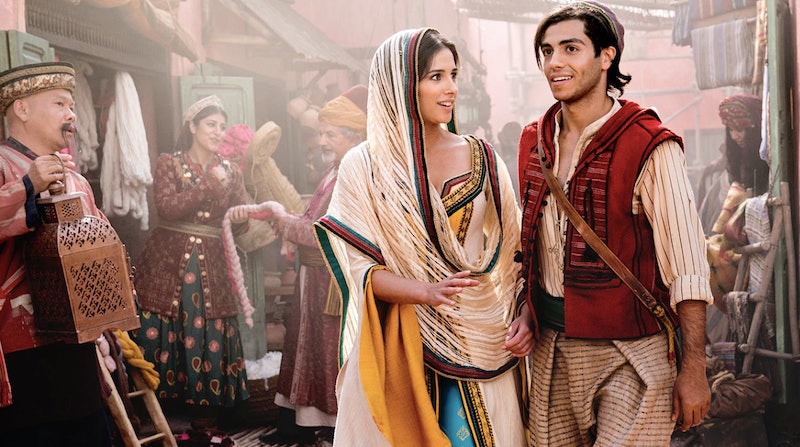 Let me share this whole new live-action Aladdin soundtrack with you, which features Zayn's take on "A Whole New World." No surprise, Zayn's version is a bit more sultry than Aladdin and Jasmine's. So, don't you dare close your eyes or your ears when checking out Zayn's "A Whole New World" video.

On Thursday (May 9), Zayn dropped his "A Whole New World" video from the new Aladdin movie, in theaters May 24. With it, the former boy bander turns the classic ballad into a smooth R&B jam. The song's release was accompanied by a Disney press release, obtained by Bustle, which revealed more details on the soundtrack, which will also include a new song sung by Princess Jasmine (Naomi Scott), "Speechless."

According to the press release, the song, written by original Aladdin composer Alan Menken and La La Land songwriters Benj Pasek and Justin Paul, is "Jasmine’s big breakout song in the film about finding her voice." And fans will get to experience her voice more than once, since the official soundtrack includes Part 1, 2, and a full version of the track.

Zayn is bringing a little of his own magic to this single with help from up and comer Zhavia Ward, who sang on Diplo, French Montana, and Lil Pump's single "Welcome To The Party" off the Deadpool 2 soundtrack. Turns out, Ward was handpicked by Zayn to appear on the song, according to the press release.

"ZAYN could have chosen any artist in the world to collaborate with on the duet, but he personally selected Zhavia for her unique perspective, powerful vocal abilities and to platform a talented new artist," Mitchell Leib, president of Music & Soundtracks for the Walt Disney Studios, said in the statement, "ensuring that the audience could discover this song, again, for the first time.”

What fans seemed to discover after watching this video is that Zayn is actually Aladdin and they've got the receipts to prove it. "Zayn is the only Aladdin I know," user @stupidBeau tweeted.

"Zayn looks like Aladdin more than Aladdin himself," a fan named @zjm_strong tweeted with a side-by-side of the two. "Or maybe Aladdin is the one who looks like Zayn we will never know." The greatest mystery of our time.

Zayn's new interpretation of "A Whole New World" adds more than a little star power to the soundtrack, but it's not the only new rendition of a classic Aladdin fans will get. Will Smith's Genie, will, yes, be rapping "A Friend Like Me" with a little help from DJ Khaled.

Disney teased this hip-hop update in its official Aladdin trailer, and the song will also be featured in the film’s end credits. According to the press release, Smith's "A Friend Like Me" will also get a video that could feature his less blue new CGI Genie and let's hope a CGI version of Khaled, too.

Don't worry, fans of the original will also get to hear their favorite Aladdin tracks. But there's also nothing wrong with adding a new spin for a whole new audience that is ready to take a ride with Aladdin and Jasmine.

More like this
Jennifer Coolidge Recites “Jenny From The Block” Beside J.Lo In Her First TikTok
By Jake Viswanath
Cruz Beckham Teased New Music With An Adorable Nod To Mom Victoria Beckham
By Stephanie Topacio Long
The Spice Girls Are Set To Reunite At King Charles III’s Coronation
By Sam Ramsden
Britney Spears Shares & Deletes Photos Of Justin Timberlake From 22 Years Ago
By Jake Viswanath
Get Even More From Bustle — Sign Up For The Newsletter
From hair trends to relationship advice, our daily newsletter has everything you need to sound like a person who’s on TikTok, even if you aren’t.