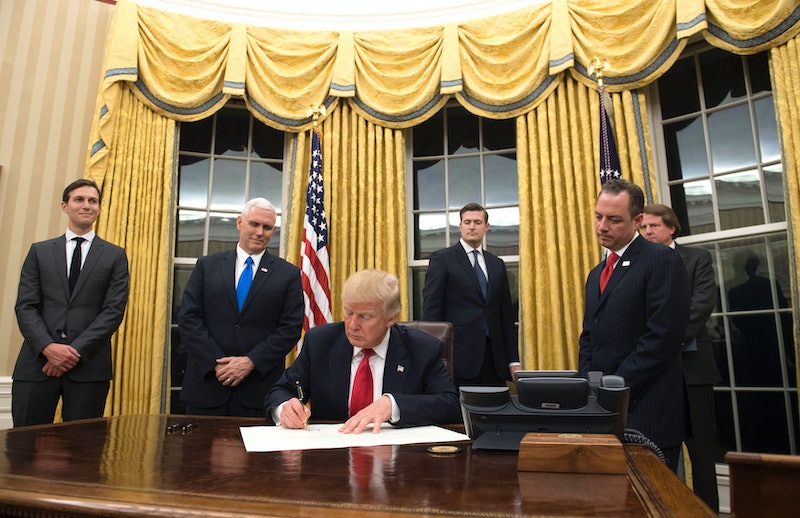 We are sadly (many of us at least) reaching a point where a feminist meme about an alternative White House administration is just the medicine the doctor ordered. At least, it's the medicine the doctor ordered before Obamacare is potentially repealed, and as many as 43,000 Americans die annually because they don't have access to doctors or affordable health care. (Check out that Doomsday Clock, folks).

All health care concerns and tangents aside, let's circle back to this vital and healing meme (a sentence I wouldn't have dreamed of typing five years ago). By now, most of the internet has been (sadly) exposed to the photo of Donald Trump signing an anti-abortion executive order while surrounded by his cabinet full of grimacing and approving men. If the symbolism of a room full of men signing restrictive legislation about women's bodies isn't potent enough on it's own, the Global Gag Rule Trump signed (also known as the Mexico City Policy) will bar foreign aid groups from receiving U.S. funds if they provide abortion services or educational information about how to get an abortion.

As a humorous and sadly salient way of holding up a mirror to the absurdity of a group exclusively made up of men deciding what women can do with their bodies, the French feminist group 52, named after the fact that women make up 52 percent of France's population, made a satirical meme that features an image depicting a photoshopped Hillary Clinton and a White House cabinet full of women signing away men's reproductive rights. The caption, when translated into English, says, "It's now illegal to ejaculate unless it's for reproduction."

This meme provides a straight-shooting and gorgeously petty mirror conveying the absurdity of what's happening to women's reproductive rights. It provides brief catharsis, if nothing else.

The original source image for this photoshopped piece of modern viral artwork was taken in 2009, when former president Barack Oback awarded a congressional medal to the WASPS, the Women Airforce Service Pilots who served the military during WWII and were previously largely unrecognized by the general public. So, in a sense, even the origin story of the photo used in the meme adds another pro-woman layer to the satire.

In its own way, it is sad how ludicrous it looks to see a picture of a room full of women signing away men's reproductive rights, because it's so far from anything that could currently happen in the United States. Yet, seeing the picture of Trump and his mostly white male cabinet signing away women's rights feels far less shocking in comparison. That in itself is deeply telling of where we're at. Nonetheless, it's good to laugh, even momentarily.

More like this
MOBO Awards Found Kanya King On The Woman Whose Grit & Determination Spur Her On
By Kanya King
Prince William Condemns “Unacceptable” Comments Made To A Black Guest At Buckingham Palace
By Shahed Ezaydi
Bustle Daily Newsletter: December 6, 2022
By Hayley Schueneman
Kim Cattrall Had A 'Sex And The City' Reunion With Creator Darren Star
By Grace Wehniainen
Get Even More From Bustle — Sign Up For The Newsletter