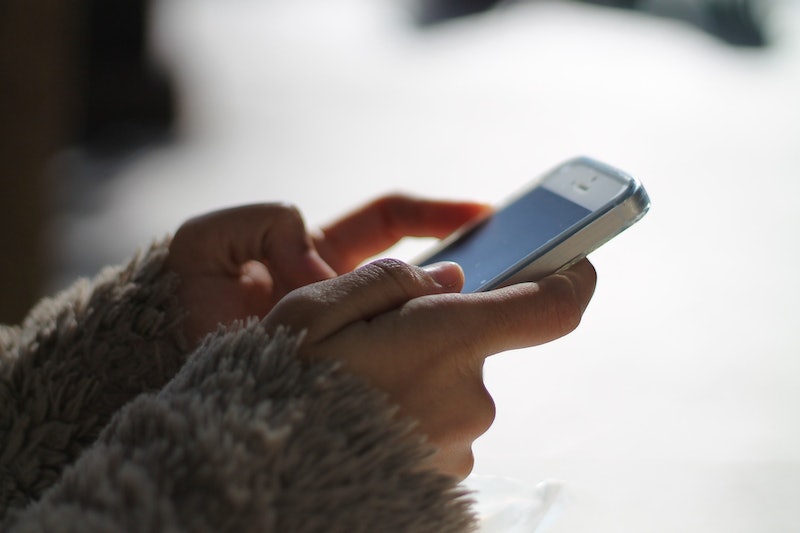 If you’re a regular WhatsApp user — or even just an occasional one — here’s something you’re going to want to look out for: A fake “WhatsApp” link is making the rounds, and it can seriously mess up your electronic devices. The message that’s being shared along with the link purports to allow users to install WhatsApp in different colors; however, it’s unaffiliated with WhatsApp, and instead results in users downloading harmful adware. The good news is that at least one key part of the threat has been neutralized for now — but in case you’re curious, here’s what to pay attention to in order to keep yourself safe online.

It probably goes without saying, but just so we have all our bases covered, WhatsApp does not come in other colors now; it still looks the same as always. “The message … is a hoax from an unauthorized third party and did not come from WhatsApp,” the WhatsApp Support Team tells Bustle in an email. They advise disregarding the message and not sharing it with your contacts.

The Next Web reports that the scam was first spotted by Reddit user u/yuexist, who posted screenshots of the whole thing in action to the r/Technology subreddit early last week. According to u/yuexist, users receive a message saying that WhatsApp is now available in different colors (the exact message is “I love the new colors for whatsapp”) including a link that looks like it goes to a page on WhatsApp’s website:

But that’s where your first clue is that the owls are not what they seem: If you look closely at the URL, it’s composed with Cyrillic figures which, to an English speaker, look like they spell out the word “whatsapp.” But that’s not actually what it says; the “what” part of the word uses the Cyrillic letters ш һ, а, and т. We don’t know who may have created the scam (yet), but according to online identity provider WhoIs’ information about the fake “шһатѕарр DOT com” site, the domain was registered on April 28, 2017 — so regardless as to who is behind it, it’s quite recent.

If you click or tap on the link (which you should not do under any circumstances), it just gets fishier: First, in order to “activate” the “new function,” users are required to share the link with 12 people or seven groups (thus spreading the scam).Then you’re made to download several pieces of adware — after which you’re notified that the “new colors” are only available for WhatsApp on the web and told to download an extension called BlackWhats.

The Next Web reports that Google has removed the extension from the Chrome store, so BlackWhats is no longer an issue. However, if youreceive any messages from any of your friends or from strangers boasting about new colors for the app, I still recommend deleting said message immediately.

As Napier Lopez at The Next Web points out, the red flags of the scam are obvious if you’ve got even a passing familiarity with the internet — but not everyone is. “There are plenty of WhatsApp users who don’t spend their time on tech blogs and might fall for it — the fake URL is certainly convincing enough at first glance,” writes Lopez. “The extension itself has over 16,00 users and a 4 star rating from 55 ratings, though there are only 3 text reviews — it’s hard to tell if these ratings are somehow fake.”

But there’s help available, too: WhatsApp actually has an entire FAQ page geared specifically towards addressing scams and spam which provides some useful information, particularly for those who may not beincredibly tech-savvy. “We work diligently to reduce any spam messages that come through our system. Creating a safe space for users to communicate with one another is a priority,” the page reads. “However, just like regular SMS or phone calls, it is possible for other WhatsApp users who have your phone number to contact you. Thus, we want to help you identify and handle these messages.”

If you receive a strange message, and any of the below is true about it, you’re probably looking at a scam:

The sender claims to be affiliated with WhatsApp.

The message claims you can avoid punishment, like accountsuspension, if you forward the message.

The message content includes a reward or gift from WhatsAppor another person.

Again, the recommendation is always to ignore and delete the offending message, and block the sender if they’re a complete stranger to you. If they're your friend, you might want to get in touch with them via some other means outside of WhatsApp and let them know what's going on.

The moral of the story is pretty much the same as always: Don’t click on strange links, and if something looks like it’s too good to be true, it probably is. Stay safe out there, everyone.