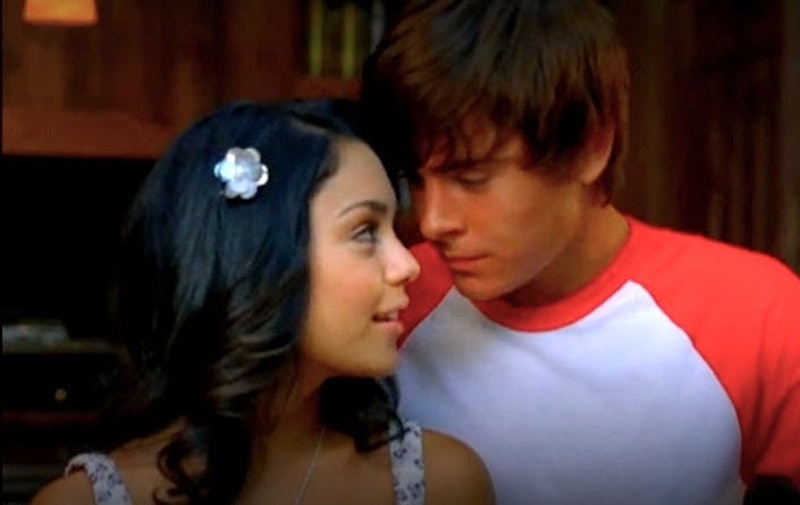 Once a Wildcat, always a Wildcat. It's a motto that any High School Musical fan could get behind, especially if it's the name of a new HSM movie. A trailer for High School Musical 4 spread rapidly on Facebook earlier this week, and fans went crazy seeing the East High gang all grown up and back together again. Unfortunately, this trailer isn't real, but it's so well made that it's got fans really wishing it was.

This fan-made HSM movie, titled Once A Wildcat, looks at where our very favorite high school grads are now, a decade later. "A lot can happen over 10 years," the trailer lets us know. And we're able to see just how much so in this clip that has us catching up with Troy Bolton (Zac Efron), Gabriella Martez (Vanessa Hudgens), Chad Danforth (Corbin Bleu), Taylor McKessie (Monique Coleman), Sharpay Evans (Ashley Tisdale) and her brother Ryan (Lucas Grabeel) before they catch up at their 10-year reunion.

Sharpay seems to be living out her dreams of being a star, taking a ballet class that we're sure is helping her with her theater career. Surprisingly, Ryan took the "fast track to the whole marriage and kids thing," while Gabriella seems to still be figuring things out job-wise. And Troy, well, he's still pining away for his high school sweetheart. Turns out, these two broke up in the years since we last saw them, which is pretty heartbreaking.

But as BuzzFeed pointed out, the trailer is actually just a mix of the High School Musical cast's post-HSM movies and was posted on YouTube nearly a month ago. Look close and you'll notice that Troy's scenes are a mix of shots from Efron movies like That Awkward Moment that have been perfectly cut together to look like a whole new trailer. Seriously, the person who made this is basically a genius with Final Cut Pro.

The creator of the trailer, who goes by the name hsmutube on YouTube and makes videos that give a "different look at High School Musical." The loyal fan even wrote a whole synopsis for this fake movie, that honestly, sounds amazing:

As East High's alum prepare for their ten year reunion, they realize a decade of change isn't always a good thing. Now in their late twenties, these former wildcats are living out their dreams, starting families, and for some, looking for a second chance at love. It's a reunion like no other, as they try to find what they've been looking for all these years.

Being that this pretend trailer got the hashtag #HSMreunion started popping up on Twitter shortly after the video hit Facebook, it's clear there's a lot of people out there that would like to see Troy and Gabriella duet one last time. It's why you can't blame anyone for being completely heartbroken once they found out this was a fan-made trailer.

While this trailer was a fan creation, High School Musical 4 is really happening. Unfortunately, it's without anyone from the original cast. Last year, Disney Channel announced High School Musical 4: East Meets West would be "the start of something new" for the franchise, launching a casting call for the film that focuses on the rivalry between the Wildcats and the West High Knights.

So, is there any chance the original HSM crew will ever reunite for one more movie? Efron told E! in 2014 that the cast was definitely thinking of it. "I continue to see all the guys from High School," he said. "Every time we do… there's just this look between us. It's so cool because we never forget a single moment of that experience."

Since we're all in this together, maybe we can get another movie made with the original cast by just tweeting how much we need it to happen. Heck, it worked for the upcoming Twitter-inspired Lupita Nyong'o and Rihanna movie, who says it couldn't work again?