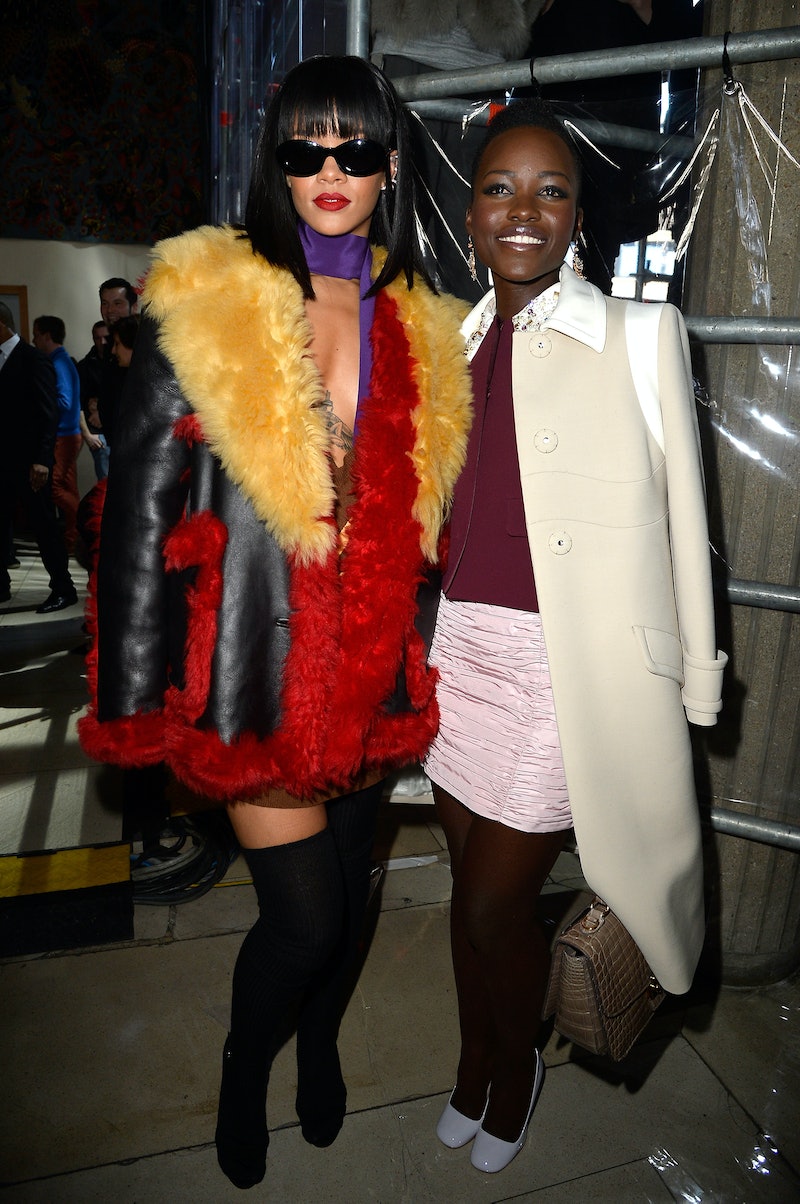 Did the idea of a movie starring Rihanna and Lupita Nyong'o, directed by Ava DuVernay, and written by Issa Rae sound like an idea that was too good to be true? Well… for once, it wasn't! This Monday, Entertainment Weekly revealed that Twitter's Rihanna and Lupita Nyong'o buddy movie is actually happening, and it will be coming to a living room near you, courtesy of Netflix. The upcoming film's journey from social media to streaming service has undoubtedly got to be one of the most unusual stories in Hollywood history. So how did the Rihanna/Lupita movie go from Twitter to Netflix, exactly?

It's hard to believe that an idea that could be summed up in 140 characters or less could have attracted a Grammy-winning recording artist, an Oscar-winning actor, the Emmy-nominated creator of HBO's Insecure, and the acclaimed filmmaker behind Selma… and yet, here we are. The pitch was first floated on Tumblr and Twitter in response to a picture taken of Rihanna and Nyong'o sitting next to each other at the 2014 Miu Miu Fashion Show.

Bustle has reached out for comment to the originators of the concept, Twitter user Kateria (@WHOOPHERASSKOURTNI), and the Tumblr user Roxy (@elizabitchtaylor), but have not heard back yet. In a statement made to Variety, Rae's reps assured that, "the original Twitter users who imagined the concept for this film will be credited and included in some form."

While Rihanna and Nyong'o expressed their enthusiasm for the concept, other Twitter users recruited DuVernay and Rae to the cause — both of whom also seemed on board with the idea. But what could have just been a friendly joke or a what-if pipe dream quickly became more than that. Apparently Hollywood was as into the pitch as the Twittersphere… because just almost exactly one month later, the project already seems well under development. Per EW's report, Rae has already started work on the movie's script, while DuVernay has committed to beginning work on the film in 2018, once she wraps filming on Disney's A Wrinkle In Time.

But a writer, director, and two leading ladies will only get a project so far unless there's a studio willing to help fund and release it. And that's where Netflix comes in. The team brought the idea to Cannes Film Festival, which is currently underway in France, and pitched it to the many studios reps assembled there. While reps usually attend Cannes to watch film premieres and bid on the ones they like, they apparently didn't need to see this movie — or even a finished screenplay, for that matter — to know it was going to be brilliant.

According to EW, a "dramatic negotiation session" ensued, and ultimately "Netflix landed the project in a very aggressive bid, beating out multiple other suitors." One has to imagine that most of the major studios were in the mix in an attempt to land the film in theaters, given the "dramatic" nature of the auction — which just goes to show how badly Netflix must have wanted it. This development reunites DuVernay with the streaming service, which also released her Oscar-nominated documentary 13th in October of last year.

While there's no denying Netflix's prowess when it comes to original television series, this is perhaps the company's biggest move yet into the world of feature films. This high-profile project may be Netflix's most highly-anticipated original film yet, joining a growing roster of acclaimed movies like 13th, Beasts Of No Nation, What Happened Miss Simone?, Brad Pitt's upcoming War Machine, and Okja, which just last week stirred up controversy among some Cannes attendees for being the first Netflix movie to ever receive a world premiere at the film festival.

If this exciting news is any indication, those French cinephiles better get used to Netflix's presence at their prestigious event. I have a feeling Rihanna, Nyong'o, DuVernay, and Rae might all be back there in a couple of years to show off the amazing movie they've put together.