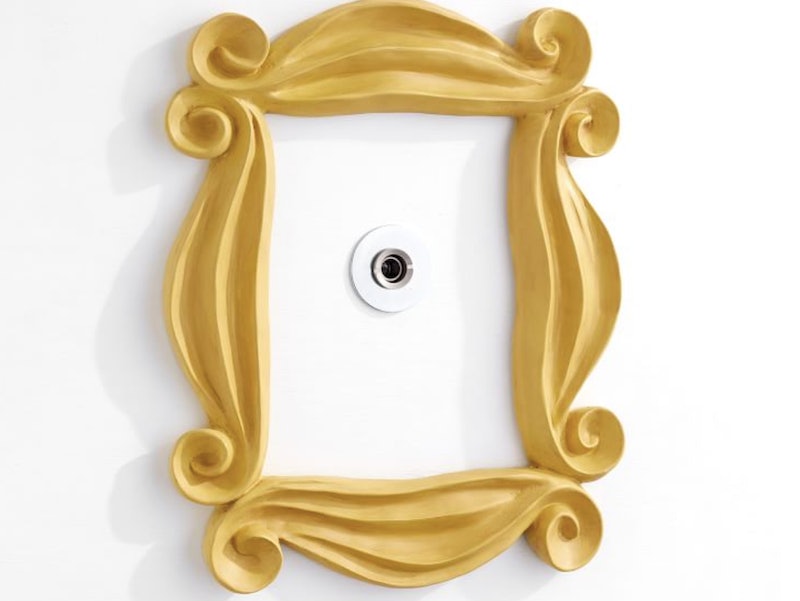 It is a scientific fact that no millennial will ever be able to live in the Friends apartment and its approximately 34,000 feet of prime, West Village real estate. But my god, can be we pretend. If you really want to get your Monica on, you can now get your hands on the gold peephole frame from the Friends door — or, at least, a pretty awesome replica from Pottery Barn. Who knows, maybe it will be a portal that can transport you into another world.... with cheaper rent?

You might remember the big launch of the Pottery Barn’s Friends collection, which debuted in July — it was one of a huge wave of celebrations and releases marking the 25th anniversary of the show. But on Oct. 30, the company released a whole new round of Friends merch to help you roll into the holiday season on a high, including the new peephole frame. And there's no denying that the iconic frame from Monica's apartment is one of the most memorable images from the show — it got a lot of screen time on that bright purple door. So if you really want to fly your Friends flag high, this should do the trick.

This little beauty costs $29.50 (and doesn't include the peephole) — which isn't cheap as far as wall decor goes, but if you painted your door purple the you could be living that Friends dream every darn day.

There are plenty of other Friends-inspired offerings in the Pottery Barn X Friends collection — some holiday-themed and some just legit lovely home decor. There are budget options like a Central Perk mug or, if you want to really commit to your theme, you can get the famous apothecary table from the Season 6 episode titled, well, "The One with the Apothecary Table." Some of the items may run steep, but then again, people get very into their love for the show.

There are few shows that have proven to be hits that transcend generations — but Friends is still proving popular, even 25 years later. Some people celebrate its popularity by watching rerun after rerun after rerun until they can quote every line and live on a blend of trifle and shepherd's pie alone — but some might just want a gentle nod to the show in their home decor. If that sounds like you, let the peephole frame be your doorway into the Friends universe.