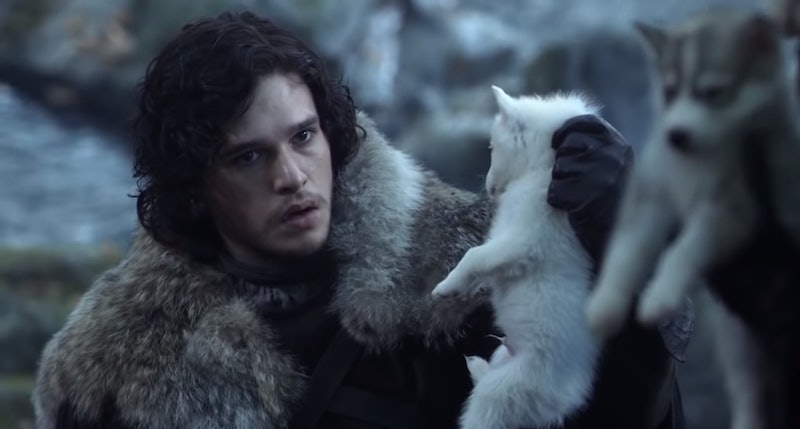 The wait for Game of Thrones' final season is almost over, but fans are still discovering new clues hidden in the series. As reported by Metro, Reddit user Danciro20 pointed out that Ghost has been a clue to Jon Snow's heritage all along. While this isn't exactly surprising, it is interesting to look back on Season 1, and realize that Jon's true paternity has been hinted at since the beginning of the series.

"Jon's pet direwolf (sigil of House Stark) Ghost has WHITE fur and RED eyes. And the Targaryens have WHITE hair and their sigil a RED three-headed dragon. AND JON SNOW (AKA AEGON TARGARYEN) IS BOTH STARK AND TARGARYEN.

Coincidence? Probably. But if not then bravo George RR Martin."

There are no coincidences in Game of Thrones. Right from the start, the series has been careful to plant seeds for future stories. Despite never being confirmed, Ghost does feel like an embodiment of both sides of Jon's lineage, as well as a living reminder of his outsider status.

Remember, Jon is the one who points out to Ned that there are five direwolves, one for each of his trueborn children. Jon's words express a belief that he doesn't think he deserves one of the pups, because he's not a true Stark. But then there's little Ghost, the runt of the litter who looks nothing like his five siblings. And yet, he's still a direwolf, just as Jon is still a Stark — he just happens to be a Stark and a Targaryen. It's easy to interpret that as meaning that Jon is a white wolf, just like Ghost. He's an outlier within his own family, but they're still his family.

There are more portents packed into the scene where the direwolves are discovered. Before Ned and the boys find the pups, they find a stag dead in the woods. In retrospect, that could have been a hint that House Baratheon (whose sigil is a stag) was doomed. Furthermore, the direwolves' mother dies because of her entanglement with the stag — much like how Ned's agreement to go to King's Landing with Robert led to the Stark children losing both of their parents.

Ultimately, that one scene sets up much of what was to come, and Ghost's appearance is no small part of that. As of the end of Season 7, Jon has no idea that his father is Rhaegar and his mother is Lyanna. He's still unaware of his true destiny and the fact that he was born of two great houses. Maybe, when he finally learns the truth, he will look at Ghost with new eyes and realize the path forward is about nurturing both sides of himself: the dragon and the wolf.

If Jon is destined to sit on the Iron Throne, then he's going to need to embrace his heritage as a Targaryen while holding on to everything he learned from Ned. His red-eyed, white direwolf seems to symbolize both of his fathers — Ned and Rhaegar — and their desire to protect their son as he moves ever closer to realizing his destiny. Ghost is first and foremost Jon's companion, but it's also clear that the beautiful direwolf's appearance has been pointing fans (and Jon) toward the truth since the show began.