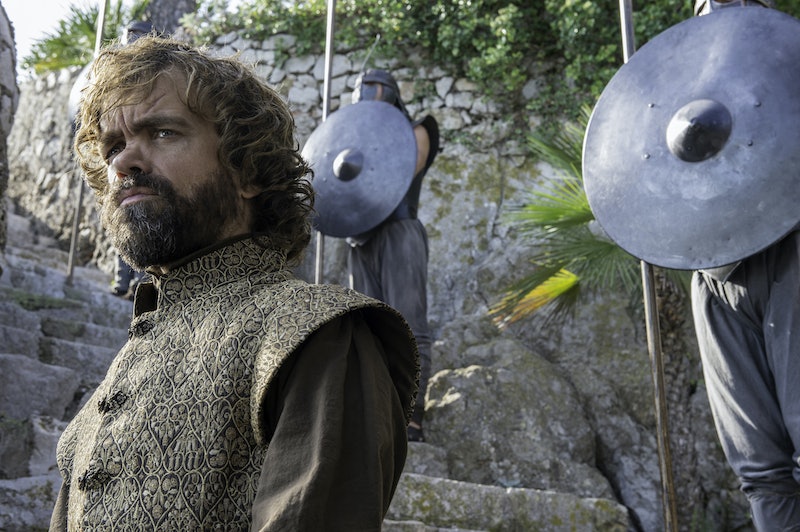 Say what you will about Jaime Lannister, but the man puts his family first, as he demonstrated when he helped his little brother Tyrion escape execution in Season 4. Heading into Season 7, the Lannister brothers are on opposite sides of the battle for the Iron Throne, and a new Game of Thrones fan theory about Tyrion bringing down the Lannisters could point to a betrayal Jaime can't come back from.

Reddit user @Professor-Reddit theorizes that Tyrion will lead a sack on Casterly Rock using his knowledge of the castle's sewers and drains to help Daenerys' army make their way inside. The theory points out The Unsullied appear to be attacking a castle that belongs to House Lannister in the Season 7 trailer. It would make sense if it was the Lannister's ancestral home, especially since Tyrion was once put in charge of the sewage system by his father. Taking Casterly Rock would be a bold move, and one that is likely to draw Cersei's army away from King's Landing. If the Queen allows the Mother of Dragons to take her childhood home, it could be seen as a sign of weakness. However, if she splits her defenses, it will leave her vulnerable — which I imagine is exactly what Daenerys wants.

As these two formidable queens head into battle, Tyrion and Jaime are destined to be caught in the crossfire. These two have always loved each other deeply, as their heartbreaking goodbye scene proved. However, Jaime also loves his sister, and at least for the moment, he is firmly on her side. Meanwhile, Tyrion is the Hand of the Dragon Queen, and he is equally committed to her cause.

The larger implication of Tyrion possibly directing a siege on Casterly Rock is that it would almost certainly set up a scenario where he betrays Jaime. The youngest Lannister is in an impossible position. On the one hand, he owes his brother his life. On the other, his brother is the only thing standing between him and the pleasure of ending Cersei's reign. He can either betray his queen or his brother, and I have a hard time imagining Tyrion turning on Daenerys.

Tyrion can't have it both ways, and if he plans to stay true to Daenerys, then he will have to accept the idea that his brother is the enemy. Whether the castle in question turns out to be Casterly Rock or not, Season 7 of Game of Thrones appears to be putting the Lannister children on a collision course with one another. Jaime is once again stuck between his siblings, but the situation is far more dire than it was when they were squabbling children.

Don't be surprised if Tyrion ultimately turns his back on his brother for the greater good of Westeros — and yes, no matter how this storyline ends, it seems destined to shatter your heart.