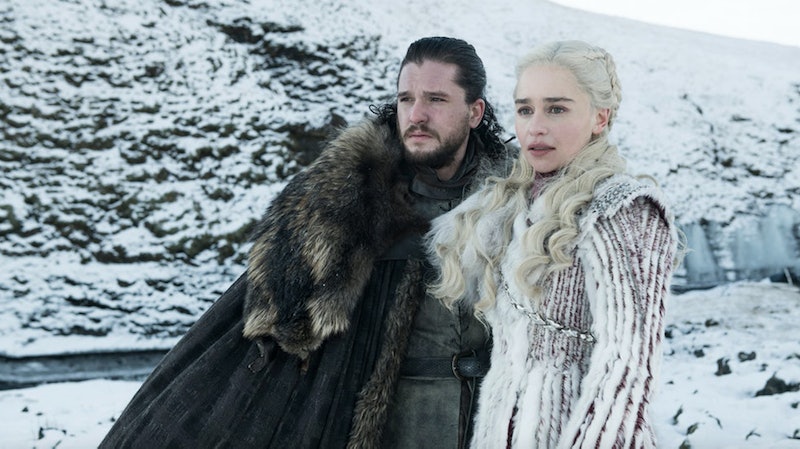 SPOILER ALERT. OK, don't worry — I'm not going to spoil anything. Instead, I have an alert about spoilers. If you're as worried as I am about Game of Thrones spoilers ruining the finale for you, there may be a way to soften the blow. Game of Thrones spoiler insurance has arrived, which must mean we have officially reached peak Game of Thrones. Endsleigh Insurance Services, a UK insurance company, is offering an actual "Spoiler Insurance Policy," in case Game of Thrones is ruined for you. I know, money can never heal the huge hole in your heart that would come with the last ever episode being spoiled, but maybe you can use it to eat, drink, or wax your sorrows away — whatever floats your boat, I'm not going to tell you how to spend your money.

Now this isn't insurance in the traditional sense, because you can apply after it's already been spoiled for you. You just fill out a form on the company's website — including a section for the worst spoiler you might have heard — and then ten winners will be chosen and given £100 (or about $130) for their troubles.

"The night may be dark and full of spoilers, and as much as we’d love to offer you a real spoiler insurance policy, our Game of Thrones inspired competition will be offering NOW TV passes and £100 pay outs to 10 lucky winners," the company's website explains. "We know that accidentally stumbling across a Game of Thrones spoiler is one of the worst things to experience if you’re a fan of the show. So, if you’ve had your viewing experience tarnished by a spoiler or plot reveal, complete the form below to be entered into a prize draw for your chance to win!"

One of the reasons this makes sense in the UK is the weird airing times that we have to put up with over here. If we want to watch Game of Thrones the same time that it premieres, you have to wait until 2 a.m. on Monday morning. Either that or you have to plug your ears until it airs again at 9 p.m. Monday night (unless you're lucky enough to be able to watch it on a catch-up service). But it can be a tricky business, especially for people like me who live on the internet and only on the internet, which is indeed, full of spoilers at every turn.

If you want to apply, the competition is open until Sunday, May 26 and if you're one of the lucky winners then they'll contact you by Friday, May 31. Then you can take your money and use it dry your spoiled, spoiled tears.

There is no way to completely avoid running into Game of Thrones spoilers if you can't watch it the moment the finale aires. You could cover your eyes and ears, run to a cave, hide there — and there would still be some stupid swamp animals talking over the gooey details with the Loch Ness Monster. That's just the way the world is at the moment. But, at the very least, a little money might help ease your pain — and take revenge on whoever spoiled it for you. DRACARYS.