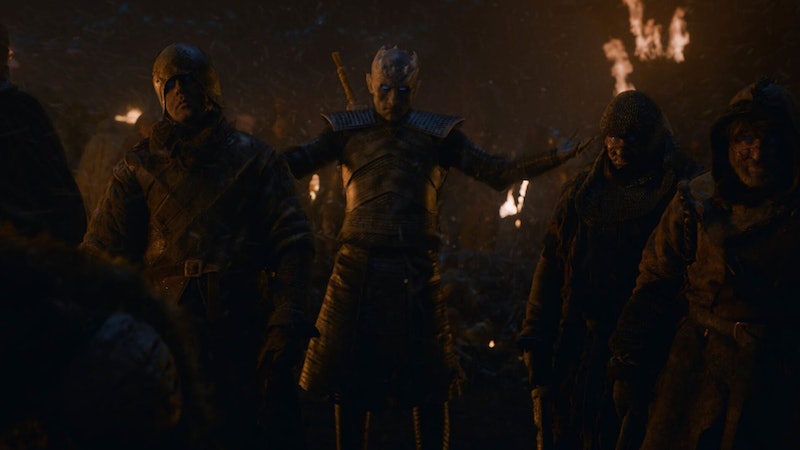 Spoilers for Season 8, Episode 3 of Game of Thrones ahead. The Battle of Winterfell has come and gone on Game of Thrones, and it took a lot of our faves — and one huge army — with it. The episode, titled "The Longest Night," was expected to be pretty stressful and devastating, but no one really could have prepared for the ending. Yes, a ton of the living died, but the Big Bad, The Night King, also turned to dust thanks to one Arya Stark. While celebration is welcome, there is one Reddit theory about the Night King's death you should know before you celebrate the end of this dude forever.

Arya was able to sneak an attack on the Night King as he was busy stalking after Bran, killing him in the same place he was created, at the Weirwood tree. And while he did shatter like ice, along with the other White Walkers and all the wights he had created, there's a strong theory going around Reddit that this isn't the last Night King to cause havoc of Westeros.

User itsmyst posted a theory on Reddit based on the fact that the Night King's death was a very anti-climatic ending for some fans. Of course, many were ecstatic that Arya came through and did that in the end, but for others, the thousands-year-old Night King went out too suddenly. Itsmyst points out a few other reasons they think the Night King isn't fully dead also: the prophecy wasn't fulfilled with the way he died, what's left of the army in the North isn't enough to go against Cersei, and it sort of sets it up for Bran to become the next Night King.

Let's break this all down, step by step.

Reddit user Itsmyst wrote, "Maybe [Bran] revives the army of the dead. Boom, instant army to fight against Cersei...," That would give the Northern leaders like Daenerys, Sansa, and Jon a huge advantage, since Cersei would have no idea it was coming and there would be tons more coming for her than men she has to fight. Plus, her Golden Company doesn't have the weapons necessary to kill White Walkers or wights (unless all their swords are Valyrian steel)."

Another user, highly_animated, also posted a similar theory that harkens back to Daenerys' "wheel" metaphor.

"Someone (we believe Bran or Jon) will sacrifice themselves in the Isle of Faces with a dragon glass dagger to the heart to become the next Night King. Since it was a willing sacrifice, they maintain humanity (like Benjen) long enough to raise the dead army again to defeat Cersei. Then we'd get a few scenes of our heroes traveling far north to the Lands of Always Winter to lock away the new Night King 2.0 for a 1000 years of slumber before the whole process repeats itself."

If Jon sacrifices himself to become the Night King and he is able to not turn evil, then he'd be able to wield the wights as he pleases, maybe even to overthrow Cersei. That, of course, hinges on a few things, like whether or not Jon would want to take up his birthright and sit on the throne. Knowing what we know about Jon, he's not really obsessed with power, so it's possible he won't want the Iron Throne or to become the king of the undead.

It's possible that Bran could then be the one to carry out this theory, but if he willingly becomes the Night King, does that mean he'll still be evil? The essential part of this theory is that after defeating Cersei, the new Night King with go off and hibernate for a thousand years before wreaking havoc on Westeros all over again. But the original Night King was unwillingly turned as a way to make him a weapon (which of course backfired). If you have a willing sacrifice, does that wheel really need to keep spinning that way?

Regardless, it's a fascinating theory, and would bring about a twist that will change the game completely. With Game of Thrones anything can happen, and the more outrageous or surprising something is, the more likely it'll happen. So who even knows at this point.

More like this
Everything To Know About Marvel's 'Echo' Series On Disney+
By Grace Wehniainen
'Bridgerton' Star Nicola Coughlan Confirms Season 3 Will Focus On Colin & Penelope
By Grace Wehniainen and Alyssa Lapid
What Does Doctor Strange’s Third Eye Mean?
By Arya Roshanian
Wait, Did Wanda Die In 'Doctor Strange And The Multiverse Of Madness'?
By Arya Roshanian
Get Even More From Bustle — Sign Up For The Newsletter