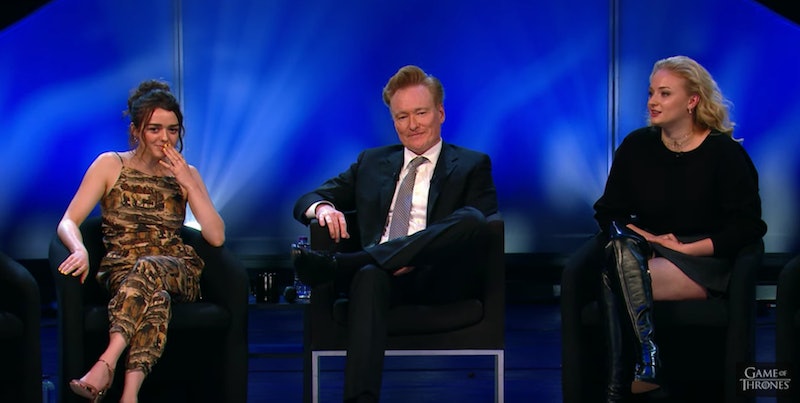 Game of Thrones via YouTube
By Jessica Wang
June 26, 2019

George R.R. Martin put forth the notion that when you play the Game of Thrones, you win or you die. But for the cast of the HBO medieval series, you win or you cringe at archived footage of your younger self. On Wednesday, June 26, HBO unveiled a new clip from its upcoming DVD collection, “Game of Thrones: The Complete Collection,” and in it, the Game of Thrones reunion clip showed the cast’s funny reactions to their younger selves. In an exclusive segment hosted by Conan O’Brien for the DVD collection, GoT actors Maisie Williams, Sophie Turner, Kit Harington, Isaac Hempstead Wright, and possibly Nikolaj Coster-Waldau (the clip makes this a bit indiscernible) were treated to archived footage of their younger selves throughout their journeys on the HBO fantasy drama.

“One of the innate things about Game of Thrones is that we’ve watched all of you — these performers here — grow as actors and also just grow,” O’Brien says before introducing the clip reel. “We have some pretty adorable footage." When the late night host unveils a clip of the baby-faced actors during the earlier seasons, they all react slack jawed and in awe at their former selves. In the hilarious reunion sneak peek, Turner brings her hands to the side of her face in reaction to a young Sansa Stark, while Harrington screams “F*ck off!” in reaction to a young Jon Snow.

The special clip aired by O’Brien also offered exclusive behind-the-scenes insights and interviews during the first few seasons of the show. In the footage, a smol Turner and a smol Williams both gush about their friendship that stemmed from depicting on-screen sisters. “Me and Maisie are best friends on set,” Turner says in the footage. “We met in the auditions. I think we’re gonna be friends for a long time.” Later in the clip, Williams gushes of Turner, “The most fun I had was working with Sophie. She’s my best friend. I mean, who else gets to go to work with their best friend.” Aw. Turner and Williams’ bond certainly continues to live on beyond the world of Westeros: Back in April, Turner confirmed that Williams would serve as a maid of honor in her upcoming summer nuptials to Joe Jonas.

As the clip comes to an end, Williams is absolutely beside herself. The actress said to O’Brien and the crowd, “So embarrassing. What are you doing to us?” She added, “This is horrible!” O’Brien, however, disagreed. “That was adorable,” the host quipped. “That was lovely! What are you talking about?” (That was totally adorable. A smol Williams is absolutely adorable.)

O'Brien's special reunion interview will be featured in the DVD release titled “Game of Thrones: The Complete Collection,” which will be available to purchase on December 3. Along with current stars, O’Brien will also interview previously departed characters from the hit series such as Sean Bean, Jason Momoa, Mark Addy, and much more. Along with all eight seasons of the hit HBO series, the limited-collection set will also feature over 15 hours of bonus content, such as 88 audio commentaries, the complete animated histories and lore collection, behind-the-scenes featurettes, and more, according to the official promotional video. The collection will be sold in a custom-designed wooden box case with panels designed by Robert Ball.

More like this
'Stranger Things' Season 4 Volume 2 Trailer Teases New Episodes Coming July 1
By Grace Wehniainen and Gabrielle Bondi
The 'Ms. Marvel' Review Bombing Controversy, Explained
By Radhika Menon
Everything To Know About 'The Hunger Games' Prequel Movie
By Grace Wehniainen and Radhika Menon
Fans Think Beyoncé’s “Break My Soul” Is Calling For A New Great Resignation
By Sam Ramsden
Get Even More From Bustle — Sign Up For The Newsletter