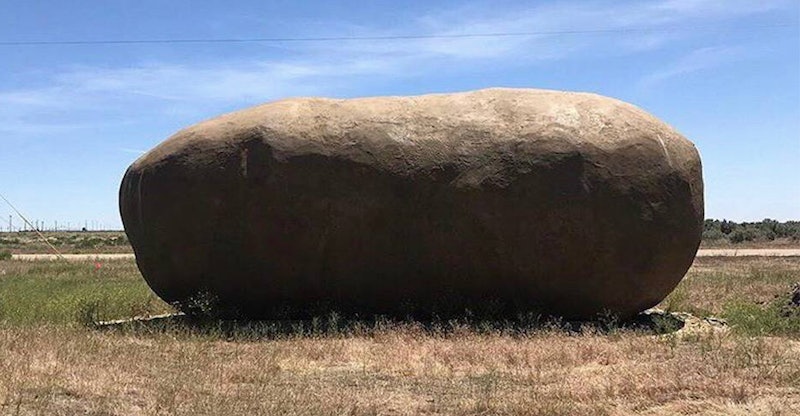 Sometimes dreams come true in the most unexpected ways. It had never occurred to me that a life dream of mine was to stay in a giant potato — but now that I know it's there, it's definitely a dream come true. That's right, there's a giant potato Airbnb in Boise, Idaho which is... well, it's exactly what it sounds like. The Big Idaho Potato Hotel is delivering some major big POTATO energy, right here — right now.

"Stay in a six-ton potato!" Kristie, the host, writes in the Airbnb listing. "This is the original potato that traveled countless miles across the country for the Idaho Potato Commission on the back of a semi truck!" I appreciate that this is the ORIGINAL potato that did that, rather than an inferior imposter. I also appreciate that she assumed I know what the Idaho Potato Commission is. There's a lot I like about this potato situation. Essentially, the potato travelled the country for six years on the back of a truck to raise awareness about potatoes, according to Insider. It's kind of a big deal in the giant potato world.

Even though on the outside it looks like, well, a massive potato, the digs are actually pretty lush. The potato has one queen bed perfect for two guests and comes with a fireplace and air-conditioning. It measures a whopping 28 feet long and 12 feet wide, making it officially the biggest potato I've ever heard of.

Made of plaster and with lovely pink accents, the inside of the potato is surprisingly modern — and also looks incredibly zen and cool. In fact, it's just like I would imagine the inside of a real potato to be, but without that weird moisture that you usually find inside a potato. Not that I spend a lot of time touching the inside of potatoes — BUT THEY'RE SURPRISINGLY COMFORTING.

How much does it cost to stay in a glorious potato? Well, as you can imagine, such regal and magical lodgings book up quick. But when I price checked it for a mid-week night in June, it ran up at $200 a night. Of course, there was also $31 service fee and $16 in occupancy taxes and fees — which means a single night will cost you about $247. Worth it for a night of potato-filled bliss and memories? Abso-effin-lutely. Side note: If you're looking for an affordable holiday, there seem to be tons of amazing places in Boise, Idaho on Airbnb on the cheap. Who knew?

It also looks like the ideal destination if you want a little peace and quiet. "The Potato Hotel is surrounded by 400 acres of farm land," the description explains. "The Union Pacific Railroad runs along the right side of the freeway. The only thing past us is the National Guard trains facility which hosts soldiers from all over the country." Weird flex, but sure.

Airbnb is already the home to amazing places to stay and super unique Airbnb experiences. Booking something to do on Airbnb is always a bit of an adventure — but staying in an actual potato just may be the biggest, most delicious adventure of all. Book soon, because if the universe loves potatoes a tenth of as much as I do, this will get booked up in a hurry.