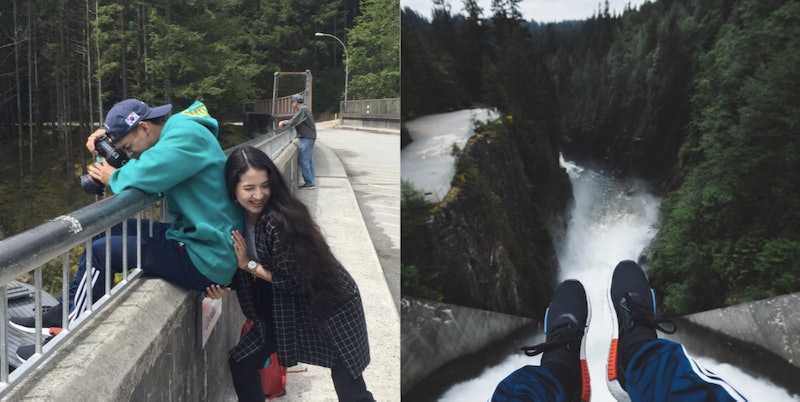 Sometimes, when I'm trying to be extra sweet for my boyfriend, I'll pick up his favorite chocolates or take out the trash for him; and then I pat myself on the back for being the best girlfriend ever. But recently, another gal has put us all to shame. Maybe you've seen the picture of this girlfriend helping her boyfriend get the perfect shot, but if you haven't, prepare to feel like a lackluster significant other.

Lorena Mora, a 21-year-old senior at San Francisco State University, has been with her boyfriend, Isaac Garcia, for almost four years. Isaac likes to take beautiful (read: gorgeous) photos. Recently, the adorable couple was vacationing in Vancouver, Canada, and Garcia needed a little help to get the perfect capture; so Mora gave him a hand. Two, actually. Garcia sat on a ledge that was too tiny to really grasp the angle that he wanted, so Mora pushed him up a little while he snapped away; the pic caught on and totally went viral. "Another tourist thought it was cute and offered to take a photo," Mora told Buzzfeed News. "Cute" is one way to describe the situation; although when I learned what Garcia was photographing, I mainly just got dizzy and a little nauseous — because, well, hello, vertigo!

In an email to Bustle, Mora explains that she and Garcia have taken more than one risky photo in their time together, going on rooftops when he first started working in photography: "He and I would sneak into hotels and parking structures around Los Angeles to take other ledge photos. Sometimes when we take vacations he wakes me up before sunrise and we sleep in the car so he can get that perfect sunrise photo." I'm not sure, but this just might be the coolest thing ever.

While it's probably safe to assume that the two lovebirds have had great experiences together, there are certain memories that stick out to Mora, like a photo they got in British Colombia, "where we climbed up the side of a mountain using a wire rope for support to get to the old train track bridge. Both of us walked along the railing to get a good ledge picture. The bridge was suspended over a fast moving river and to make things even worse it was raining making the ledge very slippery. However we both got up there and took some awesome photos!" This makes my Instagram selfies sound so lame.

While Garcia's photography clearly gets a lot of exposure (no pun intended), the popularity of their recent adventure caught them by surprise. Mora tells Bustle, "He's definitely grown in terms of reaching an audience over the years. He's worked with brands like Puma and KSWISS which for me is awesome, but nothing ever viral like this! It's kind of exciting!"

Garcia is certainly no one-hit wonder. Both Mora's and Garcia's Twitter pages are filled with his work, and the man undoubtedly has a gift behind the camera. In another tweet, Mora silenced any Negative Nancy who might be doubting her BF's skills, writing, "Isaac never uses photoshop. He takes his own raw images and edits them with presets he created himself. Don't discredit him!!"

Mora and Garcia don't have plans to stop their adventures, and another possible vacation is already being discussed: "So we've both been talking about visiting Thailand and Bali in the summer of 2018 right after I graduate with my Bachelors from San Francisco State University," Mora tells Bustle. "It's always been our dream to visit Bali!"

I don't use the words "relationship goals" very often, but if I were to, I'd use them now. This duo has it figured out. While I won't be hurrying to help my boyfriend hang over a wall anytime soon (because I'd probably accidentally shove him over), I certainly admire how great of a team Mora and Garcia make. Two thumbs up to you, friends! Keep taking breathtaking photos!

More like this
I Spent 2 Years Trying TikTok’s Dating Advice
By Kailynn Johnson
Learning To Love, Not Judge, The Lunchbox Wives Of TikTok
By Esther Zuckerman
How To Turn Off TikTok Profile Views So You Can Stalk Other Accounts In Secret
By Alexis Morillo
An Expert Weighs In On The Viral Raw Carrot Salad Trend
By Alexis Morillo
Get Even More From Bustle — Sign Up For The Newsletter