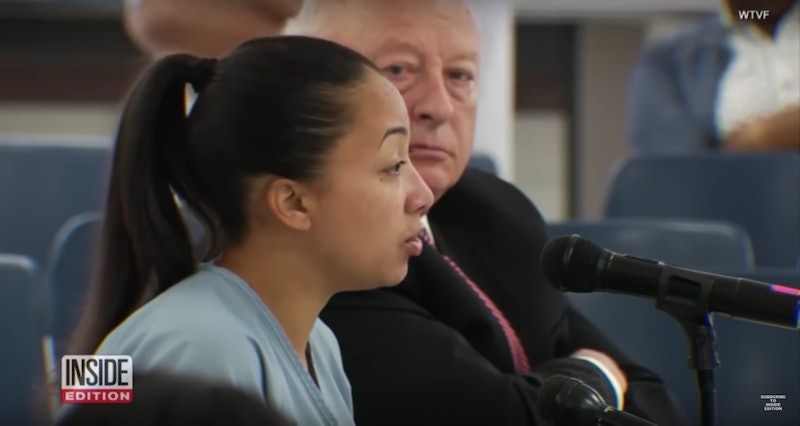 On Aug. 7, a Tennessee woman will be released from prison after being convicted of killing a man who solicited her for sex when she was 16. Advocates have pushed for her release for years, and now, a GoFundMe for Cyntoia Brown is collecting donations to help her transition to life outside of prison. Brown is now 31 years old and her story continues to spark conversations about both criminal justice reform and child sex trafficking.

Brown's GoFundMe page is titled "Cyntoia Brown - Second Chance Fund." The website notes that "while asking for financial help was not Cyntoia's intent or interest," there has been significant public interest in supporting her. Therefore, her representatives decided to organize and oversee a GoFundMe campaign. The page notes that all funds raised will be "securely placed into a trust fund established for Cyntoia's use and direction." It also adds that "Cyntoia appreciates your support and is continuing to focus her efforts on finishing her Bachelor's degree from Lipscomb University and preparing to leave prison." You can donate to the campaign simply by clicking on the "donate now" button on the upper right side of the page.

"(She) is focused immediately on completing her college coursework and taking the steps necessary to transition from prison to the free world in August," Zach Hunt, a spokesperson for Brown, told the Nashville Tennessean. "Long-term, her interest is helping other young girls avoid the places she has been."

As the Nashville Tennessean reported, Brown ran away from home at 16. The outlet added that, soon afterward, she says she met a man named "Kut Throat" who regularly physically and sexually assaulted her — and forced her to engage in prostitution in order to earn money.

In August 2004, Brown said Kut Throat sent her out to earn money and she met 43-year-old Johnny Allen at a Sonic restaurant — and he offered to pay her to have sex with him, the Nashville Tennessean indicated. Allen took Brown to his home, where she says he frightened her by talking about guns and his military experience, the outlet added. At one point, Brown said she feared Allen was reaching for a gun, so she shot him in the back of the head, the outlet noted. Prosecutors argued her intent was to steal, and she was sentenced to life in prison, with no possibility for parole until she served 51 years, Refinery29 noted.

In recent years, the case received increased public attention, especially after a documentary entitled Me Facing Life: Cyntoia's Story was released in 2011, the Nashville Tennessean reported. As The Cut noted, many questioned why a child survivor of sex trafficking who claims to have committed a crime while being forced to engage in prostitution was facing a lengthy prison sentence.

In January 2019, likely in response to some of this outcry, Tennessee Governor Bill Haslam announced that he was commuting Brown's sentence, saying it was too harsh, the New York Times reported. The paper added that, when Brown is released on Aug. 7, she will have served 15 years in prison. She will then be expected to spend 10 years on parole following her release.

If you would like to help give Brown some financial security as she approaches her release date, donating to her GoFundMe is likely the best way to do so. Moreover, if Brown's story resonated with you and you want to help fight for juvenile justice reform, consider donating to related advocacy organizations, like the Coalition for Juvenile Justice and the Campaign for Youth Justice.