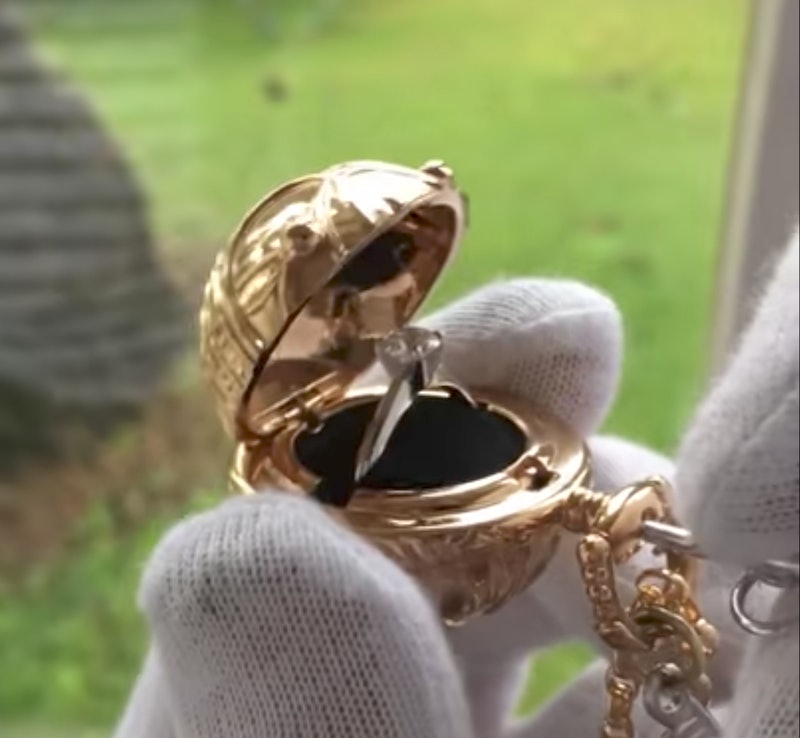 Getting engaged is already an exciting moment in anybody's life, but this Golden Snitch engagement ring box has just seriously upped the game. Now, Harry Potter-loving hopeful romantics can hide an engagement ring inside a beautiful Golden Snitch made of sterling silver and yellow gold, locked with a key shaped like Harry's Nimbus 2000. The Snitch ring box is designed by Freeman Jewellery, and can double up as a beautiful necklace, even once the ring is safely on your or your loved one's finger. I think even a clumsy Muggle like me could manage to beat Harry to the Snitch if I knew there was such an exciting surprise inside.

I mean, why wouldn't you want your special moment to involve as many Harry Potter references as possible? Potterheads have been throwing Harry Potter-themed weddings for years, and "Always" has worked its way into many a wedding vow. I've even heard of a Marauder's Map proposal from one particularly dedicated wizard — but turning a proposal into a romantic game of Quidditch is a level of magic even J.K. Rowling couldn't make up.

On the caption of a YouTube video uploaded by Freeman Jewellery, the company explained that they were commissioned to make the Snitch ring box by a super-romantic customer — but I wouldn't be surprised if we see a lot more Golden Snitch proposals in our future now that this gorgeous ring box exists in the world.

Harry and Ginny were both talented Seekers on the Quidditch field — so an engagement ring hidden in a Golden Snitch would have made a perfect way to make their love official. Now we just need J.K. Rowling to confirm this theory...